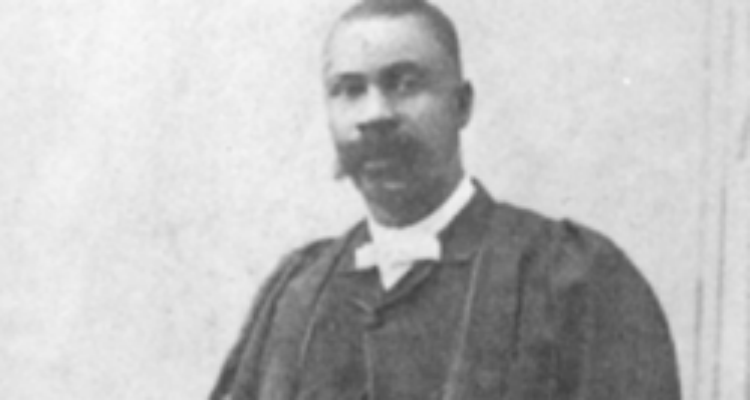 Delos Rogest Davis, teacher and lawyer (August 4, 1846- April 13, 1915) was the second Black lawyer in Canada and the first Black person appointed to the King’s Counsel in all of the British Empire.

Born to enslaved Africans in Maryland, Delos Davis was raised in Colchester Township, near Windsor, Ontario, after his family sought their freedom using the Underground Railroad to reach Canada. He worked as a teacher, and then chose to study law in Windsor. After his marriage and move to Amherstburg, he qualified to practice as a notary public by 1873.

In spite of his education and familiarity with the law, Davis faced significant obstacles in becoming a member of the Bar, as prevailing racist attitudes prevented him from finding a lawyer with whom he could work as an articling student. In the mid-1880s, Davis convinced local MPP William Douglas Balfour to introduce a special law that would permit him to practice as a solicitor provided he passed the examination administered by the Law Society of Upper Canada. Balfour was able to pass the act, and Davis passed the exam on 19 May 1885. The following year he again successfully petitioned the Ontario legislature, which passed another special act enabling Davis to become a barrister. After years of struggle, on 15 November 1886, Davis became the second Black Canadian ever called to the Bar of Ontario. He was preceded by Robert Sutherland.

Davis established his practice in Amherstburg in 1887, and went on to specialize in criminal and municipal law. He served as counsel in six high-profile murder cases, — defending in five and prosecuting in one — all of which he won. His primary focus, however, was in drainage litigation — a field of unique importance to the agricultural community in low-lying Essex County, Ontario. Davis’s son Frederick Homer Alphonso studied at Osgoode Hall Law School in Toronto and joined Davis’ practice in 1900. Father and son worked together for five years.

In 1910, after 23 years of practice, Davis was appointed King’s Counsel — the first Black person so honoured in all of the British Empire.