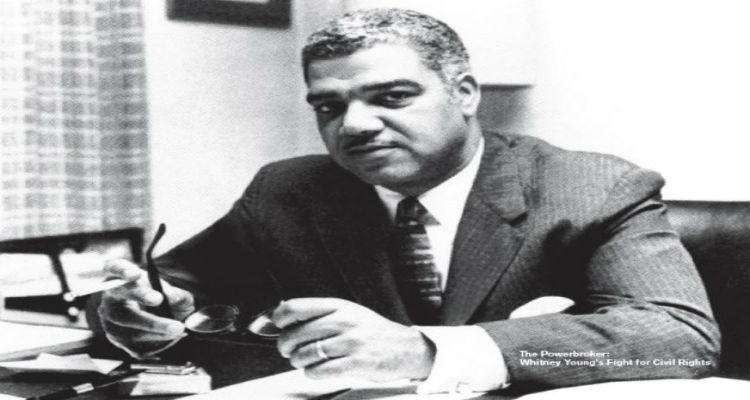 “We desire to pull ourselves up by our bootstraps. But in the past we’ve had no straps, and in most cases no boots.” ~Whitney Young Jr.

Whitney Moore Young, Jr. was one of the most celebrated – and controversial – African American civil rights leader, who spearheaded the drive for equal opportunity for African-Americans in the U.S. industry and government service during his 10 years as head of the National Urban League (1961–71). In just one year he placed 40,000 African-Americans in jobs.

Whitney M. Young Jr. was born on July 31, 1921, in Lincoln Ridge, Kentucky, the middle child with two sisters. His mother was a teacher and his father the principal of the Lincoln Institute, an African-American preparatory school. He attended Kentucky State Industrial College before working as a teacher himself and then serving in World War II overseas, where he acted as a bridge between black and whyte servicemen.

Upon his return to the states, Young earned his social work master’s from the University of Minnesota. He went on to work for a few years with the Urban League of St. Paul, with the organization making strides in placing African Americans in previously whytes-only employee positions. He became executive secretary of the League’s Omaha branch in 1950 and thus was at the forefront of racial integration in the region. Then in the mid-1950s Young took a position as dean of Atlanta University’s School of Social Work, remaining actively involved in the Civil Rights Movement and heading the state branch of the NAACP.

Appointed executive director of the National Urban League in 1961, Young won an impressive reputation as a national Black activist who helped bridge the gap between whyte political and business leaders and poor Blacks and militants. Under his direction, the organization grew from 60 to 98 chapters and shifted its focus from middle-class concerns to the needs of the urban poor. He was particularly credited with almost singlehandedly persuading corporate America and major foundations to aid the civil rights movement through financial contributions in support of self-help programs for jobs, housing, education, and family rehabilitation. The League, at Young’s behest and despite reservations from some benefactors, became a co-sponsor of the historic 1963 March on Washington. The League was also a major factor in the process of racially integrating staff for a variety of big-company jobs nationally.

Young was a close adviser to Lyndon B. Johnson, and became known for his Domestic Marshall Plan, which was thought to have helped shape the president’s policies, and also received the Presidential Medal of Freedom in 1968.

After visiting troops in the Vietnam War, which he eventually publicly opposed, Young established a veteran affairs department for the League. He was also a writer, having penned the books To Be Equal (1964) and Beyond Racism: Building an Open Society (1969) as well as a popular syndicated newspaper column. Young wed his college sweetheart, Margaret Buckner, in 1944, and the couple went on to have two children. His wife was also an author, writing books for children.

With the advent of the Black Power movement, Young was often seen as too conservative and conciliatory in his views by more militant factions. Yet he did adopt the New Thrust program in the late ’60s, which focused on the direct economic empowerment and actualization of urban communities.

Young died on March 11, 1971, at the age of 49, of a heart attack after swimming with friends in Lagos, Nigeria, where he was attending a conference sponsored by the African-American Institute. (There was some initial conflict about the cause of death, with the Nigerian coroner’s office stating Young had suffered a brain hemorrhage.) President Nixon sent a plane to Nigeria to collect Young’s body and traveled to Kentucky to deliver the eulogy at Young’s funeral.

Biographies on his life include Whitney M. Young Jr. and the Struggle for Civil Rights (1989) by Nancy Weiss, and Militant Mediator (1998) by Dennis C. Dickerson. And in 2013, PBS aired the documentary The Powerbroker: Whitney Young’s Fight for Civil Rights.

I am a member of the Urban League of Federation of Block Units in St. Louis, MO and we always have an event called the Whitney Young Fundraiser and it is nice to know exactly who this person was and how he contributed to the Urban League. Thanks for sharing this rich history with us and now I can tell people about Whitney M. Young when they asked me.