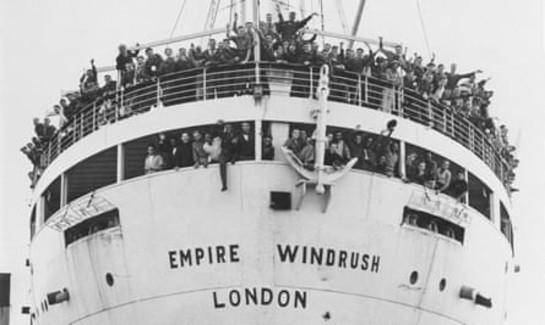 “What were they thinking these 492 Jamaicans, as the Empire Windrush slid upstream with the flood between the closing shores of Kent and Essex? Standing by the rail this morning high above the landing-stage at Tilbury, one of them looked over the unlovely town to the grey-green fields beyond and said, ‘If this is England I like it.’ A good omen, perhaps. May he and his friends suffer no sharp disappointment.” —Manchester Guardian, June 23, 1948

On June 22, 1948, the Empire Windrush arrived at the port of Tilbury, Essex and four hundred and ninety-two people from the West Indies came ashore. These African-Caribbeans who came “with hope in their eyes’ were the beginning of the modern history of Black people in the United Kingdom (UK). Within a decade later, nearly 125,000, had made a similar journey across the Atlantic to the UK. They would become known as the Windrush Generation.

After WWII, Britain encouraged immigration from Commonwealth countries, to help rebuild the country as there was a labor shortage crisis. The British Nationality Act 1948 was going through parliament, when the Empire Windrush, docked in Kingston, Jamaica, to pick up servicemen who were on leave. The Act was granting the status of citizenship to people of the commonwealth, giving them the right to live and work in Britain. With the ship being far from full, an opportunistic advertisement was placed in a Jamaican newspaper offering cheap transport on the ship for anybody who wanted to come and work in the UK.

Most of the Windrush migrants, who took up the opportunity were young adult men, including a number of ex‐servicemen, a small group of boxers, and the Trinidadian calypso artist Lord Kitchener (Aldwyn Roberts). As he disembarked he was met by a film crew from Pathe News, who asked him to perform his newly composed song, ‘London is the Place to Be’. Like Lord Kitchener, most were enticed to Britain by the prospect of long-term job opportunities and prosperity (some believed that the streets were paved with gold); to get an education, and others had decided to make the journey just to see what the ‘mother country’ was like. The journey to Britain cost £28 for travel on the troopdeck (around £1,000 today) and £48 for cabin class travel.

The British government, however, did not welcome their arrival; and viewed it as an ‘invasion’ of Britain by West Indians.

The British government had hoped to receive Commonwealth migrants from Canada, South Africa, Australia and New Zealand; people of European descent. Therefore, the government went into a panic over who had authorized the West Indians to come to the UK. There had even been attempts to prevent the Windrush from leaving Jamaica. The Prime Minister had made enquiries as to whether the Windrush might be diverted to East Africa, where the migrants would be offered work on groundnut farming projects there. However, once it became clear that the government could not prevent the migrants who were British subjects from coming, they changed their strategies. The Windrush migrants were to be dispersed across the country, and while this was being arranged they were warehoused in an old deep-level air-raid shelter near Clapham South underground station, which was reopened to accommodate them. The Minister of Labour, George Isaacs, was quick to warn that rather than opportunities, the Windrush migrants should expect to encounter difficulty and disappointment.

Nevertheless, when the Empire Windrush docked at Tilbury on 22 June, the passengers were greeted with some degree of civility. Most of this initial group subsequently found employment within a month, and gradually were able to establish themselves within the community at large.

Today the arrival of the Empire Windrush is viewed as a turning point in the recent history of Britain and has come to symbolize the many ways in which Caribbean people have contributed to and transformed aspects of British life. The Windrush was, however, just one of a whole series of ships that would subsequently bring African-Caribbean immigrants to Britain over the next thirteen years. The Empire Windrush herself played no further role in this movement of people from the West Indies and was lost at sea after a massive fire in her engine room in March 1954.

Source:
The Oxford Companion to Black British History edited by David Dabydeen
With Hope in Their Eyes by Vivienne Francis
Black and British: A Forgotten History by David Olusoga
https://en.wikipedia.org/wiki/HMT_Empire_Windrush
https://www.thehistorypress.co.uk/articles-windrush-a-landmark-in-the-history-of-modern-britain/