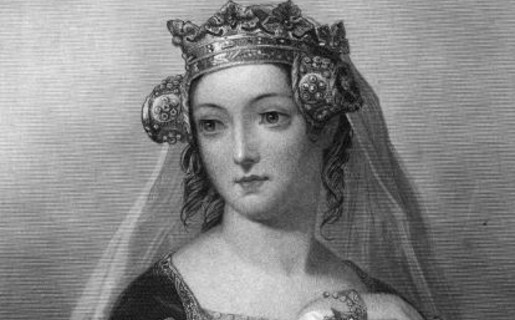 According to 100 Great Black Britons website, Queen Phillipa is England’s first Black queen and mother of the Black Prince.

Philippa of Hainault was born on June 24, 1313, the daughter of the Count of Hainault; in an area that had once been ruled by the Moors. She was one of eight children and the second of five daughters. Phillipa who became the Queen of England as the wife of King Edward III is usually depicted with a pale complexion. However, when she was nine the King of England, Edward II, decided that he would marry his son, the future Edward III, to her, and sent one of his bishops, a Bishop Stapeldon, to look at her. The bishop described her thus:

“The lady whom we saw has not uncomely hair, [between] blue-black and brown. Her head is cleaned shaped; her forehead high and broad, and standing somewhat forward. Her face narrows between the eyes, and the lower part of her face is still more narrow and slender than the forehead. Her eyes are blackish brown and deep. Her nose is fairly smooth and even, save that is somewhat broad at the tip and flattened, yet it is no snub nose. Her nostrils are also broad, her mouth fairly wide. Her lips somewhat full and especially the lower lip…all her limbs are well set and unmaimed, and nought is amiss so far as a man may see. Moreover, she is brown of skin all over, and much like her father, and in all things she is pleasant enough, as it seems to us.”

Four years later Prince Edward went to visit his bride-to-be and her family and fell in love with her. She was betrothed to him, and in 1327 when she was only 14, she arrived in England. The next year, when she was 15, they married and were crowned King and Queen in 1330 when she was heavily pregnant with her first child and only 17.

This first child was called Edward, like his father, but is better known as the Black Prince. Many say that he was called this because of the color of his armor, but there are records that show that he was called ‘black’ when he was very small. The French called him ‘Le Noir’.