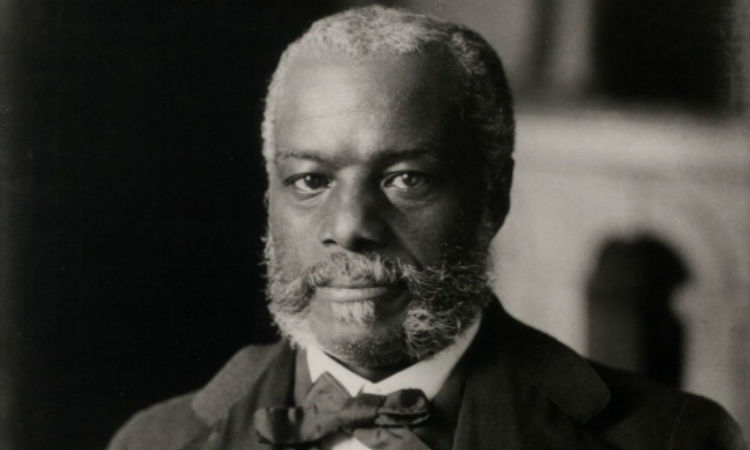 [dropcap size=small]W[/dropcap]illiam Sanders Scarborough is generally thought to be the first African American classical scholar. Born into slavery, Scarborough became a world-respected scholar of Greek and Latin literature and served as president of Wilberforce University between 1908 and 1920. Fluent in a number of classical languages, he wrote a popular university textbook in Classical Greek that was widely used in the 19th century.

William S. Scarborough was born on February 16, 1852 in Macon, Georgia to a free Black father and an enslaved mother. He inherited his mother’s status. Despite prohibitions against educating bondpeople, he was educated surreptitiously and had mastered the three R’s, geography, and grammar by the age of 10. He became an apprentice shoemaker and served as the secretary of a prominent black association at an early age due to his level of education.

After the end of the American Civil War, he was able to complete his education at Lewis High School in Macon before attending Atlanta University in 1869 for a couple of years. Scarborough completed his degree at Oberlin College in 1875.

Scarborough returned to Lewis High School where he taught classical languages. He met Sarah Bierce, a whyte missionary, who was then Principal and who would eventually become his wife in 1881. After arsonists set fire to the high school in 1876 and the Macon fire department let it burn to the ground, Scarborough moved to South Carolina. He found the racial environment there “even worse than Georgia,” and after a brief period as Principal of Payne Institute in Cokesburg, South Carolina, he returned to Oberlin to complete a master’s degree.

In 1877, twenty-five year old Scarborough became a professor of Latin and Greek at Wilberforce University in Xenia, Ohio. To help his students Scarborough wrote a textbook, First Lessons in Greek. The book was published in 1881 and eventually became widely used in colleges and universities throughout the nation including Yale University. Scarborough published a second book, Birds of Aristophanes in 1886.

In the 1880s, joined two whyte scholarly organizations. He was the third African American to join the American Philological Association *APA) and the first to join the Modern Language Association (MLA), the latter of which has named a first-book prize in his honor.

According to Michele Ronnick, professor in the Classics Department of Wayne State University, who found a copy of Scarborough’s unpublished autobiography, Scarborough endured many insults and financial problems. For example, in 1909 when he had just become the president of Wilberforce, he was barred from attending an American Philological Association meeting in Baltimore, Maryland, because the hotel refused to serve dinner if he was present and was threatening to sue for breach of contract if the Association canceled the Conference. The paper that he was due to read at the conference was read by someone else.

“For 40 years,” Ronnick concluded, “Scarborough was an engaged, intellectual citizen and educator. He broke barriers of race and class and flew in the face of those who entertained ideas of intellectual inferiority of his race. He also refuted those who put down his pursuits as Uncle Tom-ism. His command of classical languages enabled the next generation of Black scholars to advance farther in other fields.”

When Scarborough felt oppressed by his failure to get good wages, promotions and diplomatic appointments, his friend and fellow Black classicist Richard T. Greener encouraged him, said Ronnick, “Greener reminded him of the story of the Athenian statesman Aristides, known as ‘the Just’ for his integrity, in Plutarch’s ‘Lives.’ Facing a vote on his ostracism, which meant banishment from Athens, Aristides met a peasant and asked him how he planned to vote. For ostracism, the peasant replied. Aristides asked the peasant why he wanted to punish a man he didn’t know. “It vexes me to hear him called the Just,” the peasant replied.

“Greener,” Ronnick said, “told Scarborough his fate was like Aristides’s.”

Scarborough also became, in 1896, the first prominent scholar to challenge Booker T. Washington’s vision for industrial education. He argued, through his influential articles, that blacks, like whytes, were capable of succeeding with a liberal arts education.

In 1908 Scarborough was named President of Wilberforce University, a post he held until 1920. Wilberforce University was the third oldest African American college and Scarborough was considered one of the leading African American scholars. During his tenure as President he continued to write and publish in linguistics and to speak out on race relations.

In 1921, President Harding appointed Scarborough to a position in the United States Department of Agriculture which he occupied until his death. He was working on an autobiography which wasn’t published during his lifetime.

A copy of the manuscript was discovered in the archives of the Ohio Historical Society. Ronnick edited The Autobiography of William Sanders Scarborough: An American Journey From Slavery to Scholarship, which was published in 2005 by Wayne State University Press with a foreword by Henry Louis Gates.

Scarborough was a participant at the London session of the second Pan-African Congress held in 1921.

I am producing a documentary called “Business in the Black-The rise of black business in America, 1800’s-1960’s due out this fall. Like it on facebook for more information.