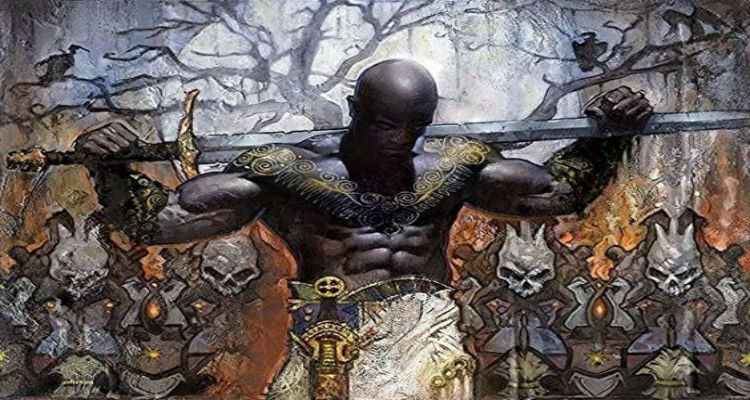 John Caesar (1764 – 15 February 1796), nicknamed ‘Black Caesar’ was the first Australian bushranger and one of the first people of recent African descent to arrive in Australia. A bushranger was usually a thief who lived in the Australian bush. A few bushrangers became famous and were seen as heroes like men such as Robin Hood, or Jesse James and Billy the Kid. The popularity of bushrangers and their ethos of ‘fight before surrender’ was commemorated in bush songs and folklore.

It is believed that Caesar was born in Madagascar or the West Indies. He was a servant living in the parish of St Paul, Deptford, England, in 1786. On 13 March that year at Maidstone, Kent, charged with the theft of some £12 from a dwelling house, he was sentenced to transportation to the penal colony of New South Wales for seven years. He was imprisoned on the Alexander, a convict transport ship in May 1787 and was part of the First Fleet, which arrived in Botany Bay in January 1788. By then he was popularly known as ‘Black Caesar’.

However, the meagre rations handed out to the convicts meant that they were starving, and for a big man like Caesar, the hunger pains must have been unbearable. On 29 April 1789 he was once more tried for theft at the Criminal Court and sentenced to a second term of transportation, this time for life. Fourteen days later he escaped into the bush, reportedly with some provisions, an iron pot, and a stolen musket. For some time he and several other “bolters” who joined him managed to survive. A dearth of game prevented him from sustaining himself however, and he began to steal food on the outskirts of the settlement. On the night of June the 6th he was apprehended and sent to work in chains at Garden Island.

Later allowed to work without chains, on 22 December Caesar escaped in a stolen canoe, again taking a gun. His efforts to survive in the bush—by robbing settlers’ gardens, threatening encamped Aborigines and taking their food—were fruitless, and on 31 January 1790 he returned to camp, having been speared by local Aborigines.

On 4 March Governor Phillip sent Caesar in the Supply to Norfolk Island. There he gained a measure of independence. By 1 July 1791 he was supporting himself on a lot at Queenborough and was issued with a hog. In January next year he was given one acre and ordered to work three days a week. His daughter by Anne Power, a convict who had arrived in the Lady Juliana in 1790, was born on 4 March 1792. Caesar returned to Port Jackson in the Kitty twelve months later, leaving behind Anne (who died in 1796) and his daughter. He decamped in July 1794 but was soon back in custody. After severe punishment, he declared exultantly and with contempt: ‘all that would not make him better’.

Caesar gained some notoriety during his lifetime for his part in wounding the infamous Aboriginal warrior Pemulwuy by cracking his skull. Late in 1795 he was with a party at Botany Bay that was attacked by Aboriginal warriors led by Pemulwuy.

Caesar escaped from custody for the last time in December 1795 and led a gang of absconders and vagabonds in the Port Jackson area—becoming Australia’s first bushranger. On 29 January 1796 Governor Hunter offered a reward of five gallons of spirits for his capture. On 15 February Caesar was shot by John Wimbow at Liberty Plains (Strathfield) and died after being carried to Thomas Rose’s hut.

He was survived by his daughter, Mary Ann Fisher Power, who went to Van Diemen’s Land in 1813.

*No image of John Caesar is available. Image used is “Swordsto” by Terese Nielson