Crawford Goldsby was a 19th-century American outlaw, known by the alias Cherokee Bill. Responsible for the murders of seven men (including his brother-in-law), he and his gang terrorized the Indian Territory for over two years. 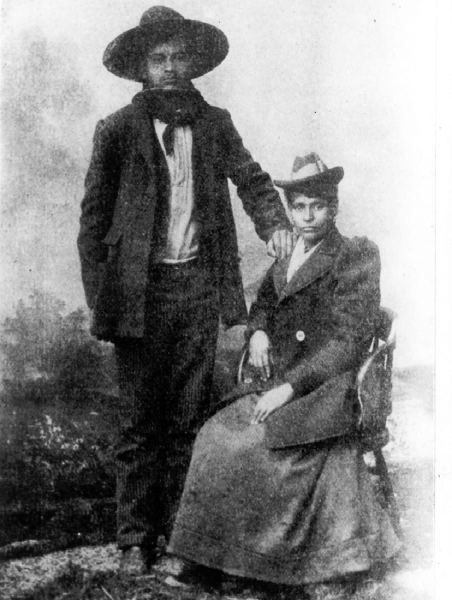 Goldsby was born on February 8, 1876 at Fort Concho, Texas, the son of George Goldsby, a buffalo soldier of mixed-race descent, and a woman named Ellen Beck, with mixed African, Indian and whyte ancestry. Goldsby’s father served as a hired servant with a Confederate infantry regiment during the American Civil War. While serving at Gettysburg, he fled and went to Harrisburg, where he worked as a teamster in a Union quartermaster unit and subsequently enlisted as a whyte man in the 21st Pennsylvania Cavalry Regiment under the name of George Goosby. (The spelling sometimes varied between Goosbey and Goosley). After the Civil War ended, he returned to the Selma area. During his last visit, the word was out that he would be captured and lynched for fighting with the Union Army, after which time he departed the area for the Indian Territory.

In 1867, George Goldsby enlisted in the 10th Cavalry Regiment (Buffalo Soldier) under his proper name, and by 1872 was promoted to sergeant major. After the expiration of his five-year term, he re-enlisted and became first sergeant of Company D, 10th Cavalry.

During 1878 (when Crawford Goldsby was two years old), serious trouble began to occur in San Angela (San Angelo), Texas, between Black soldiers and cowboys and hunters. The incident that led to the largest confrontation took place in Morris’ saloon. A group of cowboys and hunters ripped the chevrons from the sleeves of a Company D sergeant and the stripes from his pants. The soldier returned to the post and enlisted the aid of fellow soldiers, who armed themselves with carbines and returned to the saloon. A blazing gunfight commenced, resulting in one hunter being killed and two others wounded. One private was killed and another wounded.

Texas Ranger Captain G. W. Arrington, along with a party of rangers, went on-post (at Fort Concho) in an attempt to arrest George Goldsby, charging that he was responsible for arming the soldiers. Colonel Benjamin Grierson, post commander, challenged the authority of the rangers in a federal fort. George Goldsby apparently knew that the Army could not, or would not, protect him away from the post, so he went AWOL. He escaped from Texas into the Indian Territory.

Sometime after being abandoned at Fort Concho, Ellen Beck Goldsby moved with her family to Fort Gibson, Indian Territory. She left Crawford Goldsby in the care of an elderly Black woman known as “Aunty” Amanda Foster. She cared for him until he was seven years old, and then he was sent to the Indian school at Cherokee, Kansas. Three years later, he was sent to the Catholic Indian School at Carlisle, Pennsylvania. At the age of 12, he returned home to Fort Gibson.

Upon returning home, Goldsby learned that his mother had remarried. After departing Fort Apache, on June 27, 1889, Ellen married William Lynch in Kansas City, Missouri, before proceeding to Fort Gibson. Goldsby did not get along with his new stepfather. It was around that time that he began to associate with a bad crowd, drank liquor, and generally rebelled against any authority. Two years later, at the age of 15, he moved from his mother’s house to his sister Georgia’s and her husband. By the time he was 17, he was working a ranch, where he said to have been well-liked. However, that would all change the very next year when he would begin his outlaw career, becoming one of the most dangerous and feared men in Indian Territory.

In the spring of 1894, at the age of 18, Goldsby’s crime spree began when he shot a man named Jake Lewis for beating up his younger brother. Though Lewis would later recover from his wounds, Bill was sure he had killed the man and fled for the Creek and Seminole Nations, where he joined up with outlaws Jim and Bill Cook, who were mixed-blood Cherokees. By this time, Goldsby had adopted the nickname of Cherokee Bill. Apparently the name derived from his Cherokee heritage and his attendance at the Indian School at Cherokee, Kansas. In the Cherokee country the name “Bill” meant “wild hand,” not a person to run counter to.

After the assault on Jake Lewis, Goldsby riding with the Cook Gang began to terrorized the Cherokee and Creek Nations during 1893 and 1894. Their crimes started off small with whiskey charges and stealing horses, but soon led to train robberies, stage holdups, and bank theft. During this time, Goldsby’s hair started to fall out due to a disease inherited from his grandfather. The disease left him with so little hair on his head, he decided to shave the remainder off.

In June, 1894, the trio was confronted at Fourteen Mile Creek near Tahlequah, Oklahoma with a warrant for Jim Cook. In the inevitable shoot out that occurred, Goldsby shot and killed lawman Sequoyah Houston. Jim Cook was also badly wounded and the other two took him to Fort Gibson. Forced to leave him, he was later captured by lawmen. In the meantime, Goldsby rode to the home of his sister, Maud Brown, hiding from the law. When her husband, George Brown, a vicious drunk, began to beat Maud with a whip for not responding quickly enough to his orders, Bill walked up behind the man and shot him to death.

Afterwards, Bill Cook and Goldsby rounded up a gang, mostly comprised of Black men with Indian blood and began to terrorize Oklahoma. The outlaws were ruthless, shooting anyone who got in their way.

On July 16th, the gang allegedly robbed a man named William Drew and two days later, held up the Frisco train at Red Fork. However, due to the express messenger having had the foresight to hide the money behind some boxes, the gang escaped with very little.

On July 31, 1894, the gang stole $500 from the Lincoln County bank in Chandler, Oklahoma, killing one person and wounding others. In the process, one member of the gang, Elmer Luca, was shot and captured by authorities.

Hotly pursued, the Cook Gang was surrounded at the home of a friend some fourteen miles west of Sapulpa, Oklahoma on August 2, 1894. During the volley of gunshots, one of the lawmen was shot and severely wounded. Two of the gang members, Lon Gordon and Henry Munson were killed and Ad Berryhill was captured. The rest of the gang fled.

Continuing with their outlaw deeds they robbed the J.A. Parkinson & Company store in Okmulgee, Oklahoma on September 21st, getting away with over $600.00.

Several weeks later, the gang got really daring when on October 11th they first robbed the depot of the Missouri Pacific Railroad in Claremore, Oklahoma and less than two hours later, robbed the railroad agent at Chouteau.

Just some nine days later, they wrecked the Kansas City and Pacific Express five miles south of Wagoner, Oklahoma, making off with the loot.

Ever continuing their ruthless path through Oklahoma, Goldsby along with several other members of the gang, rode into Lenapah on November 8th. While robbing the Shufeldt and Son General Store, an innocent passerby named Ernest Melton was killed by Goldsby.

Because of the Melton murder incident, the authorities stepped up their pursuit for Goldsby and the Cook Gang. With the pressure on, the gang split up. Most of the men were captured or killed, but Goldsby managed to escape. When the authorities offered a $1300 reward for the capture of Goldsby, some of his acquaintances came forward and agreed to help.

On January 30, 1895, Goldsby was captured by Constables James McBride and Henry Connelly and taken to Fort Smith, Arkansas, to wait for his trial. On April 13, 1895, he was sentenced to death after being tried and convicted for the murder of Ernest Melton. However, his lawyer managed to postpone the execution date.

In the meantime, Goldsby had made a friend, Sherman Vann, who was a trusty at the jail. Sherman managed to sneak a six-gun into Goldsby’s cell. On July 26, 1895, Goldsby attempted a jail break with it. He jumped the night guards as they came to lock him into his cell. A guard, Lawrence Keating, was shot in the stomach. As Keating staggered back down the corridor, Goldsby shot him again in the back. Other guards arrived and prevented Goldsby from escaping, but were not able to enter the jail either. Then another prisoner, Henry Starr, convinced the guards to let him go in and get Goldsby out. Moments later he came back with Goldsby, who was unarmed.

The second trial lasted three days, resulting in a guilty verdict and U.S. District Judge Isaac Parker sentenced Goldsby to be hanged on September 10, 1895. A stay was granted, pending an appeal to the Supreme Court. On December 2, the Supreme Court affirmed the decision of the Fort Smith court and Judge Parker again set the execution date as March 17, 1896.

On the morning of March 17, Goldsby awoke at six to have a smoke break. He ate a light breakfast sent from the hotel by his mother. At 9:20, his mother and “Aunty” Amanda Foster were admitted to his cell and shortly afterwards Father Pius arrived.

The hanging was scheduled for 11 am, but was delayed until 2 pm so his sister Georgia could see him before the hanging. She was scheduled to arrive at 1 pm on the eastbound train.

Shortly after 2 pm while on the gallows, it was reported Goldsby was asked if he had anything to say and he replied, “I came here to die, not make a speech.” About 12 minutes later, Crawford “Cherokee Bill” Goldsby, the most notorious outlaw in the Territory, was dead.

The body was placed in a coffin, which was placed in a box and taken to the Missouri Pacific depot. Placed aboard the train, Ellen and Georgia escorted the body to Fort Gibson, Oklahoma, for interment at the Cherokee National Cemetery.