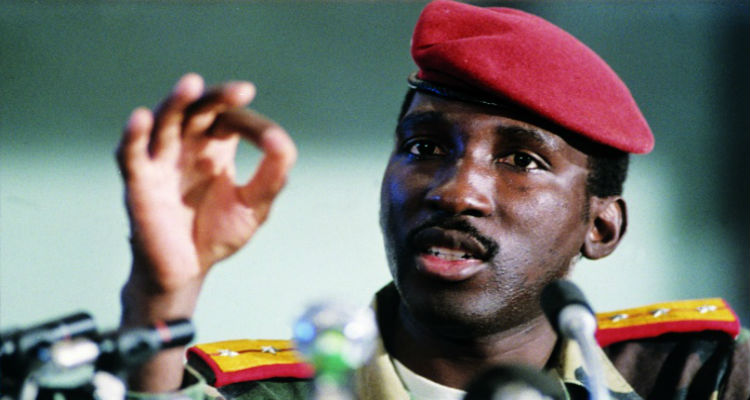 Thomas Sankara, President of Burkina Faso, murdered in a coup, aged 37, was the leader of the Burkinabe Revolution. Sankara, a pan-Africanist, transformed the French annexed land of Upper Volta into Burkina Faso, which means “Land of the Upright Men”. After becoming the president in 1983, Sankara launched nationalization, land redistribution, and social programs. Thomas Sankara belongs to a bright constellation of African leaders who wanted to give the continent in general and their countries in particular a new socio-political dimension.

“While revolutionaries as individuals can be murdered, you cannot kill ideas”.

“I think the most important thing is to bring the people to a point where they have self-confidence, and understand that they can, at last be the authors of their own wellbeing.”

“Imperialism is a system of exploitation that occurs not only in the brutal form of those who come with guns to conquer territory. Imperialism often occurs in more subtle forms, a loan, food aid, blackmail . We are fighting this system that allows a handful of men on earth to rule all of humanity.”

“We must learn to live the African way. It’s the only way to live in freedom and with dignity.”

“We are not against progress, but we do not want progress that is anarchic and criminally neglects the rights of others.”

“Inequality can be done away with only by establishing a new society, where men and women will enjoy equal rights, resulting from an upheaval in the means of production and in all social relations. Thus, the status of women will improve only with the elimination of the system that exploits them.”

“The revolution and women’s liberation go together. We do not talk of women’s emancipation as an act of charity or because of a surge of human compassion. It is a basic necessity for the triumph of the revolution. Women hold up the other half of the sky.”

“We must dare to invent the future.”

“The spirit is smothered, as it were, by ignorance, but so soon as ignorance is destroyed, spirit shine forth, like the sun when released from clouds.”

“Debt is a cleverly managed reconquest of Africa. It is a reconquest that turns each one of us into a financial slave.”