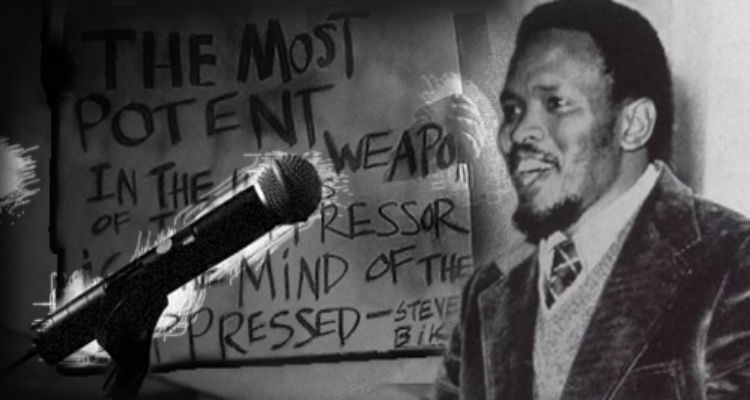 Stephen (Steve) Bantu Biko was an anti-apartheid activist in South Africa, between the mid-1960s and his death in police detention in 1977. Biko was the co-founder of the South African Students’ Organization, subsequently spearheading the nation’s Black Consciousness Movement. He also co-founded the Black People’s Convention in 1972. Biko was arrested many times for his anti-apartheid work and, on September 12, 1977, died from injuries that he sustained while in police custody. Though Biko was killed before his thirty-first birthday, his influence on South Africa was and continues to be profound.

Here are 10 quotes by Steve Biko:

2. “Merely by describing yourself as black you have started on a road towards emancipation, you have committed yourself to fight against all forces that seek to use your blackness as a stamp that marks you out as a subservient being.”

7. “Instead of involving themselves in an all-out attempt to stamp out racism from their whyte society, liberals waste a lot of time trying to prove to as many blacks as they can find that they are liberal… A game at which the liberals have become masters is that of deliberate evasiveness. The question often comes up ‘what can you do?’. If you ask him to do something like stopping to use segregated facilities or dropping out of varsity to work at menial jobs like all blacks or defying and denouncing all provisions that make him privileged, you always get the answer – ‘but that’s unrealistic!’ While this may be true, it only serves to illustrate the fact that mo matter what a whyte man does, the colour of his skin – his passport to privilege- will always put him miles ahead of the black men. Thus in the ultimate analysis, no whyte person can escape being part of the oppressor camp.”

8. “I would like to remind the black ministry, and indeed all black people, that God is not in the habit of coming down from heaven to solve people’s problems on earth.”

9. “Black Consciousness is an attitude of the mind and a way of life, the most positive call to emanate from the black world for a long time. Its essence is the realisation by the black man of the need to rally together with his brothers around the cause of their oppression – the blackness of their skin – and to operate as a group to rid themselves of the shackles that bind them to perpetual servitude… The basic tenet of black consciousness is that the black man must reject all value systems that seek to make him a foreigner in the country of his birth and reduce his basic human dignity.”