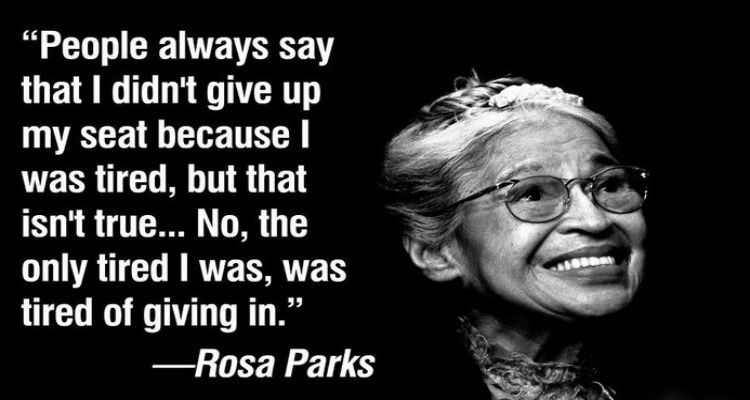 Rosa Parks is known as “The First Lady of Civil Rights” and ” The Mother of the Freedom Movement”.  Although four other Black women actually preceded Parks in their refusal to give up their seats on a bus, it was Parks’ refusal and arrest, which sparked the Montgomery bus boycott that initiated the American civil rights movement. Rosa Parks received many accolades during her lifetime, including the Spingarn Medal, the NAACP’s highest award,  and the prestigious Martin Luther King Jr. Award. In 1996, President Bill Clinton awarded her the Presidential Medal of Freedom, and the following year, she was awarded the Congressional Gold Medal. In 1999, TIME magazine named Rosa Parks on its list of “The 20 most influential People of the 20th Century.”

Here are ten memorable quotes by Rosa Parks; the woman, who stood up for something while remaining seated:

“You must never be fearful about what you are doing when it is right.”

“I have learned over the years that when one’s mind is made up, this diminishes fear; knowing what must be done does away with fear.”

“There is just so much hurt, disappointment, and oppression one can take… The line between reason and madness grows thinner.”

“Each person must live their life as a model for others.”

“Differences of race, nationality, or religion should not be used to deny any human being citizenship rights or privileges. Life is to be lived to its fullest so that death is just another chapter. Memories of our lives, of our works and our deeds, will continue in others.”

“I would like to be remembered as a person who wanted to be free… so other people would be also free.”

“Racism is still with us. But it is up to us to prepare our children for what they have to meet, and, hopefully, we shall overcome.”

“I believe we are here on the planet Earth to live, grow up and do what we can to make this world a better place for all people to enjoy freedom.”

“I would like to be known as a person who is concerned about freedom and equality and justice and prosperity for all people.”

“I don’t think well of people who are prejudiced against people because of race. The only way for prejudiced people to change is for them to decide for themselves that all human beings should be treated fairly. We can’t force them to think that way.”