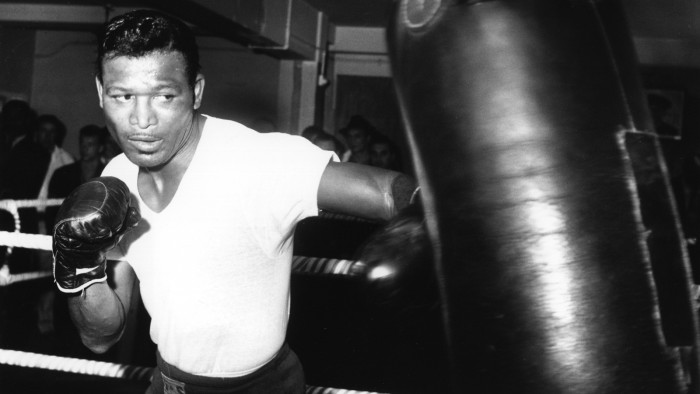 Sugar Ray Robinson is considered one of the greatest boxers of all time. Robinson held the world welterweight title from 1946 to 1951, and by 1958, he had become the first boxer to win a divisional world championship five times.

Born Walker Smith, Jr., in Detroit, Michigan on May 3, 1921, Robinson became interested in boxing as a teenager, when he moved to New York City with his parents. But New York proved rough. With little money—Robinson helped his mother save for an apartment by earning change dancing for strangers in Times Square—the Smiths built their new life in a section of Harlem dominated by flophouses and gangsters. 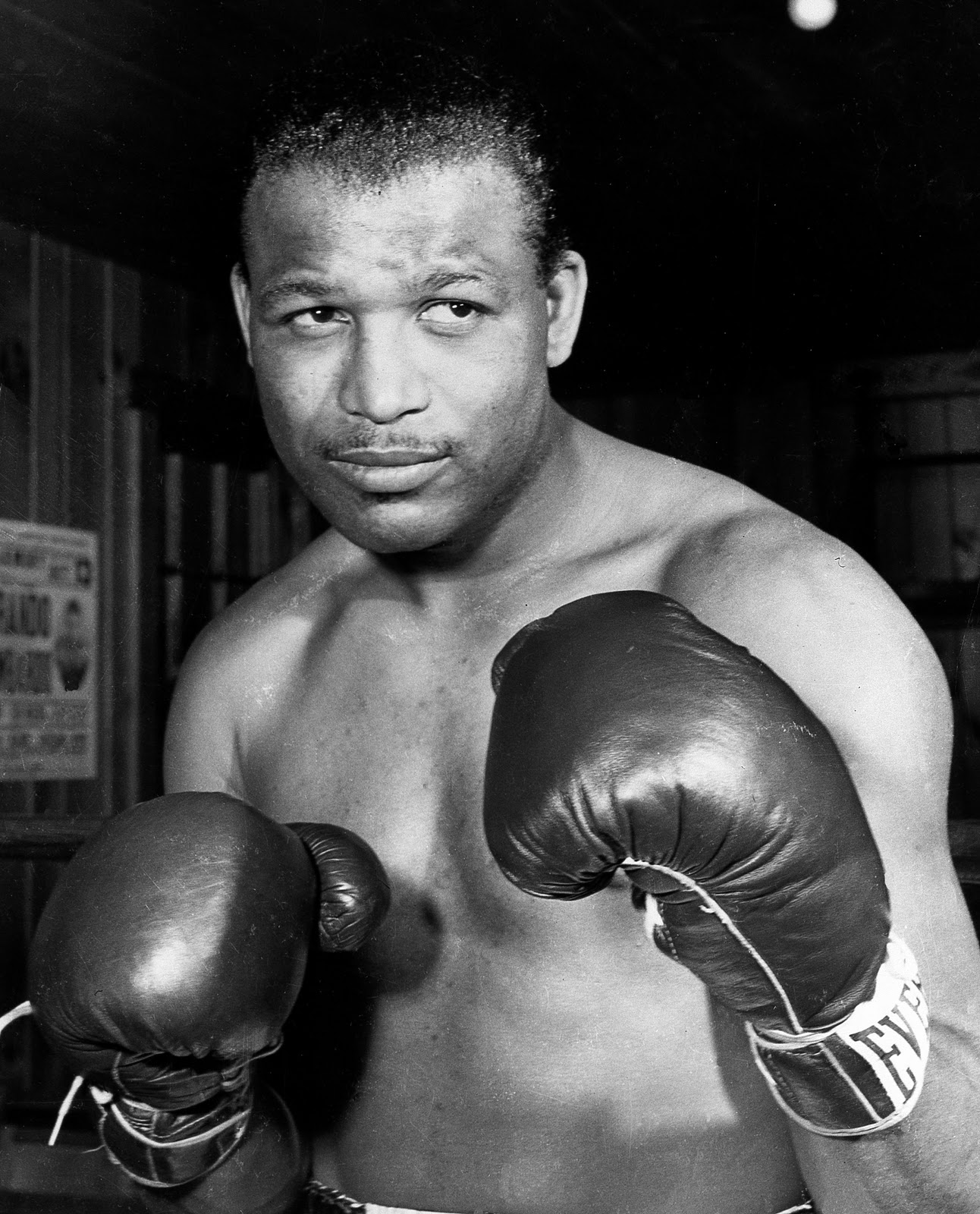 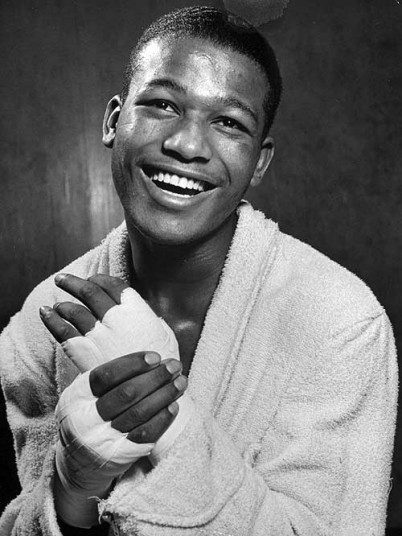 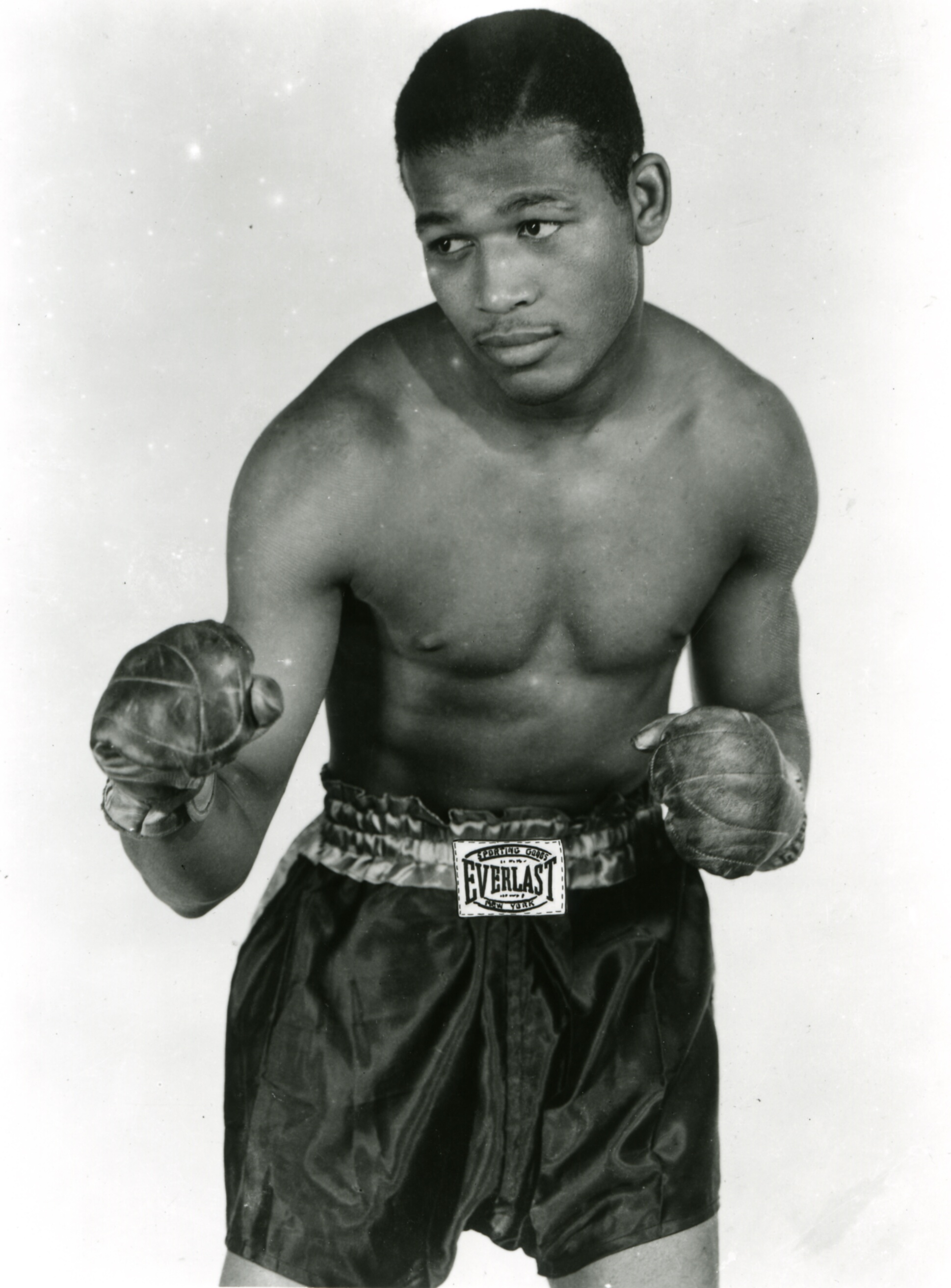 Fearful that her son would get pulled into this shady world, Robinson’s mother turned to the Salem Methodist Episcopal Church, where a man by the name of George Gainford had just started a boxing club.

It didn’t take much for Robinson, who’d been a neighbor of heavyweight champ Joe Louis back in Detroit, to strap on fighting gloves. For the first bout of his career in 1936, he borrowed the Amateur Athletic Union card of another boxer, whose name was Ray Robinson, to enter the ring. Robinson wouldn’t go by his birth name for the rest of his career.

According to Ron Borges in HBO World Championship Boxing sportswriter Jack Case, who saw a young Robinson fight at the Salem Crescent Gym in New York in 1939, told Robinson’s manager, George Gainford, “That’s a sweet fighter you’ve got there.” “Sweet as sugar,” answered Gainford. The nickname “Sugar Ray,” like manager Gainford, would be with Robinson for the rest of his career.

Robinson became a professional boxer in 1940. His first fight, against Joe Echevarria, ended with Robinson’s victory in the second round.

Robinson served in the U.S. Army during World War II, but his major battles during that time were with a boxing rival named Jake LaMotta. Robinson had been unbeaten in his first 40 fights. The 41st was against LaMotta. Robinson had easily beaten LaMotta in a 10-round match in New York City, but at a rematch in Detroit, LaMotta won. This was the first defeat of his career. Three weeks later, Robinson avenged himself by beating LaMotta again. This would be a pattern that repeated itself throughout his career; when another boxer beat him (and it happened rarely), Robinson came back in a rematch and pounded the other boxer into defeat.

“That was the thing about Robinson,” boxing trainer and historian Teddy Atlas told writer Borges. “He not only won his rematches, he stopped the guy.… He was magnificent after a loss. … He corrected his mistakes and took his opponent apart if they fought again.” Atlas also told Borges, “If I had a guy who beat Ray Robinson I’d be sure to do one thing. Don’t give him a rematch. Ray had more than talent. He had genius.”

Robinson won 40 consecutive professional fights before losing to Jake LaMotta in one of their six battles. On Dec. 20, 1946, he won the welterweight championship by defeating Tommy Bell on a 15-round decision. Robinson resigned this title on winning the middleweight championship by a 13-round knockout of LaMotta on Feb. 14, 1951. He lost the 160-pound title to Randy Turpin of England in 1951 and regained it from Turpin later that year. In 1952 he narrowly missed defeating Joey Maxim for the light-heavyweight (175-pound) crown and a few months later retired.

After his loss to Maxim the next year, Robinson spent 22 months in show business as a tap dancer before regaining the middleweight title with a second-round knockout of Carl (Bobo) Olson in the seventh bout of his comeback, on Dec. 9, 1955.

Robinson was dethroned in 1957 by Gene Fullmer, but four months later he won the title for the fourth time, knocking out Fullmer in the fifth round with what boxing historians called a perfect left hook.

Robinson was married three times. His first marriage, when Robinson was still a teenager, produced one son, Ronnie Smith. The marriage was later annulled. He then married Edna Mae Holly and they had one son, Ray Jr., in 1949. Robinson married Millie Bruce in 1965, and the two would remain together for the rest of his life. They lived in Los Angeles, where Ray established the Sugar Ray Robinson Youth Foundation, an organization that funded and organized recreational activities for young people. Ray continued to work out until the mid 1970s, when his age began to take its toll.

In the 1980s, as Alzheimer’s Disease, a common malady among boxers with long careers, took hold of Robinson, Millie’s side of the family took control of the youth foundation. Robinson died on April 12, 1989.