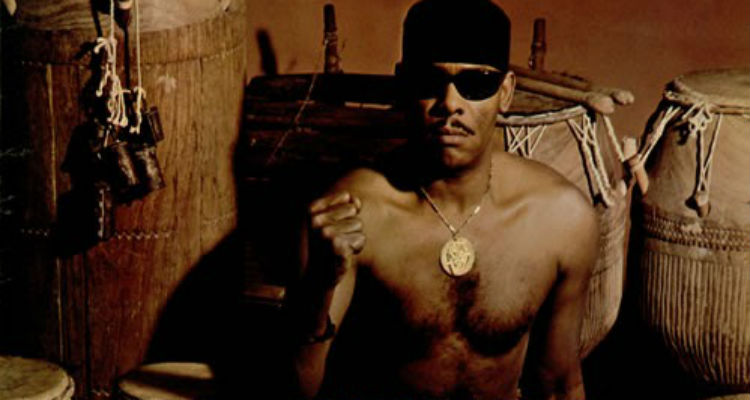 “The reuniting of African-American jazz with its African roots.”

Kofi Ghanaba, also known as Guy Warren, was one of the most influential Ghanaian musicians of the mid-20th century. By adding Ghanaian percussion instruments to American jazz music, Ghanaba integrated African and American musical sounds to create the genre Afro-jazz. Ghanaba’s virtuosity on the African drums earned him the appellation The Divine Drummer. His first album, released in 1956, was called Africa Speaks, America Answers. He was a key inspiration for the Nigerian Afrobeat innovator Fela Kuti.

Ghanaba was born Warren Gamaliel Kpakpo Akwei in Accra in the then Gold Coast (now Ghana) on 4 May 1923 to Richard Mabuo Akwei, and Susana Awula Abla Moore. Named by his parents after Warren G. Harding, the 29th president of the United States, in 1943 he changed his name to Guy Warren. However, in celebration of his roots and culture he took the name Kofi Ghanaba on 1 July 1974, Ghana’s Republic Day.

Ghanaba’s mother was a great beauty of her time, and his father was founder and first headmaster of Ghana National School, Accra. As a youngster Ghanaba was a boisterous free spirit who found little peace and comfort with the strict establishmentarian demeanour of his father. Richard Akwei, a disciplinarian of the middle-class gentry of Accra, was a renowned educationist and founder of the Akwei Memorial School in central Accra; also a sports administrator, he is credited with being the first Ghanaian Chief Executive of what was then the Central Organization of Sports (COS), now referred to as the Sports Council.

Ghanaba was just seven when he was taught the Charleston by seamen visiting the Gold Coast. A decade later, in Accra, he was given a gramophone by a British army captain. With it came a disc of the US clarinettist Artie Shaw’s Non-Stop Flight. Ghanaba embarked on his lifelong love affair with American music. He was educated at the Government Boys’ School, Accra, from 1928 to 1939. During this time, he developed his interest in music by playing for the school band. After passing with distinction from the Government Boys’ School, he enrolled as a student/founder at Ordorgonno Secondary School in 1940. That same year, he joined the Accra Rhythmic Orchestra under Yeboah Mensah as a drummer. He won a scholarship to the prestigious Achimota college, where he learned music theory. He taught himself to dance and act in pantomime and variety shows, written by himself. In 1943, he dropped out of teacher-training because, as he later said, “I was bored stiff with my studies and the stern discipline of the college, which attempted to change me into an Englishman.” Ghanaba made his way, probably as a seaman, to New York via south America. In Greenwich Village, he worked with the trombonist and jazz veteran Miff Mole. He was forced to return to Accra soon afterwards but with a quartet that included the saxophonist Joe Kelly, he sowed the seeds of a modern music scene, playing for allied servicemen.

In 1943, he was recruited by American military intelligence, travelling briefly to Chicago where he encountered a thriving jazz scene. He returned to Accra in the same year and joined the Spectator Daily as a reporter under the editor Robert Wuta-Ofei. In addition Akwei held various journalistic positions, including editor of the Daily Echo, Gold Coast Independent and Star of West Africa, between 1950 and 1952. In 1944 he began broadcasting jazz programmes while working at the Gold Coast Broadcasting Service under the name Guy Warren, which he continued using for the next three decades.

Postwar, he and Kelly formed the original Tempos Band, joined subsequently by the trumpeter ET Mensah, who re-formed the band under his own name. The Tempos were considered the greatest jazz band in Africa. This career path was interrupted when he was invited to London to play “bongos” with Kenny Graham’s Afro-Cubists. He also played with an all-Ghanaian band known as the Afro-Cuban Eight. He returned home with new influences, including calypso, which became an important ingredient in the emerging dance band highlife. In 1951 Warren quit The Tempos, leaving it under the leadership of trumpeter/saxophonist E.T. Mensah, and moved to Liberia where he worked as a journalist and radio presenter, becoming the first African to present a programme on the BBC World Service.

However, Ghanaba was keen to introduce African drums into jazz and after developing his own drum technique, he made his way back to Chicago. In 1955 he met the champion of bebop, saxophonist Charlie Parker, who invited him to play talking drum at an all-star concert in New York. But Parker died shortly after their meeting and that gig never happened. One of the final pictures ever taken of Parker showed him robed in Ghanaian kente cloth alongside Warren who was wearing the saxophonist’s overcoat. Ghanaba got to know many great figures of jazz. He rehearsed with John Coltrane and Thelonius Monk but he recalls they could not handle the complications of his playing style and he refused to adapt to their requirements, although Monk remained a friend. He played briefly with Lester Young and the Sarah Vaughan Trio in the Birdland All-Stars and he was invited to join the band of pianist Erroll Garner, but by then he was concentrating on recording his first solo record.

His 1956 LP Africa Speaks, America Answers, recorded with Gene Esposito and Red Saunders, blended African, American and European elements into a genuinely multicultural ‘fusion’ music. The album sold more one million copies worldwide since its release. The master drummer Max Roach later remarked: “Ghanaba was so far ahead of what we were all doing, that none of us understood what he was saying – that in order for African-American music to be stronger, it must cross-fertilize with its African origins. . . we ignored him. Seventeen years later the African sound of Ghanaba is now being imitated all over the United States.” The album confirmed his reputation as the musician who established the African presence in jazz. African music was popular, but it had not been integrated with world music until Warren fused them together. Later musicians, such as Fela Kuti and Osibisa, succeeded in popularising Ghanaba’s innovative fusion of music.

He followed this with a string of groundbreaking (though now unavailable) albums for Colombia, Decca and EMI, such as Themes For African Drums (1958) and Emergent Drums (1963). However, by the mid-1960s, tiring of the racism and critical response he had experienced in the US, he returned to Accra. Once there, he published his autobiography I Have a Story to Tell, and his music returned to traditional African roots, as the 1969/70 recording The Divine Drummer demonstrates. Ghanaba described his performance on the drums as love-making, seeing the African drums as a woman who could not be satisfied. “Is that all?” is what the drums seemed to ask after a hefty performance, to which he would respond: “I will be back for another session.”

By the end of the 1960s Ghanaba embraced Buddhism and began to experiment with new forms of music, which sometimes confounded Ghanaian critics. As ever, he was way ahead of his time.

During the 1970s, he changed his stage name to Kofi Ghanaba (“son of Ghana”) In the 1990s, he played a role in the film Sankofa (1993), written and directed by Haile Gerima, who was working in the United States. In 2001, at the age 78, he returned to the international limelight in the musical Yaa Asantewaa: Warrior Queen, alongside the Pan African Orchestra and the UK-based dance company Adzido. Ghanaba continued to make music until his death on 22 December 2008.

Ghanaba was married twice and had six children. His first son, Guy Warren Jr aka “Odinga Oginga”, is an artist specialising in sculpting, painting and carving, who currently lives in New York City. His second child Glenn Gillespie Warren, also called “Ghanababa” (the son of Ghanaba), is a jazz drummer who featured on the album That Happy Feeling (Safari, 1979). He recorded Bomdigi (Safari, 2008), the last album featuring Ghanaba. Glenn was chosen by Ghanaba himself to carry on his work, which was formally marked when Ghanaba handed Glenn his drumsticks.[ Ghanaba’s third son, Gamal Abdel Nasser Warren, aka The President, is a political science student who was named after president Nasser of Egypt, with the permission and blessing of the great man himself given in a letter written to Ghanaba. His fourth son Gamaliel Joseph Warren, who also inherited his father’s musical talent as a jazz drummer, is currently based in Gary, Indiana.

In 1976, Ghanaba met and married Mrs Felicia Ghanaba, a Togolese living in Ghana. She bore Ghanaba a much longed for daughter whom they named Medie (“mine”); now married, she is known as Medie Ghanaba Lemay. In 1982 the couple had a second daughter named Gye Nyame Hosanna Ghanaba. At home, Ghanaba was a kind husband and loving father, a responsible man who took great care of his family.