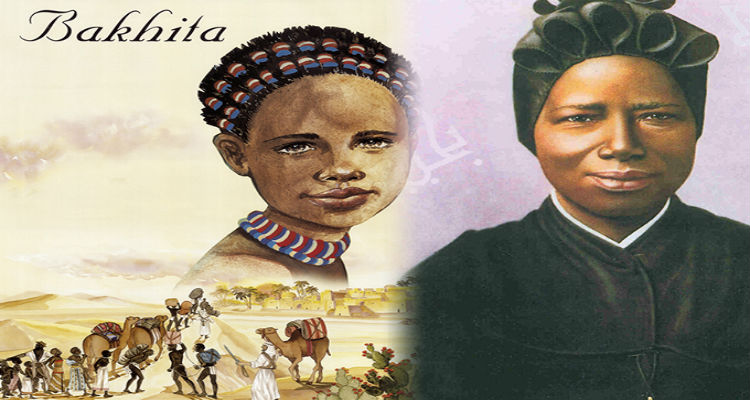 St. Josephine Bakhita was a Sudanese-born woman who was enslaved before becoming a Canossian Religious Sister in Italy, living and working there for 45 years. In 2000 she was declared a saint by the Catholic Church.

St. Josephine Bakhita was born to a locally important family in Sudan in 1869. She belonged to the prestigious Daju people; her well respected and reasonably prosperous father was brother of the village ruler. She was surrounded by a loving family of three brothers and three sisters; as she says in her autobiography: “I lived a very happy and carefree life, without knowing suffering.”

At the age of seven she was kidnapped by Arab slave traders. Over the course of the next eight years she was sold and resold five times in the markets of El Obeid and Khartoum.

Bakhita was not the name she received from her parents at birth. The fright and the terrible experience she went through made her forget the name her parents gave her. Bakhita, which means “fortunate”, was the name given to her by her kidnappers. She suffered much brutality during her bondage. On one occasion, one of her enslaver’s sons beat her so severely that she spent a month unable to move from a straw bed. Her fourth enslaver used a razor and salt to create scar patterns into her skin. She had more than 114 patterns on her breasts, belly and arms. She was also forcibly converted to Islam.

In the Sudanese capital, St. Josephine was bought by an Italian consul, Callisto Legnani. Two years later, when Legnani himself had to return to Italy, Bakhita asked to go with him and a friend of his, a certain Mr. Augusto Michieli. On their arrival in Genoa, Mr. Legnani, at the request of Mr. Michieli’s wife, agreed to leave Bakhita with them. She followed the new “family”, which settled in Zianigo, west of Venice. She lived there for three years and became nanny to the Michieli’s daughter Alice, known as Mimmina.

The acquisition and management of a large hotel in Suakin on the Red Sea forced Mrs. Michieli to move to Suakin to help her husband. Meanwhile, on the advice of their administrator, Mimmina and Bhakita were entrusted to the Canossian Sisters of the Institute of Catechumens in Venice. It was there that that Bakhita came to know about the Christian God,

“Seeing the sun, the moon and the stars, I said to myself: who could be the Master of these beautiful things? And I felt a great desire to see him, to know him and to pay him homage…”

Several months later, Bakhita received the sacraments of Christian initiation and was given a new name, Josephine. It was 9 January 1890. When Mrs. Michieli returned from Africa to take her daughter and Bakhita, the latter, with unusual firmness and courage, expressed her desire to remain with the Canosian Sisters.

In 1902 she was assigned to the Canossian convent at Schio, in the northern Italian province of Vicenza, where she spent the rest of her life. During her 42 years in Schio, Bakhita was employed as the cook, sacristan and portress (door keeper) and was in frequent contact with the local community. Her gentleness, calming voice, and ever-present smile became well known and Vicenzans still refer to her as Sor Moretta (“little brown sister”) or Madre Moretta (“Black mother”). Her special charisma and reputation for sanctity were noticed by her order; the first publication of her story (Storia Meravigliosa by Ida Zanolini) in 1931, made her famous throughout Italy.

Bakhita died at 8:10 PM on 8 February 1947. For three days her body lay on display while thousands of people arrived to pay their respects.

On 1 December 1978, Pope John Paul II declared Josephine Venerabilis, the first step towards canonization. On 17 May 1992, she was declared Blessed and given February 8 as her feast day. On 1 October 2000, she was canonized and became Saint Josephine Bakhita. She is venerated as a modern African saint, and as a statement against the brutal history of slavery. She has been adopted as the only patron saint of Sudan.