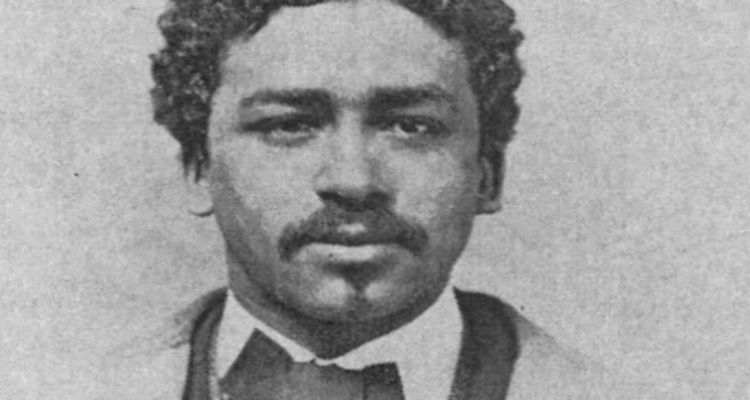 Richard Theodore Greener, the African-American educator, lawyer, consular officer and reformer was the first Black graduate of Harvard University and dean of the Howard University School of Law.

Richard Greener was born in Philadelphia on January 30, 1844 and moved with his mother to Boston when he was approximately nine years old. He attended the Broadway Grammar School in Cambridge, Massachusetts until he was fourteen, then dropped out of school to help support his family, working as a porter, clerk and night-watchman in an assortment of jobs. With help from two of his employers, August E. Batchelder and George Herbert Palmer, Greener attended preparatory school at Oberlin College from 1862 to 1864 and Phillips Academy at Andover from 1864 to 1865. Batchelder arranged for Greener’s admission to Harvard in 1865 as an experiment in the education of African-Americans. In 1870 Greener graduated from Harvard with honors, the first African-American to do so. He won two Bowdoin prizes as an undergraduate.

On September 24, 1874, Greener married Genevieve Ida Fleet, and they had six children. One of his daughters was Belle da Costa Greene, a prominent librarian. Greener separated from his wife, although they never divorced. She and her daughters changed their name to “Greene” to disassociate themselves from him. Belle, personal librarian to J. P. Morgan, passed for whyte.

After teaching for two years at the Institute for Colored Youth in Philadelphia and then serving as principal at the Preparatory School for Colored Children in Washington, D.C., Greener accepted the professorship of metaphysics at the University of South Carolina in October 1873. In addition to his primary teaching duties, he assisted in the departments of Latin, Greek, mathematics, and constitutional history. He was also acting librarian, arranging the university’s book collection of 27,000 volumes, and beginning preparation of a catalog. During this same time, Greener was able to study law at the University, winning his law degree in 1876 and admission to the bar of the District of Columbia two years later. He remained at South Carolina until March 1877, when the Wade Hampton legislature abruptly closed the door of the university to Black students.

Before long, Greener became dean of the department of law at Howard University, and developed a considerable reputation as a speaker and writer. He knew African-American leaders of the era like Booker T. Washington and Frederick Douglass. Professor Henry Louis Gates Jr. has described Greener as “a leading intellectual of the time.”

Greener went on to work in government jobs in Washington and had numerous contacts with President Ulysses S. Grant. He was active in Republican politics and in 1885 was appointed secretary of the Grant Memorial Association in New York State. In the late 1880s he turned to literary work and served as associate editor of the National Encyclopedia of American Biography. In one 1894 essay, he reframed the “Negro Problem” as “The White Problem.”

In 1898, President McKinley appointed him U.S. commercial agent at Vladivostok in Siberia. Greener left his American family and took a Japanese common-law wife, with whom he had three children.

Greener left the foreign service in 1905, settling in Chicago with relatives. He held a job as an agent for an insurance company and practiced law. He occasionally lectured on his life and times for the remainder of his life. Richard Theodore Greener died in Chicago on May 2, 1922.

Along with having accomplished many African-American firsts, Greener earned several awards in his lifetime. In 1902, the Chinese government decorated him with the Order of the Double Dragon for his service to the Boxer War and assistance to Shansi famine sufferers. While at Harvard in 1868 and 1870 he earned the Bowdoin Prize for elocution.

He received two honorary Doctorates of Laws, one from Monrovia College in Liberia in 1882, and the other from Howard University in 1907. In addition, several institutes have scholarships in his name. Phillips Academy has the Richard T. Greener 1865 Endowed Scholarship, a full-tuition scholarship awarded to one Andover student annually for his or her four-year tuition. The University of South Carolina’s Black Alumni Council sponsors the Richard T. Greener Endowment Fund, which provides $8,000 to six USC students for their four-year tuition.

Greener’s Harvard diploma and other personal papers were rediscovered in the attic of an abandoned home in 2009, by a member of a demolition crew.