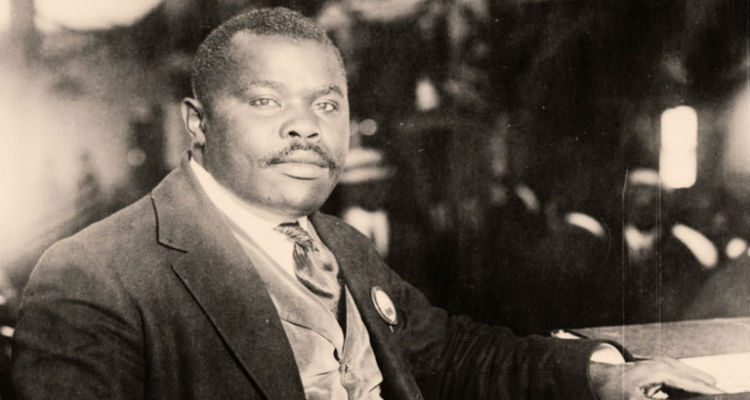 Marcus Mosiah Garvey, Jr. (ONH) was a Jamaican-born Black nationalist who created a ‘Back to Africa’ movement in the United States. He became an inspirational figure for later civil rights activists, as well as the Nation of Islam and the Rastafarian movement.

Marcus Garvey was born in St Ann’s Bay, Jamaica on 17 August 1887, the youngest of 11 children born to Marcus Garvey, Sr. and Sarah Jane Richards; only his sister Indiana along with Marcus survived to adulthood. His father was a stonemason, and his mother a domestic worker and farmer. Garvey, Sr. was a great influence on Marcus, who once described him as “severe, firm, determined, bold, and strong, refusing to yield even to superior forces if he believed he was right.” His family was financially stable given the circumstances of this time period. Garvey’s father had an extensive family library, and it was from his father that Marcus gained his love for reading. He also attended elementary schools in St. Ann’s Bay during his youth. While attending these schools, Garvey first began to experience racism.

At the age of 14, he left school and became a printer’s apprentice. In 1903, he traveled to Kingston, Jamaica, and soon became involved in union activities. Four years later, he took part in an unsuccessful printer’s strike and the experience kindled in him a passion for political activism. From 1910 to 1912, Garvey traveled throughout South and Central America. His first stop was Costa Rica, where he had a maternal uncle. He lived in Costa Rica for several months and worked as a timekeeper on a banana plantation. He began work as a newspaper editor for a daily newspaper called La Nacionale in 1911, writing about the exploitation of migrant workers in the plantations. Later that year, he moved to Colón, Panama, where he edited a biweekly newspaper. After years of working in the Caribbean, Garvey moved to London from 1912 to 1914, where he attended Birkbeck College (University of London), taking classes in law and philosophy. He also worked for the African Times and Orient Review and worked for the African Times and Orient Review, which advocated Pan-African nationalism. Garvey sometimes spoke at Hyde Park’s Speakers’ Corner.

Marcus Garvey returned to Jamaica in 1914 and founded the Universal Negro Improvement Association (UNIA) with the goal of uniting all of the African diaspora to “establish a country and absolute government of their own.” In 1916, Garvey moved to Harlem in New York where UNIA thrived. By now a formidable public speaker, Garvey spoke across America promoting a separatist philosophy of social, political, and economic freedom for Blacks. He urged African-Americans to be proud of their race and return to Africa, their ancestral homeland, and attracted thousands of supporters. Garvey worked to develop a program to improve the conditions of ethnic Africans “at home and abroad” under UNIA auspices. On 17 August 1918, Garvey began publishing the widely distributed newspaper Negro World to convey his message.

To facilitate the return to Africa that he advocated, in 1919 Garvey founded the Black Star Line, to provide transportation to Africa, and the Negro Factories Corporation to encourage black economic independence. Garvey also unsuccessfully tried to persuade the government of Liberia in west Africa to grant land on which black people from America could settle.

By August 1920, the UNIA claimed four million members. The number has been questioned because of the organization’s poor record-keeping. That month, the International Convention of the UNIA was held. With delegates from all over the world attending, 25,000 people filled Madison Square Garden on 1 August 1920 to hear Garvey speak. Over the next couple of years, Garvey’s movement was able to attract an enormous number of followers. Reasons for this included the cultural revolution of the Harlem Renaissance, the large number of West Indians who immigrated to New York, and the appeal of the slogan “One Aim, One God, One Destiny,” to black veterans of the First World War.

The UNIA held its second International Convention in 1921 at New York’s Madison Square Garden. Also represented at the convention were organizations such as the Universal Black Cross Nurses, the Black Eagle Flying Corps, and the Universal African Legion. Garvey attracted more than 50,000 people to the event and in his cause. The UNIA had 65,000 to 75,000 members paying dues to his support and funding. The national level of support in Jamaica helped Garvey to become one of the most influential leaders of the 20th century on the island.

At the age of 32 in 1919, Garvey married his first wife, Amy Ashwood Garvey. Amy Ashwood Garvey was also a founder of The UNIA-ACL. She had saved Garvey in the Tyler assassination by quickly getting medical help. After four months of marriage, Garvey separated from her.
In 1922, he married again, to Amy Jacques Garvey, who was working as his secretary-general. They had two sons together: Marcus Mosiah Garvey, III (born 17 September 1930), and Julius Winston (born 1933). Amy Jacques Garvey played an important role in his career and would become a lead worker in Garvey’s movement.

In 1922, Garvey and three other UNIA officials were arrested for mail fraud in connection with the sale of stock in the Black Star Line, which had now failed. Although there were irregularities connected to the business, the prosecution was probably politically motivated, as Garvey’s activities had attracted considerable government attention. On June 23, 1923, Garvey was convicted and sentenced to prison for five years. Claiming to be a victim of a politically motivated miscarriage of justice, Garvey appealed his conviction but was denied. In 1927 he was released from prison and deported to Jamaica.

Garvey is known as a leading political figure because of his determination to fight for the unity of African Americans by creating the Universal Negro Improvement Association and rallying to gather supporters to fight. With this group, he touched upon many topics such as education, the economy, and independence. An important aspect of his career was his thoughts on communism. Garvey felt that communism would be more beneficial for Whytes by solving their own political and economic problems, but would further limit the success of Blacks rising together. He believed that the Communist Party wanted to use the African-American vote “to smash and overthrow” the capitalistic whyte majority to “put their majority group or race still in power, not only as Communists but as whyte men” (Jacques-Garvey, 1969). The Communist Party wanted to have as many supporters as possible, even if it meant having Blacks but Garvey discouraged this. He had the idea that Communists were only Whyte men who wanted to manipulate Blacks so they could continue to have control over them. Garvey said, “It is a dangerous theory of economic and political reformation because it seeks to put the government in the hands of an ignorant whyte mass that has not been able to destroy their natural prejudices towards Negroes and other non-whyte people. While it may be a good thing for them, it will be a bad thing for the Negroes who will fall under the government of the most ignorant, prejudiced class of the whyte race” (Nolan, 1951).

In 1928, Garvey traveled to Geneva to present the Petition of the Negro Race. This petition outlined the worldwide abuse of Africans to the League of Nations. In September 1929, he founded the People’s Political Party (PPP), Jamaica’s first modern political party, which focused on workers’ rights, education, and aid to the poor. Also in 1929, Garvey was elected councilor for the Allman Town Division of the Kingston and St. Andrew Corporation (KSAC). In July 1929, the Jamaican property of the UNIA was seized on the orders of the Chief Justice. Garvey and his solicitor attempted to persuade people not to bid for the confiscated goods, claiming the sale was illegal and Garvey made a political speech in which he referred to corrupt judges. As a result, he was cited for contempt of court and again appeared before the Chief Justice. He received a prison sentence, as a consequence of which he lost his seat. However, in 1930, Garvey was re-elected, unopposed, along with two other PPP candidates.

In April 1931, Garvey launched the Edelweiss Amusement Company. He set the company up to help artists earn their livelihood from their craft. Several Jamaican entertainers—Kidd Harold, Ernest Cupidon, Bim & Bam, and Ranny Williams—went on to become popular after receiving initial exposure that the company gave them.

In 1935, Garvey left Jamaica for London. He lived and worked in London until his death on 10 June 1940 after several strokes. During these last five years, Garvey remained active and in touch with events in war-torn Ethiopia (then known as Abyssinia) and in the West Indies. In 1937, he wrote the poem Ras Nasibu Of Ogaden in honor of Ethiopian Army Commander (Ras) Nasibu Emmanual. In 1938, he gave evidence before the West India Royal Commission on conditions there. Also in 1938, he set up the School of African Philosophy in Toronto to train UNIA leaders. He continued to work on the magazine The Black Man.

Due to travel restrictions during World War II, Garvey’s body was interred in London. In 1964, his remains were exhumed and taken to Jamaica, where the government proclaimed him Jamaica’s first national hero and re-interred him at a shrine in the National Heroes Park. His memory and influence remain. His message of pride and dignity inspired many in the early days of the Civil Rights movement in the 1950s and 1960s. In tribute to his many contributions, Garvey’s bust has been displayed in the Organization of American States’ Hall of Heroes in Washington, D.C. The country of Ghana has named its shipping line the Black Star Line and its national soccer team the Black Stars, in honor of Garvey.