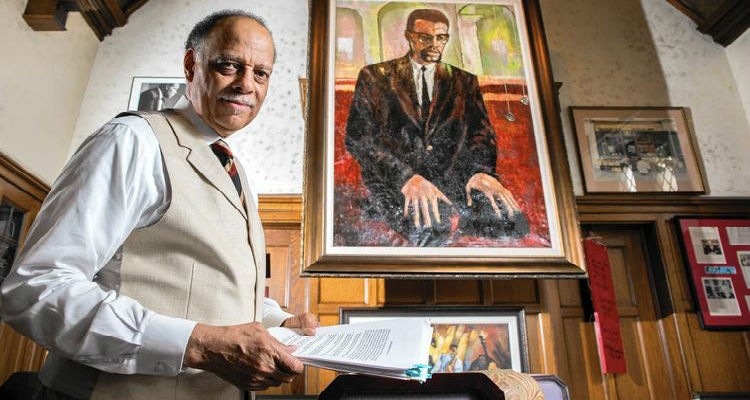 In 1990, Dr Haki R. Madhubuti begins his book, Black Men: Obsolete, Single, Dangerous?, with the statement, “The pain is in the eyes. Young Black men in their late twenties or early thirties living in urban America, lost and abandoned, aimlessly walking and hawking the streets with nothing behind their eyes but anger, confusion, disappointment and pain. These men, running the streets, occupying corners, often are beaten beyond recognition, with scars both visible and internal. These men, Black men — sons of Afrika, once strong and full of hope that America lied about — are now knee-less, voice-broken, homeless, forgotten and terrorized into becoming beggars, thieves or ultra-dependents on a system that considers them less than human and treats them with less dignity and respect than dead dogs. I am among these men. I will never forgive [whyte] people for what they have done to Afrikan-American men, women and children…”

I grew up in Kingston, Jamaica. Not the USA. Yet, I knew these young Black men, Dr Madhubuti wrote about. I had grown up in a rough ghetto and had seen death all around me. I would also see the same anger, confusion, disappointment and pain in young Black British men, when I moved to London. I came to understand that anywhere in the West, Black men, women and children were victims of whyte supremacy/domination. Black Men: Obsolete, Single, Dangerous? makes this very clear.

Here are Ten Quotes from this profound, must-read book:

Afrikan American men…
stand tall and dare to be great
dare to move beyond the limited ideas of others,
dare to think for yourselves
for the future.
dare to conceive a world where you
are more than a consumer,
a buyer…
dare to stretch your imagination to where
beauty is the norm…
dare to be beauty
dare to be creative fire,
dare to be fathers, husbands
dare to be quiet life fighters with a smile
dare.

The most prevailing consciousness among Black people today is one of survival. And this survival is not of a collective nature, in which individuals, communities and institutes work together to solve problems. Black survival, especially in the urban areas, is more Darwinian, a “survival of the fittest” attitude. Its proponents will use whatever means at their disposal to achieve their ends, regardless of the cost and pain to others…

In most Black families, members can point to at least one family member, no matter how remote, who has “made it” in America and that person(s) is constantly used as an example of what we all can do with hard work, fortitude and initiative. This implies that Black failure is always individually instituted.

A great many young Black adults are interacting on a day-to-day basis with [whyte] people either at school, work or play and find it difficult to separate the evils that the [whyte] race has perpetuated against Blacks from their newfound friendships. Somehow, the one or two [whyte] friends or mates exonerate the crimes of their people. Therefore, to many Blacks “people are just people,” and organized [whyte] death squads fall in the category of unbelievable. A historical perspective of Black/whyte confrontations is generally unknown or dismissed.

Black families should be nonviolent. Domestic violence, whatever the reason, should be outlawed. The increasing problems of battered Black women, as well as all forms of rape that often go unreported, must be addressed: a) conscious men need to help unconscious men (e.g., workshops, sports outings, clubs); b) shelters for battered women and children need to be supported’ c) help for Black men unable to control their aggression towards mates and children is needed.

Reading is a major life developing requirement… There are approximately 56,000 books published in the U.S. each year and an unbelievable number of specialized magazines, scholarly journals and monographs… The great majority of information that is freely circulated goes untouched by the Black community, either because of ignorance or non-concern.

1)Whyte men do not fear whyte women; they are concerned, yes, but fearful, no; whyte men and women are partners. 2) Whyte men do not fear Black women. The whyte men relationship to Black woman traditionally has been one of use, sexually or otherwise; the widespread of color that exists among Black people proves this point — it was whyte men raping Black women that produced the mixed-race Black person worldwide. 3) Whyte men do fear Black men. This fear may not be spoken and obvious to many Black people, but if one understands the history of whyte male/Black male relationships, it is quite evident that it is a history of war, with the horrid and severe physical and psychological enslavement and elimination of Black men by whyte men. Sterling Brown’s classic words are instructive when he says of whyte men venturing into Black communities, “they don’t come by ones, they don’t come by twos, they come by tens.”

The Black male/whyte male dynamic can be best described as one of continued and unrelenting war, with Black males being consistently on the losing end of most battles. One of the major problems is that most Black men in the United States are fighting the wrong war — that is, many are fighting to get a “piece of the pie,” therefore not understanding the “bio-social” nature of whyte males, which is that of conquest, domination and self-development, not one of sharing power or decision making with the vanquished (i.e. former slaves). The best that most Black men can hope and work for within this society is a “job” which, indeed has been defined by many disillusioned Blacks as “a piece of the pie.”

The Ethiopians have a saying, “A cat may go to a monastery, but she still remains a cat!” Afrikans brought to America are still Afrikans. Yes, we have been changed. But knowing one’s self is key to knowing and understanding others. If a person hides from self-understanding or self-knowledge, his or her life will be built upon a bed of quicksand that promises slow but certain confusion, pain, self-doubt and lonely death. All people need to take charge of their lives. The more a person understands her or his mind and body, the less she or he will destroy it. Ignorance breeds weakness and fear. One’s history and culture are as important to good life as food and water. If you don’t know who you are, you will be forever fighting other people’s war.

Very little that is worthwhile is accomplished without discipline. Discipline is a learned process; we are not born knowing it… Part of the discipline process is the ability to separate desires from needs and prioritize one’s life. In a highly material culture, it is easy to lose one’s way. The unimportant becomes important, and fruit exists as something to be eaten out of cans. Knowing when to say no and knowing one’s own limitations is critical to self-discipline.

Question: Do I think all whyte people are racist, evil, bad and corrupt?

No, but those who are, are clearly in the majority and are the ones who hold power and determine the future of my children and my neighbors’ children. The oppressed in the United States have the unusual quality of looking evil in the eye and denying its existence. This quality is not genetic, it is learned. To be part of an oppressed culture is to be hidden from knowledge, from knowing.

Wendell Berry’s The Hidden Wound confirmed for me that there are some whyte men of goodwill who are quietly and loudly talking to their own people about the “wound of racism.” However, talk is fine and books attacking racism are great, but the key to enlightenment is to interest the majority of whyte people, especially those who have power, in looking at their own history as honestly and as brutally as possible and initiating life-giving and life-saving corrections. I know that the great majority of whytes cannot and will not do this, and herein lies the problem; enlightened words are like teardrops in a desert if they are not heard.

Four recent books…confirm the validity of my position: whyte America would rather destroy itself from the inside than share power, wealth or influence with “former slaves.” The FBI’s annual “Uniform Crime Reports” clearly points out that the main criminals in the United States are whyte people. From drugs to whyte collar crimes, from homicide to organized crime, whyte men are the reigning kings. Yet, Black men are portrayed day after day on television, in newspapers, and in magazines as the chief thieves and boogiemen in the country. That’s like saying the main predator of the elephant is the mosquito.