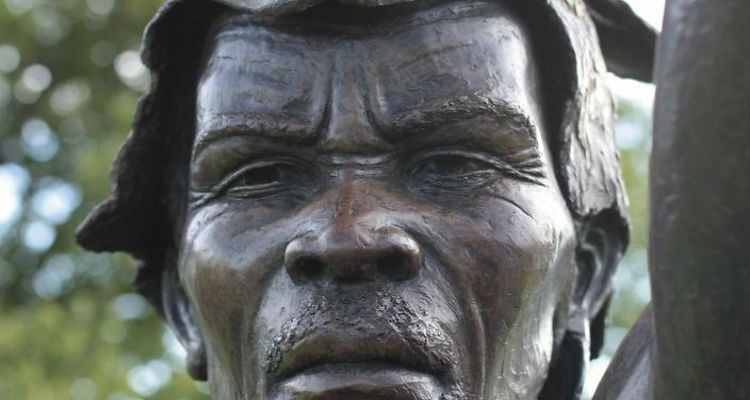 David Stuurman was a leader of the Khoi people, who fought against Dutch and the British colonialism in the Eastern Cape. Stuurman played a key role in the Khoi Rebellion, or Third Frontier War, which lasted from 1799 to 1803. He was one of the first political prisoners to be sent to Robben Island. He was arrested twice, in 1809 and in 1819. Both times he escaped. Stuurman was arrested again in 1823 and exiled to New South Wales in Australia for breaking colonial laws. He died on 22 February 1830 in the General Hospital in Sydney after travelling on a convict ship to the continent. 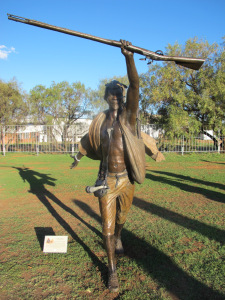 David Stuurman was born around 1773, probably near the Gamtoos River in the Eastern Cape. From the 17th century onwards, the Khoi and San people were systematically dispossessed of their traditional lands “on ordinance by the colonists”, who pressed them into service on farms. In his teens the young Stuurman went out to work on the farm of the Vermaak family where he was illtreated and beaten by Hannes Vermaak. For example, Stuurman was tied to a wagon and beaten with a sjambok. After the beating salt was rubbed into his wounds and he was left tied to the wagon in the blistering sun until his cousin untied him and helped him to escape.

In the 1790s tensions and conflict spread throughout the frontier region. Sometime around 1799, Stuurman and his family fled from Vermaak’s farm. It was alleged that he had threatened Johannes Vermaak and later the farmer died of poisoning. In 1799, the Khoi, on the eastern frontier of the Cape Colony, rebelled. Hundreds left the farms, which they were forced to work on, and went to live with the Xhosa. Together, the Khoi and the Xhosa effectively attacked the colonists. The Khoi were valuable allies as expert shooters and trained soldiers, who instructed the Xhosa in marksmanship and were relied upon for the maintenance of captured weapons. They drove many whytes from their ‘stolen’ farms and claimed a great many sheep and cattle, horses, guns and wagons.

At that time, the Dutch East India Company rule had ended. In 1795, when the British took the Cape, they had a serious problem on their hands, as the Khoi took their fight deep into the colony. The British tried to lure the Khoi back onto the stolen farms promising protection and better treatment from the Boer farmers, but the Khoi wanted their freedom.

The Khoi were weary of war and many of their leaders had been killed. The Governor General, Janssens, promised to protect the Khoi, but instructed them to return to farms and work as servants to the colonists. However, many Khoi refused to meet the Dutch and remained with the Xhosa. In fact, many from the Stuurman group did not go back to the farms but went to live at the Bethelsdorp Mission Station, near Algoa Bay. After the death of his brother Klaas, Stuurman assumed leadership of the Khoi.

However, the surrounding farmers felt threatened by the presence of the Stuurman clan and constantly complained that the Khoi, there, were in alliance with the Xhosa and were sheltering bandits, runaway servants and boosdoenders (evildoers). Eventually, after Stuurman had refused to give up two Khoi who had deserted Boer farmers, and also refused to appear before Landrost Cuyler in connection with the issue, the authorities bore down on the settlement, bound many of those into service, confiscated land and livestock, arrested Stuurman and three others and transported them to Cape Town.

Stuurman had an additional grievance over which he wrestled with the colonialists headed by Lord Caledon. This was the increasing recruitment of young Khoi men into military service. In 1808, antagonisms flared at Stuurman’s village, an outstation of Bethelsdorp, near the Gamtoos River. The landdrost (magistrate) complained that Stuurman declined to fetch his staff of office due to differences with a recruiting officer. His “crime” recorded on his return from prison was “suspicious conduct, living in a kraal near the boundaries of the colony”. Without the benefit of a trial, Stuurman was sent to Robben Island. In December 1809, Stuurman and others escaped, probably using whaling boats to reach the mainland. Most of them were recaptured, but Stuurman made his way back to the Eastern Cape.

Cuyler attempted to entice Stuurman away from the Xhosa, promising him grazing, cattle and a peaceful life near Cape Town. Stuurman refused several offers, asking that his wives and children – who were being held in Cape Town – be sent to live with him among the Xhosa.

In 1811 it was reported that Stuurman was seen participating in a cattle raiding party near the Gamtoos River. From this, it was inferred that Stuurman had a hand in other “crimes” in the area. Landdrost Stockenstrom, of Graaff-Reinet, described him as “an enemy more dangerous than the Kaffirs.” Indeed, Stuurman had become a formidable opponent and despite huge military efforts, which dislodged many Xhosas, Stuurman and his troops remained at large until 1819 when he was captured again and put to hard labour on Robben Island.

In the late 1820s, a convict named Johan Smit overpowered and disarmed a sentry on Robben Island. He freed others who gained access to the armoury. In the confusion, several soldiers were injured and one killed. Whaling boats owned by John Murray were seized and a group of about 30 prisoners made their way to the mainland in three boats. The Xhosa prophet, Makana, was in one boat, which capsized in the surf off Blouberg. Many, including Makana (Nxele), drowned. Of the prisoners 14 drowned, 12 were recaptured (including Stuurman), two killed by commandos and three escaped.

Stuurman was banished for life to the penal settlement in New South Wales, Australia. He was sent back to Robben Island for the third time and in April 1823, was transported by the convict ship, Brampton, to Australia. Among the convicts on board were Stuurman and 11 other South Africans, including another Khoi, Jantjie Piet.

His wife drew up a petition to Queen Victoria of Britain for his release, but to no avail.

After six years in compulsory government employ, Stuurman was given permission to work for wages for himself. On 22 February 1830, Stuurman died in the General Hospital in Sydney.