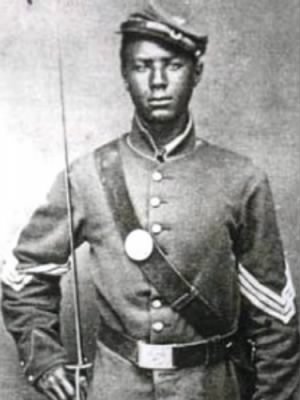 According to family history, Smith was born into the Maafa (Atlantic slavery), the son of Susan, who was enslaved, and Elijah Smith, a slave owner. Upon the outbreak of the Civil War, Elijah Smith joined the Confederate military, with the intention of taking 19-year-old Andrew along with him. When Andrew Smith learned of this, he and another enslaved Black ran away, walking 25 miles (40 km) through the rain before presenting themselves to a Union Army regiment, the 41st Illinois Infantry, in Smithland, Kentucky.

Smith became a servant to Major John Warner of the 41st Illinois. He accompanied that unit and Major Warner during the battles of Fort Donelson and Shiloh. During the Battle of Shiloh, near the Peach Orchard, the 19-year old Smith was given the responsibility of caring for Warner’s wounded horse behind the Union lines. During the fighting, Smith received a gunshot wound to the head. The bullet was removed by the regimental surgeon, leaving Smith with only a scar. After the battle, Smith accompanied Warner back to his home in Clinton, Illinois where he recovered from his wound and continued to act as a servant. In 1863, he learned that Colored Units were being raised in Massachusetts. With transportation money provided by Major Warner, Smith traveled to Boston where he joined the 55th Massachusetts Colored Infantry.

By November 30, 1864, Smith was serving as a corporal in the 55th Massachusetts Volunteer Infantry. On that day, both the 55th and the 54th Massachusetts participated in the Battle of Honey Hill in South Carolina. The two units came under heavy fire while crossing a swamp in front of an elevated Confederate position. When the 55th’s color bearer was killed, Smith took up the battle flags and carried them through the remainder of the fight. Although half of the officers and a third of the enlisted men engaged in the fight were killed or wounded, Smith continued to expose himself to enemy fire by carrying the colors throughout the battle. Through his actions, the Regimental Colors of the 55th Infantry Regiment were not lost to the enemy.

It was for this action that Smith was later awarded the Medal of Honor. Smith’s extraordinary valor in the face of deadly enemy fire is in keeping with the highest traditions of military service and reflect great credit upon him, the 55th Regiment, and the United States Army. 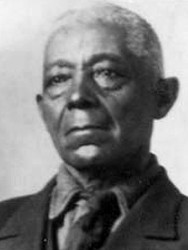 Smith was promoted to color sergeant before leaving the Army. After the war, he lived in Kentucky, where he bought and sold land. He died at age 88 and was buried in Mount Pleasant Cemetery, Grand Rivers, Kentucky.

Smith was nominated for the Medal of Honor in 1916. However, so many of the officers including its colonel had been wounded during the battle, that Smith’s brave deed was not well documented. In addition, the proposal came at a time of increasing racial prejudice as African-Americans were being denied the right to serve as combat troops in World War I.

Among the letters written to support Corporal Smith’s application was one written by Major Warner’s son to Dr. Wilder on March 10, 1917:

Dear Sir:
Mr. Andy Smith of Grand River, Kentucky, having asked me to write you what I remember in relation to a wound he received at the battle of Shiloh, I will state that for some time before that battle he had been a servant of my father, who was the Major and afterwards Lieutenant Colonel in command of the 41st Illinois Volunteer Infantry, and when the battle opened, my father told Andy to keep him in sight with a canteen of water, and if he, my father, should fall, to come to him with the water.
That sometime after my father’s regiment became engaged the horse on which he was mounted was wounded and my father was dismounted and turning found Andy standing close to him and giving the wounded horse to Andy, told him to take it to the rear and stay there.
A short time afterwards a horse from which some Confederate had been shot, galloped out between the lines and my father rushed out, caught and mounted him.
Soon afterward this second horse was wounded and my father again dismounted and turning, found Andy standing close to him again and handing the second horse to Andy, told him to take it back and keep out of danger, and just then Andy received a gun shot wound in the head from the enemy.
The above is all I remember of the matter. Andy was certainly a brave and loyal boy.
Yours truly,
Vespasian Warner

In spite of this and other letters of recommendation, the application was denied for lack of documentation by the army, as Smith’s commander at Honey Hill had not included an account of Smith’s actions in the official battle report.

It was not until January 16, 2001, 137 years after the Battle of Honey Hill, that Smith was recognized; President Bill Clinton presented the Medal of Honor to several of Smith’s descendants during a ceremony at the White House on that day.

Corporal Andrew Jackson Smith, of Clinton, Illinois, a member of the 55th Massachusetts Voluntary Infantry, distinguished himself on 30 November 1864 by saving his regimental colors, after the color bearer was killed during a bloody charge called the Battle of Honey Hill, South Carolina. In the late afternoon, as the 55th Regiment pursued enemy skirmishers and conducted a running fight, they ran into a swampy area backed by a rise where the Confederate Army awaited. The surrounding woods and thick underbrush impeded infantry movement and artillery support. The 55th and 54th regiments formed columns to advance on the enemy position in a flanking movement. As the Confederates repelled other units, the 55th and 54th regiments continued to move into flanking positions. Forced into a narrow gorge crossing a swamp in the face of the enemy position, the 55th’s Color-Sergeant was killed by an exploding shell, and Corporal Smith took the Regimental Colors from his hand and carried them through heavy grape and canister fire. Although half of the officers and a third of the enlisted men engaged in the fight were killed or wounded, Corporal Smith continued to expose himself to enemy fire by carrying the colors throughout the battle. Through his actions, the Regimental Colors of the 55th Infantry Regiment were not lost to the enemy. Corporal Andrew Jackson Smith’s extraordinary valor in the face of deadly enemy fire is in keeping with the highest traditions of military service and reflect great credit upon him, the 55th Regiment, and the United States Army.