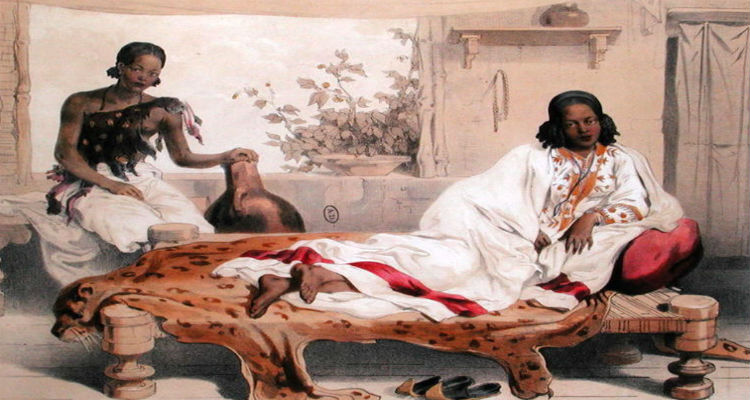 Ethiopia was once ruled by a mighty Queen who destroyed Axum and its countryside, the churches and Christian monuments, killing thousands in the process.  Her campaigns ended both the thousand-year supremacy of Axum and also an era in Ethiopian history. The queen restored Jewish rulership to the whole of Ethiopia.

Information about the queen called Gudit, Yodit, Ga’wa or Judith is contradictory and incomplete. The official Ethiopian Chronicles virtually ignore her. What is remembered is her reported cruelties and depredations against Christians. Therefore, much of what is known about her comes from oral tradition and fragments of non-Ethiopian literature. “She is said to have killed the emperor, ascended the throne herself, and reigned for 40 years.” The downfall of the ancient Aksumite Empire is traditionally ascribed, to this rebel queen. She was considered by the Solomonids of Abyssinia to be an usurper .

In addition to oral tradition there is documentary evidence that the ruling Aksumite dynasty was harassed by a non-Christian queen, who sought to exterminate all members of the royal family, from the House of David. In the History of the Patriarchs of Alexandria, it is recorded that the King of Axum appealed for help from the Patriarch of Alexandria against an unnamed warrior queen. The letter described how a woman, apparently queen of the Bani al-Hamuya (the script of the Arabic text lends itself to various interpretations), was laying waste to the country and harrying the Emperor and his followers from place to place in an effort to wipe out Christianity completely. No help was forthcoming because Queen Judith succeeded in conquering all Axum. The Solomonids remained out of power for some 300 years thereafter.

Queen Judith has also been linked with the Princess Mäsobä-Wärq, daughter of the last Aksumite king. Against her father’s will she married a high-ranking military official and together they took over the Ethiopian throne and founded the Zagwé dynasty. Thus Queen Judith has sometimes been pictured as the founder of the Zagwé dynasty and is said to have been succeeded by her descendants. The Zagwé dynasty ushered in a Golden Age. They ruled from Roha, their new capital in the south, later renamed Lalibela. Their empire controlled a vast territory, much of it mountainous but still larger than that controlled by Axum. Many of Ethiopia’s rock churches at Lalibela date from the reign of the Zagwe king Lalibela (c. 1150-1220). The Zagwe kings ruled until the thirteenth century, when a famous priest, Tekla Haymanot, persuaded them to abdicate in favor of a descendant of the old Axumite Solomonic dynasty.

There is also debate about Queen Judith’s ethnic origins. Some describe her as a pagan, but it is generally accepted that she was of the Jewish religion either by birth or conversion. It is believed that she was of Agaw origin who were said to be a branch of the Falasha Jews. Local traditions around Adi Kaweh where she allegedly died and was buried indicate her faith was pagan-Hebraic, rather than Israelite or Jewish.

Source:
http://www.dacb.org/stories/ethiopia/gudit_.html
When We Ruled by Robin Walker
Black Women in Antiquity by Ivan Van Sertima