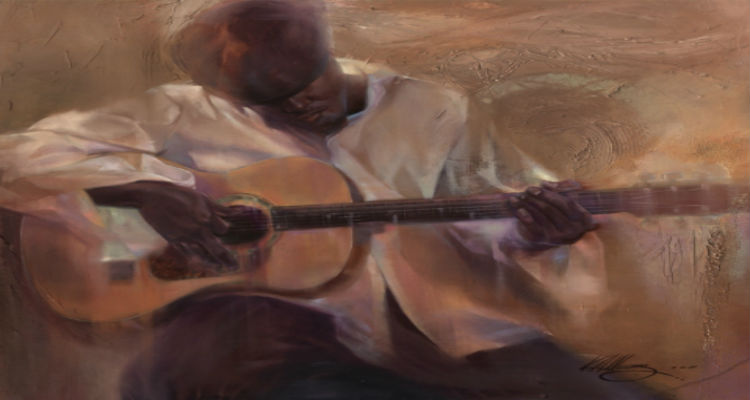 father, it was an honor to be there, in the dugout with you,
the glory of great black men swinging their lives
as bats, at tiny white balls
burning in at unbelievable speeds, riding up & in & out
a curve breaking down wicked, like a ball falling off a table
moving away, snaking down, screwing its stitched magic
into chitlin circuit air, its comma seams spinning
toward breakdown, dipping, like a hipster
bebopping a knee-dip stride, in the charlie parker forties
wrist curling, like a swan’s neck
behind a slick black back
cupping an invisible ball of dreams

& you there, father, regal, as an african, obeah man
sculpted out of wood, from a sacred tree, of no name, no place, origin
thick branches branching down, into cherokee & someplace else lost
way back in africa, the sap running dry
crossing from north carolina into georgia, inside grandmother mary’s
womb, where your mother had you in the violence of that red soil
ink blotter news, gone now, into blood graves
of american blues, sponging rococo
truth long gone as dinosaurs
the agent-oranged landscape of former names
absent of african polysyllables, dry husk, consonants there
now, in their place, names, flat, as polluted rivers
& that guitar string smile always snaking across
some virulent, american, redneck’s face
scorching, like atomic heat, mushrooming over nagasaki
& hiroshima, the fever blistered shadows of it all
inked, as etchings, into sizzled concrete
but you, there, father, through it all, a yardbird solo
riffing on bat & ball glory, breaking down the fabricated myths
of white major league legends, of who was better than who
beating them at their own crap
game, with killer bats, as bud powell swung his silence into beauty
of a josh gibson home run, skittering across piano keys of bleachers
shattering all manufactured legends up there in lights
struck out white knights, on the risky edge of amazement
awe, the miraculous truth sluicing through
steeped & disguised in the blues
confluencing, like the point at the cross
when a fastball hides itself up in a slider, curve
breaking down & away in a wicked, sly grin
curved & posed as an ass-scratching uncle tom, who
like old sachel paige delivering his famed hesitation pitch
before coming back with a hard, high, fast one, is slicker
sliding, & quicker than a professional hitman—
the deadliness of it all, the sudden strike
like that of the “brown bomber’s” crossing right
of sugar ray robinson’s, lightning, cobra bite

& you, there, father, through it all, catching rhythms
of chono pozo balls, drumming, like conga beats into your catcher’s mitt
hard & fast as “cool papa” bell jumping into bed
before the lights went out

of the old, negro baseball league, a promise, you were
father, a harbinger, of shock waves, soon come

Still I Rise by Maya Angelou