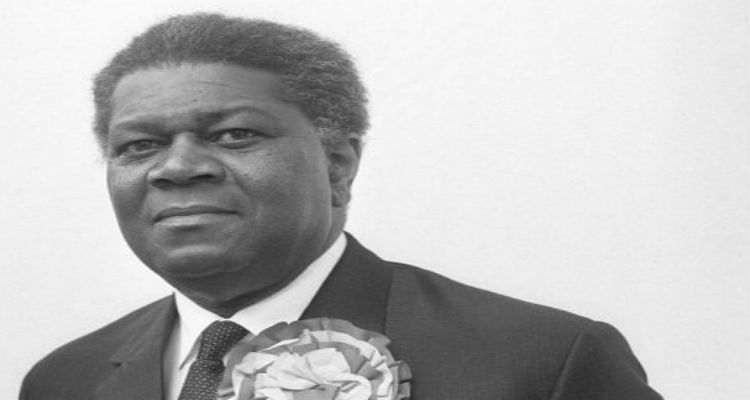 David Thomas Pitt, Baron Pitt of Hampstead, was a Black British politician, general practitioner and political activist, who was the longest serving Black Parliamentarian in the UK, having been granted a life peerage in 1975. He spent his life speaking out for the underrepresented Black community in Great Britain. From 1985 to 1986, Pitt was the president of the British Medical Association. In 2004, he was named as one of “100 Great Black Britons.”

Born in St. David’s, Grenada, Pitt attended Grenada Boys’ Secondary school and was raised a devout Roman Catholic. In 1932 he won Grenada’s only overseas scholarship to attend the prestigious medical school at the University of Edinburgh in Scotland, where he was an active member of Edinburgh University Socialist Society. Pitt graduated with honours. Pitt was always concerned for broader social issues, and after witnessing the poverty of the working classes in the slums of Edinburgh and saw similarities to the rural poverty he witnessed as a child, he joined the Labour movement in 1936. Nicholas Rea, in the British Medical Journal, said of Pitt: “It was in the slums of Edinburgh as much as in the Caribbean that he became convinced of the links between poverty, disadvantage, and ill health”.

Pitt returned to the Caribbean in 1938 and practiced medicine in St. Vincent and Trinidad. There he met and married Dorothy Alleyne; they had three children. His passion for social justice continued alongside his medical career. In 1941, Pitt was elected to the San Fernando Borough Council, where he also served as deputy mayor. In 1943, Pitt helped found the West Indian National Party (WINP) and served as its president until 1947. A socialist party, WINP was considered radical in its day because it advocated independence for Trinidad within a West Indian federation. Under Pitt, the party demanded self-government for Trinidad and Tobago, constitutional reform and the nationalisation of commodities industries such as oil and sugar.

In 1947, in order to lobby the British government for independence, he travelled to Great Britain. His efforts were unsuccessful, and he grew disillusioned with West Indian politics. He decided to settle in the London district of Euston, where he established a medical practice that he ran for more than 30 years.

In the 1950s, Pitt was one of the few blacks active in defending the growing black population of Great Britain against discrimination and prejudice. In 1959 Pitt sought to become the first West Indian black to seek a seat in Parliament. After a campaign plagued by racist insinuations and racist death threats, Pitt lost the election. Pitt believed the way to fight racism was to do so within the existing power structure, and subsequently he founded the Campaign Against Racial Discrimination (CARD). CARD, which was Britain’s first civil rights organization, was founded with the encouragement of Martin Luther King Jr. With the organization he endeavoured to help immigrants and improve race relations.

In 1961, he was elected to the London County Council (LCC) as member for Hackney and served on the LCC and its successor, the Greater London Council (GLC), until 1975; he was the first minority candidate to be elected to this position in local government. He was deputy chair of the GLC from 1969 to 1970, and in 1974 he was the first black person to become chair of the GLC.

Pitt’s second attempt to be elected as an MP came in 1970, when he was the Labour candidate for Clapham. Although this had been seen as a safe seat for Labour, the Conservative William Shelton was elected. Enoch Powell was simultaneously campaigning on ending immigration; consequently, many believe that racism was a factor in this general election defeat as well.

In 1975, the Prime Minister, Harold Wilson, recommended Pitt’s appointment to the House of Lords as a life peer, and he was created Baron Pitt of Hampstead, where he was the second black peer. As a member of the House of Lords, he was interested in social services, health, welfare, and education, and played a leading role in campaigning for the Race Relations Act 1976. He was also a leader in the movement against apartheid in South Africa.

According to Pitt himself, however, his most valued honour was his election as president of the British Medical Association from 1985 to 1986, a position few general practitioners achieve. After his death, many lamented that Pitt “should have been the first Labour Member of Parliament.”