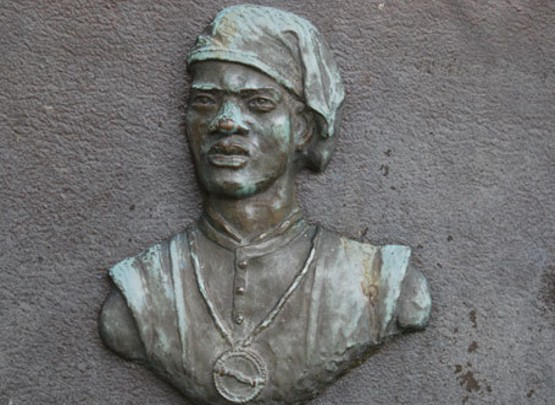 Mathias de Sousa, possibly of African and Portuguese ancestry, is considered the first known Portuguese immigrant on record to have settled in North America. He is also recognized as the first free person of African descent living in Maryland.

Mathias was one of the nine indentured servants brought to Maryland by Jesuit missionaries after he was picked up on the island of Barbados by a ship that was sailing towards the Chesapeake Bay. He had no money to pay for his voyage, so he agreed to work for up to seven years in order to repay the debt. After completing his indenture in 1638, he became an entrepreneur and politician. He started as a mariner and fur trader, earning money by trading English goods with Native Americans for animal furs and food. For a few years, he still continued to work for the priests, as a captain of their trading ship.

In 1641, he commanded a trading voyage to the Susquehannock Indians, and was elected as a representative at a Maryland Assembly meeting. He voted as a citizen, and is on record as having been the first African American to cast a vote in colonial Maryland and in the land which would become the United States. He remains the first known African American and the first person of Portuguese ancestry to have voted in America. In 1642, he served in the Maryland General Assembly, the Colony’s lawmaking body, where he was listed alongside the other assembly members, and became a distinguished Maryland citizen. This would possibly make Mathias de Sousa the first man of African descent to participate in an Assembly in English America.

However, Mathias suffered a reversal of fortune when the Susquehannock Indians fought against the English invaders. Unable to trade for furs during the Susquehannock war, he had trouble paying his rent and buying food. He once again became an indentured servant. In 1642, after court proceedings, Mathias the Sousa lost his freedom to John Lewger over a debt. He then was sued by John Hollis for a debt of 500 pounds of tobacco. For that, the sheriff ordered to seize the “person of Mathias de Sousa” .

Unfortunately, not much is known about Mathias after 1642. However, he remains one of the earliest notable persons of African descent to leave his imprint on Maryland’s history.

A monument to Mathias de Sousa, placed under a mulberry tree on the bank of St. Mary’s River, in Maryland, has the following inscription:“Mathias the Sousa was the first Black Marylander. Of African and Portuguese descent, he was one of the nine indentured servants brought to Maryland by Jesuit missionaries and was on the ARK when Lord Baltimore’s expedition arrived in the St. Mary’s River in 1634.”

Mountain of Peace and Prosperity