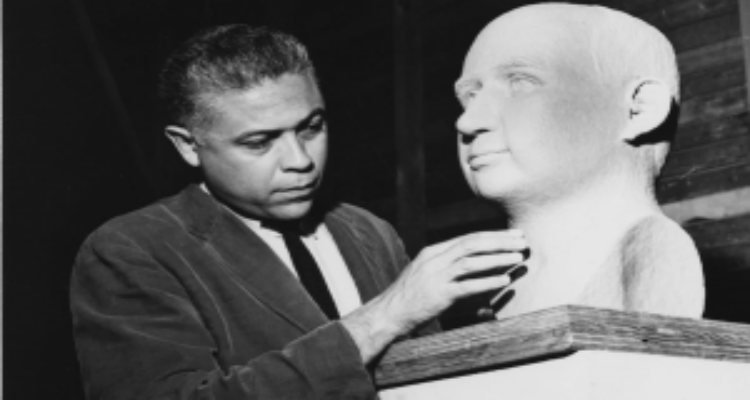 Born on March 28th in 1925 in Baltimore, Maryland, Ed Wilson became interested in art as a child while recovering from rheumatic fever. When he returned to school full time his teachers encouraged his art, but his father, concerned about the economic prospects of a black artist, persuaded him to study architecture and civil engineering. 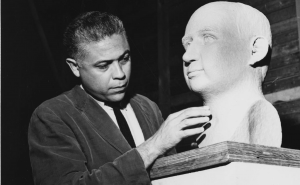 During a wartime stint in the Army, however, Mr. Wilson experienced such extreme prejudice he decided a black architect would face such obstacles that he might as well make a life for himself as an artist. After serving in the United States Army from 1943 to 1946, he studied painting at the University of Iowa but eventually switched his focus to sculpture. After earning his M.A. degree from the University of Iowa in 1953, Wilson taught at North Carolina College (now North Carolina Central College) in Durham.

There he met American sculptor William Zorach who became a lifelong friend and artistic influence. While in Durham, Wilson was deeply involved in the civil rights movement. The influence of the movement is apparent in his subsequent works, including Minority Man (1957, State University of New York, Binghamton), carved in red hickory wood, which depicts the elongated torso of a male figure, head turned upward, and hands clasped at his chest. It is intended to satirize a begging attitude, which, Wilson felt, many people associate with minority groups.

Mr. Wilson had been deeply involved in the civil rights struggle in North Carolina, and the experience influenced his art. Many of his works also reflected his early interest in painting. For all their varied shapes, the focal points of a Wilson sculpture are often small-scale images on a sometimes hidden surface.

At Boys and Girls High School in Brooklyn, for example, the message of Mr. Wilson’s ”Middle Passage,” ostensibly three gently curving slabs of concrete nestled together outside the school, does not become apparent until one takes a second, closer look, squeezing between the slabs to examine narrow bands of bronze depicting the horrors of a slave ship.

In 1964, Wilson accepted an invitation to develop a studio art program at Harpur College of the State University of New York at Binghamton. He was soon made chairman of the college’s department of art and art history. An exhibition of Wilson’s work at Harpur College helped win him a commission to design a park in downtown Binghamton honoring President John F. Kennedy. At the center of the triangular JFK Memorial Park, which was completed in 1969, a three-sided column rises. Bronze relief panels on the sides of the column, entitled The Seven Seals of Silence, depict the ways in which people refuse to participate or take an active interest in solving the problems of our time.

A panel called The Conformists, for example, portrays those who unquestioningly accept prevailing attitudes. The JFK Memorial Park won critical praise for its moving departure from traditional memorial sculpture. Wilson’s Second Genesis (1969-1971) is displayed at Lake Clifton High School, Baltimore, Maryland. It is a work in multiple pieces, featuring eight large aluminum blocks that display impressions of full-sized, robot-like human figures. This work offers a commentary on the consequences of an increasingly mechanized society. 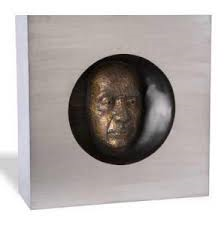 The Art of Bryan Collier

I studied with Professor Wilson in 1975 and he was the person who woke me up. I had been making sculpture since I was 3 and never had considered going to school for it or making it my life’s work. But after taking a class with Professor Wilson, I transferred to art school. I have a master in sculpture and have him to thank. I finally looked him up so much later than I should have. I am writing this in case there is anyone interested – his kids or researchers – who want to speak with me about my experience.