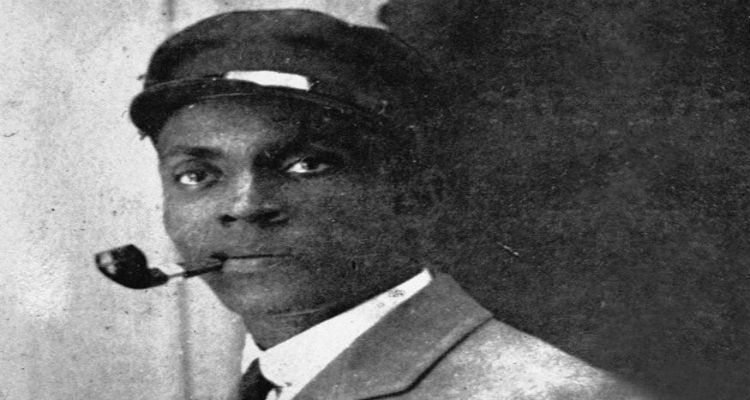 Frederick Bruce Thomas was born in 1872 in Coahoma County, Mississippi. His parents were successful farmers, owning a two-hundred acre farm. In 1879 they donated land to establish one of the first African Methodist Episcopal churches in the region. In 1886, an envious rich whyte planter who resented their success tried to steal their land. The Thomases took the issue to court, and won. However, when the planter appealed to the Mississippi Supreme Court in 1890, the Thomases decided to move to Memphis. There, Thomas’s father was brutally murdered.

The murder of his father prompted Thomas to set out for Chicago and, later, Brooklyn, where he worked as a waiter. In 1894, Thomas’s German music professor recommended that he attend a conservatory in London, where he had been accepted as its first nonwhyte student; Thomas was a great lover of music and hoped to become a singer. England at that time was welcoming to Black people in ways that the United States could not have been. Thomas used his savings for the journey to England, but was left with no tuition money to attend the conservatory. He spent time working as a waiter at hotels or restaurants before traveling to Milan, Venice, Trieste, Vienna, and Budapest. In 1899, after crisscrossing the European Continent, mastering French, and honing his skills as a waiter and a valet, he signed on to accompany a nobleman to Russia.

According to Vladimir Alexandrov, author of The Black Russian:

“Thomas’s career in Moscow proved to be more successful than he, or anyone else, could ever have imagined. He found no “color line” there, as he put it, and in a decade went from being a waiter, to a maître d’hôtel, to a senior assistant to the owner of the swankiest restaurant in the city—the famous “Yar,” a favorite of millionaires, grand dukes, and Gregory Rasputin, imperial Russia’s extraordinary evil genius. Thomas was so good at his job and made so much money from munificent tips that in 1911, together with two Russian partners, he rented a large entertainment garden called “Aquarium” near the city center that had recently failed. Within a year, “Thomas and Co.” transformed it into one of the most successful venues for popular theatrical entertainment in Moscow, a status that it kept until the Revolution. In 1912, Thomas reinvested his profits in a variety theater in the center that he named “Maxim” and that also immediately became a favorite of Moscow’s night owls. Occasional American tourists who passed through Russia on their European tours would report their astonishment back home at having encountered a “prosperous” and “diamond bedecked” black American in such an unexpected setting”.

Thomas became a Russian citizen, and may have been the first African American ever to do so. He married three times and fathered five children.

However, during the Russian Revolution, Thomas fled to Turkey. In 1919, “after surviving hair-raising perils, he managed to reach Constantinople with most of his family”; having lost all his wealth. Within three months of arriving he opened an entertainment garden on the city’s outskirts, and quickly emerged as the city’s preeminent nightclub owner. Thomas was also the first to import jazz to Turkey, and its popularity allowed him to regain some of his wealth once again. Thomas eventually fell on hard times, and became in debt. He found himself unable to return to the United States and was thrown into debtor’s prison.

The extraordinary life of Frederick Bruce Thomas was virtually forgotten until Yale University literature scholar and historian Vladimir Alexandrov came across his name while reading the memoirs of Alexander Vertinsky, a singer who was very popular in Russia before the Revolution and in Europe in the 1920s. In his memoir, Vertinsky described how he escaped from the Bolsheviks in the south of Russia in 1920 and landed in Constantinople, where he began to perform in an entertainment garden that belonged, as he phrased it, “to our famous Russian Negro Fyodor Fyodorovich Tomas, the owner of the famous ‘Maxim’ in Moscow.” Like Thomas, Alexandrov found himself crisscrossing the European continent in search of Thomas’s story. Alexandrov’s research “in a labyrinth of archives and libraries in the United States, Russia, France, England, and Turkey,” eventually led to the book, The Black Russian (2013).