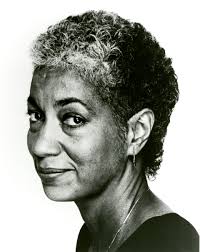 June Jordan (July 9, 1936 – June 14, 2002), the Caribbean-American poet, activist, journalist, essayist and teacher, was known for her fierce commitment to human rights and progressive political agenda. Over a career that produced twenty-five volumes of poems, essays, libretti, and work for children, Jordan first rose to fame in the early ’70s with declamatory poems inspired by African-American vernacular. A prolific writer across genres, Jordan’s poetry is known for its immediacy and accessibility as well as its interest in identity and the representation of personal, lived experience—her poetry is often deeply autobiographical. Regarded as one of the key figures in the mid-century African American social, political and artistic milieu, Jordan also taught at many of the country’s most prestigious universities including Yale, State University of New York-Stony Brook, and the University of California-Berkley.

Born July 9, 1936, in Harlem, New York, Jordan had a difficult childhood and an especially fraught relationship with her father. Her parents were both Jamaican immigrants and, she recalled in Civil Wars: Selected Essays, 1963-80 (1981), “for a long while during childhood I was relatively small, short, and, in some other ways, a target for bully abuse. In fact, my father was the first regular bully in my life.” While life in the Jordan household was often turbulent, Jordan credits her father with passing on to her a love of literature, and she began writing her own poetry at the age of seven. In her teens, she attended the Northfield School for Girls in Massachusetts, and in 1953 enrolled at Barnard College, where she would earn her B.A. She was married in 1955, and divorced after having one child.

Jordan was active in the civil rights, feminist, antiwar and gay and lesbian rights movements, even as she became known as a writer. Jordan self-identified as bisexual in her writing. In 1967, after running poetry workshops for children in Harlem, Jordan began her teaching career at the City College of New York. She taught at Yale University and Sarah Lawrence College, and became a professor of English at the State University of New York at Stony Brook, where she directed The Poetry Center. In 1988, she was appointed professor of African-American Studies at the University of California, Berkeley, where she founded the influential poetry program Poetry For the People.

June Jordan was the author of more than twenty-five major works of poetry, fiction and essays, as well as numerous children’s books. Jordan wrote the librettos for the operas Bang Bang Uber Alles with music by Adrienne Torf, and I Was Looking at the Ceiling and Then I Saw the Sky, with music by John Adams; she wrote lyrics frequently for other musicians, as well as plays and musicals. Her journalism was published widely in magazines and newspapers around the world, and she was a regular columnist for The Progressive. An electrifying speaker, Jordan collected many of her most influential speeches and addresses in her books of essays.

Jordan earned numerous honors and awards, including a 1969-1970 Rockefeller grant for creative writing, a Yaddo residency (1979), a National Endowment for the Arts fellowship (1982) and the Achievement Award for International Reporting from the National Association of Black Journalists (1984). Jordan also won the Lila Wallace Reader’s Digest Writers Award (1995-1998), the Ground Breakers-Dream Makers Award from The Woman’s Foundation (1994), the Chancellor’s Distinguished Lectureship from the University of California at Berkeley, the PEN Center USA West Freedom to Write Award (1991) and a congressional citation for her outstanding contributions to literature, the progressive movement and the civil rights movement.

Author Toni Morrison commented: “In political journalism that cuts like razors in essays that blast the darkness of confusion with relentless light; in poetry that looks as closely into lilac buds as into death’s mouth… [Jordan] has comforted, explained, described, wrestled with, taught and made us laugh out loud before we wept…I am talking about a span of forty years of tireless activism coupled with and fueled by flawless art.” Poet Adrienne Rich noted: “whatever her theme or mode, June Jordan continually delineates the conditions of survival- of the body, and mind, and the heart”. Alice Walker stated: “Jordan makes us think of Akhmatova, of Neruda. She is among the bravest of us, the most outraged. She feels for all of us. She is the universal poet.”