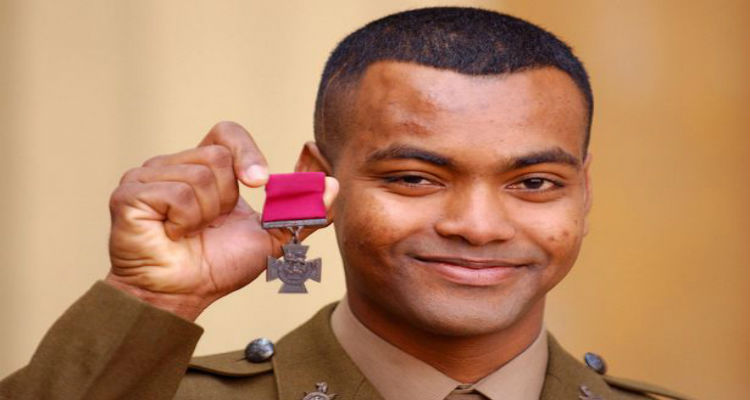 Johnson Gideon Beharry is Britain’s highest decorated serving soldier. He became a national hero after risking his life to save a group of wounded soldiers in Iraq. On 18 March 2005, the Black British Army soldier was awarded the Victoria Cross the highest military decoration for valour in the British and Commonwealth armed forces. Beharry is the first living soldier to be awarded the Victoria Cross for more than 30 years.

Beharry was born in Grenada on 26 July 1979. He moved to the United Kingdom in 1999, at the age of 20 to study, however, his life soon took a turn for the worse. Beharry became a part of a gang, and although he never got into trouble with the police, he witnessed his friends being imprisoned “for five or six years for getting involved in violence or drugs.” He decided to join the army after seeing a recruitment advertisement and became part of the Princess of Wales’s Royal Regiment in August 2001. After training at Catterick, he became a driver of Warrior armoured vehicles in C Company, 1st Battalion. Prior to Iraq, he served for six months in Kosovo and three months in Northern Ireland.

On 1 May 2004, Beharry was driving a Warrior Tracked Armoured Vehicle that was hit by multiple rocket propelled grenades. The platoon commander, the vehicle’s gunner and a number of other soldiers in the vehicle were injured. Beharry was forced to open his hatch to steer his vehicle, exposing his face and head to withering small arms fire. Beharry drove the crippled Warrior through the ambush, taking his own crew and leading five other Warriors to safety. He then extracted his wounded comrades from the vehicle, all the time exposed to further enemy fire.

Having returned to duty following medical treatment, on 11 June 2004 Beharry was again driving the lead Warrior of his platoon through Al Amarah when his vehicle was ambushed. A rocket propelled grenade hit the vehicle six inches from Beharry’s head, and he received serious shrapnel injuries to his face and brain. Other rockets then hit the vehicle, incapacitating his commander and injuring several of the crew. Despite his life-threatening injuries and with the blood from his head injury obscuring his vision, Beharry managed to continue to control his vehicle, and forcefully reversed the Warrior out of the ambush area. The vehicle continued to move until it struck the wall of a nearby building and came to rest. Beharry then lost consciousness as a result of his wounds. He required brain surgery for his head injuries, and lost 40 per cent of his brain through surgery. Doctors feared his chances of living a normal life were slim. He was still recovering in March 2005 when he was awarded the Victoria Cross.

The full citation reads as follows:

“Private Beharry carried out two individual acts of great heroism by which he saved the lives of his comrades. Both were in direct face of the enemy, under intense fire, at great personal risk to himself (one leading to him sustaining very serious injuries). … Beharry displayed repeated extreme gallantry and unquestioned valour, despite intense direct attacks, personal injury and damage to his vehicle in the face of relentless enemy action.”

As a result of his heroism, Beharry was unfit for duty due to the serious nature of his injuries in combat. He began working in a recruitment and media relations role for the Ministry of Defence since 2004. Beharry also threw himself into charity work, helping other injured soldiers through organisations like Help For Heroes. He was promoted to the rank of lance corporal on 26 September 2006, and was then promoted to corporal in 2012.

In February 2007 his portrait was presented to the National Portrait Gallery in London by the artist Emma Wesley and has since become part of the gallery’s collection. On 30 June 2012 Beharry carried the torch for the 2012 Summer Olympics through the National Memorial Arboretum in Alrewas.

His book, entitled Barefoot Soldier, was ghostwritten in collaboration with Nick Cook and was published in October 2006.