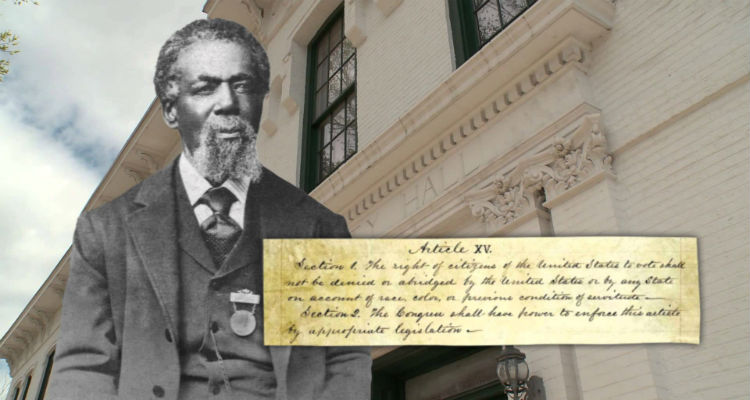 Thomas Mundy Peterson (October 6, 1824 – February 4, 1904), a school custodian from Perth Amboy, New Jersey was the first African American to vote in the United States, as a result of the adoption of the Fifteenth Amendment. Peterson cast his historic vote on March 31, 1870, one day after the ratification of the amendment.

Peterson was born in Metuchen, New Jersey. His father, also named Thomas, worked for the Mundy family. His mother, Lucy Green, was enslaved to Hugh Newell and received her freedom at age 21 by Newell’s will.

Peterson was a school custodian and general handyman in Perth Amboy. Active in the Republican Party, he became the city’s first African-American to hold elected office, on the Middlesex County Commission. He was also the city’s first “colored” person to serve on a jury.

Peterson voted in a local election held at Perth Amboy City Hall over the town’s charter. Some citizens wanted to revise the existing charter while others wished to abandon the charter altogether in favor of a township form of government. Peterson cast his ballot in favor of revising the existing charter. This side won 230 to 63. Peterson was afterward appointed to be a member of the committee of seven that made the revisions.

An interview with Peterson revealed who encouraged him to vote, “I was working for Mr. T. L. Kearny on the morning of the day of election, and did not think of voting until he came out to the stable where I was attending to the horses and advised me to go to the polls and exercise a citizen’s privilege.” Peterson also spoke about his voting experience in the election, “As I advanced to the polls one man offered me a ticket bearing the words “revised charter” and another one marked, “no charter.” I thought I would not vote to give up our charter after holding it so long: so I chose a revised charter ballot.”

To honor Thomas Mundy Peterson as the first African-American voter after the passage of the 15th Amendment, the citizens of Perth Amboy raised $70 (over $1,000 in 2010 dollars) to award him with a gold medallion in 1884. The medallion had the face of Abraham Lincoln engraved on one side. While the side opposite to that the medallion reads “presented by citizens of Perth Amboy N.J. to Thomas Peterson the first colored voter in the U.S. under the provisions of the 15th Amendment at an election held in that city March 13, 1870.” It was presented to Thomas Mundy Peterson on Memorial Day, which was then called Decoration Day, May 30, 1884. He is said to have loved the medal and never considered himself properly dressed without it affixed to his left breast. Later in life financial instability forced Peterson to sometimes pawn the medallion. It is currently housed at the historically African-American Xavier University of Louisiana.

While he is known today as “Thomas Mundy Peterson,” there are no contemporary records that include the three names together. The one exception is the cover for the program describing the ceremony when he was given the “voting medal,” and that calls him “Thomas Peterson-Mundy.” Contemporary documents refer to him as either Thomas Peterson or Thomas (or Tom) Mundy. His death certificate, the undertaker’s accounts book and a land deed all refer to him as “Thomas H. Peterson.” In the obituary appearing in The Perth Amboy Evening News he is called Thomas Henry Peterson.

Thomas Peterson is buried at the St. Peters Episcopal Church cemetery in Perthy Amboy, New Jersey. When his grave was found years after his passing in 1904, it was given a historical marker. In New Jersey, March 31 is annually celebrated as Thomas Mundy Peterson Day in recognition of his historic vote.

In October 1989, the school where Peterson had worked was renamed after him. Now currently on State Street, Perth Amboy.