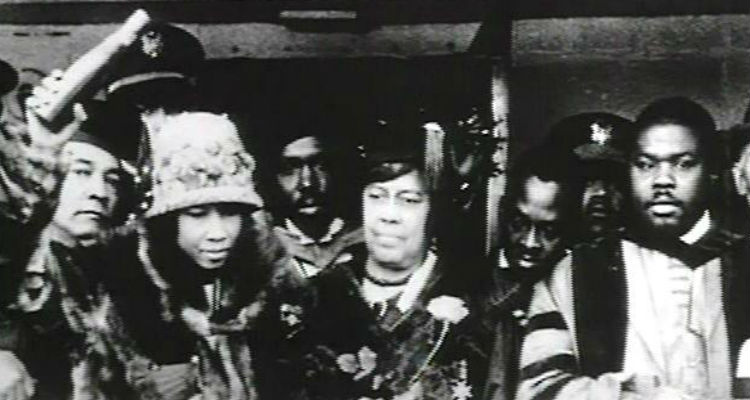 Henrietta Vinton Davis was a Shakespearean actor and public speaker. She was proclaimed by Marcus Garvey to be “the greatest woman of the [African] race”. Davis has come to be considered the physical, intellectual, and spiritual link between the Abolitionist movement of Frederick Douglass and the Back to Africa movement of Marcus Garvey. 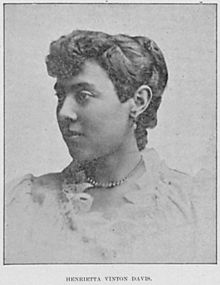 Davis was born in the city of Baltimore on August 15, 1860, to musician Mansfield Vinton and Mary Ann (Johnson) Davis. Her father, who was a pianist, died shortly thereafter. Six months later in 1861, her mother married George A. Hackett,  one of the most prominent Africans in Baltimore at that time. His lobbying efforts are credited with swaying public opinion among the citizens of Maryland to defeat the 1859 Jacobs Bill. The intention of that bill was to deport from Maryland all adults of African ancestry and enslave all free African children. It was considered a response to the raid on Harper’s Ferry by John Brown. Hackett died in April of 1870 after voting despite warnings to the African community in Baltimore against doing so.

A year later Davis moved with her mother south to Washington, DC. In 1875, at the age of 15, Davis passed the necessary examinations and became a teacher in the Maryland Public School System. In 1878, she became the first African American woman employed by the Office of the Recorder of Deeds in Washington, DC. Davis began her elocution and dramatic arts education in 1881 and by 1883 was touring the Northeast and Midwest as a popular speaker. During this time she married T. Thomas Symmons, who became her manager.

In 1885 Henrietta formed the Davis Miller Concert and Dramatic company. In 1893, when African Americans were prevented from taking part in the Chicago World’s Fair she produced William Edgar Easton’s play Dessalines. She subsequently traveled to the Caribbean on a tour of that region, where she collaborated on writing a play entitled Our Old Kentucky Home with distinguished journalist and future Garveyite John Edward Bruce. She and Symmons divorced sometime in 1899.

In the early 1900s, Davis became more involved with community service work in the form of performing in fundraisers for churches and schools, as well as, returning to teaching. During 1912-13 she toured the Caribbean with singer Nonie Bailey Hardy and managed the Covent Garden Theater in Kingston, Jamaica. She learned of the work of Marcus Garvey during that time.

In 1919, Davis gave up her career as a dramatist to work with Garvey’s Universal Negro Improvement Association — African Communities League (UNIA-ACL). In time Davis became the UNIA-ACL’s first International Organizer, a director of the Black Star Line and the corporation’s Vice-President. On the 1920 maiden voyage of BSL flagship, S.S. Yarmouth (later renamed the S.S. Frederick Douglas) she was the ranking member of the UNIA and member of the board of the Black Star Line. As such, she was essentially in command of the vessel carrying cargo valued in excess of $5,000,000. At stops in Cuba, Jamaica, Panama, and other ports throughout the Caribbean and Central America they were greeted with cheers and fanfare.

On April 20, 1920, a meeting of the Black Star Line was held in New York anticipating the return of the SS Frederick Douglas. Garvey invoked the crowd to cheer rapturously when he proclaimed Davis to be “the greatest woman of the Negro race today” in his remarks.

At the 1920 UNIA convention, Davis was one of the signatories on the Declaration of the Rights of the Negro Peoples of the World. Among its 54 declarations are resolutions designating Red, Black, and Green the symbolic colors of African people, condemnation of the word “nigger” to henceforth cease being used and insisting the word “Negro” be thereafter written with a capital “N”.

Davis rose in rank to become the Fourth Assistant President-General of the UNIA-ACL in 1921. On August 27, 1921, during that year’s UNIA convention, the Potentate Honorable Gabriel Johnson bestowed upon her a Knighthood with the title “Lady Commander Order of the Nile” for her distinguished success as leader and organizer of the UNIA.

As an organizer, Davis had several advantages. Her speaking ability was legendary and her oratorical skills certainly helped her to “reach” people because she kept her public statements eloquent but simple. Secondly, because of her previous travels throughout the Americas, many already knew her as an actress and undoubtedly came to see this new political woman out of curiosity. Upon hearing her, many became convinced of the soundness of the U.N.I.A.

She established UNIA divisions in Cuba, Guadeloupe, St. Thomas, Port-au-Prince, Trinidad and Tobago, and Jamaica. Garvey declared her “the greatest woman of the (African) race today”. After hearing her speak in 1921, a reporter for the California Eagle wrote “she is by sentiment and deed a genuine African patriot, full-fledged, sincere, uncompromising, ready to do, dare and die for her convictions.”

In June 1923 she was unseated by Garvey in an attempt to quell dissent in the UNIA’s New York Headquarters, she was reelected during the August 1924 convention. As the only woman in the UNIA delegation seeking consent to establish a UNIA colony, Davis traveled to Liberia, West Africa in December of 1923. In 1924 she was part of a committee that delivered petitions to U.S. President Calvin Coolidge seeking commutation of Marcus Garvey’s sentence for mail fraud. At the 1929 International Convention of the UNIA, she was elected UNIA Secretary-General.

However, by 1932 she broke with Garvey and became the first Assistant President General of the rival UNIA, Inc. In the 1934 convention, she was elected President of the rival organization.