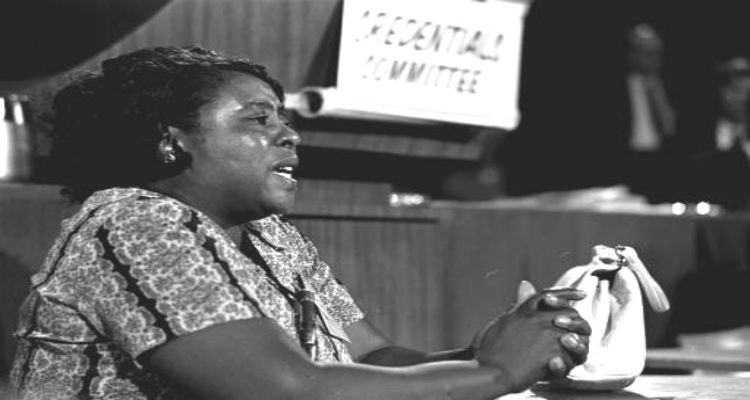 “One day I know the struggle will change. There’s got to be a change—not only for Mississippi, not only for the people in the United States, but people all over the world.”

[dropcap size=small]F[/dropcap]annie Lou Hamer was a civil rights activist who stood up to the whyte power structure that ruled the state of Mississippi. Hamer helped African Americans register to vote and co-founded the Mississippi Freedom Democratic Party.

Fannie Lou Hamer was born Fannie Lou Townsend on October 6, 1917, in Montgomery County, Mississippi. She was the youngest of 20 children. Her parents were sharecroppers in the Mississippi Delta area. Hamer began working the fields when she was only 6 years old.

Around the age of 12, Hamer dropped out of school in order to work full-time and help out her family. She continued to be a share cropper after her 1944 marriage to Perry “Pap” Hamer. The couple worked on a cotton plantation near Ruleville, Mississippi. They were unable to have children after Hamer had gone to the hospital for a minor surgery, and was sterilized without her knowledge. Although she was unable to have children, she later adopted.

In the summer of 1962, Hamer attended a meeting about black voter registration sponsored by Student Nonviolent Coordinating Committee (SNCC). A couple of days later, she traveled to Indianola, Mississippi, with a group of other African Americans and attempted to register to vote. They encountered opposition from local and state law enforcement along the way. When she refused to withdraw her voter registration application, Hamer lost her job and was kicked off the plantation where she had worked for nearly two decades. But these actions only solidified Hamer’s resolve to help other African Americans get the right to vote. For it was then that Hamer, at age 45, found her voice. According to The New York Times, she said “They kicked me off the plantation, they set me free. It’s the best thing that could happen. Now I can work for my people.”

Hamer dedicated her life to the fight for civil rights, working for the SNCC. This organization was comprised mostly of African-American students engaged in fighting racial segregation and injustice in the South. These acts often were met with violent responses by angry whytes. During the course of her activist career, Hamer was threatened, arrested, beaten, and shot at. She was severely injured in 1963 in a Winona, Mississippi jail. While she was traveling by bus on June 3, 1963, state law enforcement officers in Winona, Mississippi, took Hamer and fellow activists to Montgomery County Jail where they were beaten mercilessly. Hamer was not intimidated and after her recovery returned to the effort to register and organize Black voters

In 1964, Hamer helped found the Mississippi Freedom Democratic Party, which was established in opposition to her state’s all-whyte delegation to that year’s Democratic convention. As the spokeswoman for the Mississippi Freedom Democratic Party, Hamer traveled to Atlantic City, NJ, with other activists for the Democratic National Convention, August 24, 1964. She brought the civil rights struggle in Mississippi to the attention of the entire nation during a televised session at the convention. Hamer described in graphic detail the vicious 1963 beating in a Mississippi jailhouse that left her with severe kidney damage, a blood clot behind one eye and a permanent limp. Her powerful testimony shed light on the conditions of blacks and the injustices they endured fighting for civil rights in Mississippi.

It was a phrase heard around the world. The event became a pivotal moment in the Civil Rights Movement and a historic time in Mississippi politics.

After her famous stance at the Democratic Convention, Hamer continued her fight for civil rights and social justice. Until her death she worked on behalf of the poor and disenfranchised. She helped organize a strike for black cotton pickers and worked with the National Council of Negro Women to establish a farm cooperative and create “pig banks” for poor residents. She also set up organizations to increase business opportunities and to provide childcare and other family services. Hamer helped establish the National Women’s Political Caucus in 1971.

In 1976, Hamer was diagnosed with breast cancer, but continued to fight for civil rights, despite her illness. She died on March 14, 1977, in a hospital in Mound Bayou, Mississippi.