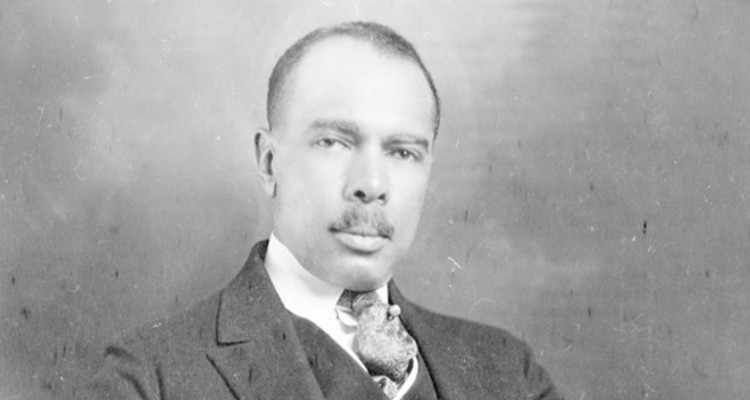 James Weldon Johnson was an African-American writer, who distinguished himself in civil rights, diplomacy, education, journalism, law, literature, and music. In 1900, Johnson wrote the song “Lift Ev’ry Voice and Sing,” which was officially adopted by the National Association for the Advancement of Colored People (NAACP) and widely sung by African Americans as the Black National Anthem. Johnson was also a lawyer, a United States consul in a foreign nation, and served an important role in combating racism through his position in the NAACP.

James Weldon Johnson was born in Jacksonville, Florida on June 17, 1871. His father was a headwaiter at a hotel and his mother was a teacher at the segregated Stanton School. His maternal great-grandmother, Hester Argo, had escaped from Saint-Domingue (Haiti) during the revolutionary upheaval in 1802, along with her three young children, including James’ grandfather Stephen Dillet (1797–1880). Although originally headed to Cuba, their boat was intercepted by privateers and they were taken to Nassau, where they permanently settled. In 1833 Stephen Dillet became the first man of color to win election to the Bahamian legislature.

James’ brother was John Rosamond Johnson, who became a composer. The boys were first educated by their mother, before attending Edwin M. Stanton School. She imparted to her sons, her great love and knowledge of English literature, and the European tradition in music. Johnson attended Atlanta University, and after graduating, became the principal of Stanton School. He expanded the school to include a high school. He also began studying law and in 1898, he was the first African American to pass the bar in Florida. Johnson continued to serve as principal, but he also began practicing law. While balancing his dual career, Johnson found time to write poetry and songs.

In 1900, he wrote, “Lift Every Voice and Sing.” Written as a poem, it was set to music by his brother John in 1899. The song was immensely popular in the African-American community, and became known as the “Black National Anthem.”

The song included the following lines:

Lift every voice and sing, till earth and Heaven ring,
Ring with the harmonies of liberty;
Let our rejoicing rise, high as the listening skies,
Let it resound loud as the rolling sea.
Sing a song full of faith that the dark past has taught us,
Sing a song full of the hope that the present has brought us;
Facing the rising sun of our new day begun,
Let us march on till victory is won.

Johnson moved to New York in 1901 to work with his brother, and together, they achieved success with the composition of around two hundred songs for Broadway. However, while in New York, Johnson also became involved in politics. In 1904, he served as treasurer for the Colored Republican Club. In 1906, the Roosevelt Administration appointed Johnson as the United States consul in Puerto Cabello, Venezuela. While employed by the diplomatic corps, Johnson had poems published in The Century Magazine and The Independent. In 1909, he served as consul in Corinto, Nicaragua until 1913. In addition to his service as consul, during this time, Johnson anonymously published his novel, The Autobiography of an Ex-Coloured Man (1912), the story of a musician who rejects his Black roots for a life of material comfort in the whyte world.

After leaving the public sector, in 1916, Johnson accepted the position of field secretary for the National Association for the Advancement of Colored People (NAACP). Johnson worked at opening new branches and expanding membership. In 1920, the NAACP appointed him executive secretary, making him the first African American to be chosen in this role for the organization. In this position, he was able to bring attention to racism, lynching, and segregation. After ten years of serving as executive secretary, Johnson resigned and accepted a creative writing teaching position at Fisk University.

Throughout his life, Johnson was able to continue writing. He wrote several notable works before and during the Harlem Renaissance. He edited The Book of American Negro Poetry (1922), the first anthology of African American poetry in English. In 1925, he and his brother compiled and edited The Book of Negro Spirituals, the first of a two-volume collection of Black sacred songs.  His book of poetry God’s Trombones (1927) was influenced by his impressions of the rural South, drawn from a trip he took to Georgia while a freshman in college. It was this trip that ignited his interest in the African American folk tradition. In 1927, he also reissued his novel, The Autobiography of an Ex-Coloured Man, in his name. Johnson is also the author of Black Manhattan (1930), a history of African American life and culture in New York, and Along This Way (1933), an autobiography.

A Poet To His Baby Son by James Weldon Johnson,