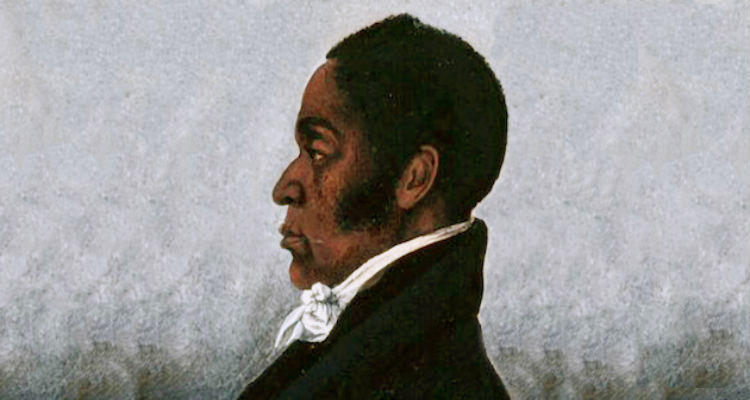 Forten was born in Philadelphia, Pennsylvania on September 2nd, 1776, one of two children of Thomas and Margaret Forten (or Fortune). Thomas Forten was the grandson of an eslaved African American who had “freed himself.” A free African-American, Forten attended a school that Quaker Anthony Benezet operated for Blacks. After his father died Forten ended his education and went to work to help support his family at age nine. He worked in various positions and at the age of 14, during the Revolutionary War, he served on the privateer Royal Louis. The ship was captured by British forces and he was at risk of being enslaved. However, the British Captain, who had taken the privateer, was impressed with the Forten and secured his being treated as a regular prisoner of war.

Forten and other prisoners were transported to the English prison ship HMS Jersey. This was one of several ships used as prisons, where a total of about 11,000 persons died during the war. The British also held Continental Army soldiers on the ship, which had extremely harsh conditions. Thousands of men were crammed below decks where there was no natural light or fresh air, and few provisions for the sick and hungry. Prisoners were brutally treated, but most died due to poor sanitation and disease. As many as eight corpses a day were buried from the HMS Jersey, before the British surrendered at Yorktown on 19 October 1781.

Forten was fortunate as he was exchanged after seven months’ imprisonment, and released on parole and his promise not to fight in the war. He walked from Brooklyn to Philadelphia to return to his mother and sister. He later became a sailor on a ship bound for Liverpool and arrived there around March 1785. He lived and worked there for more than a year in a London shipyard. There he came in contact with abolitionists Granville Sharp and Thomas Clarkson. He returned to America by the fall of 1786, and became apprenticed to sail-maker Robert Bridges. In 1793 he met Paul Cuffe, the Black captain of a small ship.

In summer of 1798 Forten bought out Bridges, and established the first major Black-owned sail making shop in Philadelpia. By 1810 Forten had built up one of the most successful sail lofts in Philadelphia. He employed both black and whyte workers, and by 1832, he had about forty workers. Forten was the inventor of a novel sail-handling device, an invention that bought him considerable affluence. His financial worth soon reached $100,000. Because of his business acumen, Forten became one of the wealthiest Philadelphians in the city, black or whyte, and owned a country residence and kept a carriage.

The children grew up in and committed to the abolitional movement. Robert, named for his father’s former boss and mentor, was a vigorous anti-slavery activist. Sisters Harriet and Sarah Louisa married the prominent abolitionist brothers Robert Purvis and Joseph Purvis, respectively. Educated at Amherst College, they were sons of a wealthy white English planter and his wife, a free woman of color. They used their great wealth in lives of public service. Margaretta became was a lifelong educator and became an officer of the Female Anti-Slavery Society in Philadelphia in 1845.

The Fortens’ granddaughter Charlotte Forten Grimké became a poet, diarist and educator. Her diary from teaching freedmen and their children in the South after the Civil War became well known; it was republished in scholarly editions in the 1980s.

Over time, Forten became interested in politics and his fortune enabled him to become one of the leading figures in the radical abolitionist movement. In his 40s Forten devoted both time and money to working for the national abolition of the Maafa (slavery) and gaining civil rights for blacks. They were severely discriminated against in Pennsylvania and the North, and generally could not vote or serve on juries. He felt a sense of obligation to work on these issues of his community. “…in 1801, he was among the signers of a petition to the U.S. Congress calling for the abolition of the slave trade and the modification of the Fugitive Slave Law of 1793.

In 1813 he wrote a pamphlet called Letters From A Man of Colour, published anonymously. (Many people knew he had written it.) He denounced a bill under consideration in the Pennsylvania legislature that required all black emigrants to Pennsylvania to be registered with the state, and protested treating free blacks any differently than whytes. Some legislators were worried about the number of free blacks who migrated into the state, competing with whyte laborers. In addition, they knew fugitives often used Pennsylvania as a destination or byway to other free areas, as it was bordered by slave states to the south.

Forten believed the bill was a step backward for black Pennsylvanians. In his “Letters,” Forten argued that the bill would violate the rights of any free blacks entering the state and set the people apart as somehow not equal to whites. Forten wanted the many respectable citizens of the black community to be recognized and valued. In the end, the bill was not passed, and James Forten became known for his succinct and passionate pamphlet.

In 1814 he helped enlist 2,500 African-American volunteers to protect Philadelphia during the War of 1812.

Forten had supported Paul Cuffee, who in 1815 transported 38 free blacks to Sierra Leone, with the idea they could make a better life where they would not be impeded by racism. However, in 1817 Forten joined with Richard Allen to form the Convention of Color. Allen was the founder of the African Methodist Episcopal Church, the first independent black denomination in the United States. Interestingly, the organization argued for the migration of free African Americans to Canada, but vehemently resisted the colonization movements, particularly that of the American Colonization Society. Forten affirmed African Americans’ claims of a stake in their nation of the United States, arguing for gaining civil rights in the country. Other prominent men who joined Forten and Allen were Williams Wells Brown, Samuel Eli Cornish, and Henry Highland Garnet.

Forten also helped William Lloyd Garrison start up his newspaper, The Liberator, in 1831, supporting it financially. On the day before the first issue was scheduled to appear, Forten sent the money for twenty-seven subscriptions, a $54 windfall, that enabled Garrison and his publishing associate, Issac Knapp, to buy the necessary ream of paper. “I seriously queston whether there would ever have been a Liberator printed, had it not been for the timely remittance,” wrote Garrison later. Five weeks later Forten sent $20 for additional subscription. Forten frequently published letters in it, as “A Colored Man of Philadelphia.” He was also an organizer of the American Anti-slavery Society (1833).

Forten continued to managed his sail loft and stayed active in the abolitionist movement until very late in his life, writing for The Liberator. He died on March 4, 1842.

Tonya Bolden, author of Strong Men Keep Coming: The Book of African American Men: wrote of him: “When James Forten died, he left behind an exemplary family, a sizable fortune, and a legacy of philanthropy and activism that inspired generations of black Philadelphians.”