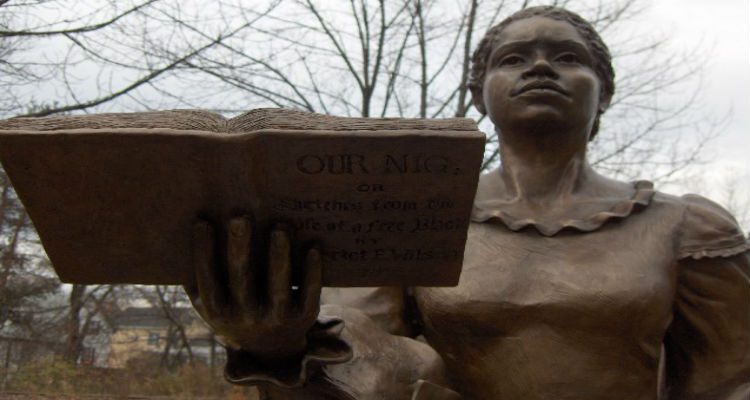 Harriet E. Wilson is considered the first female African-American novelist, as well as the first African American of any gender to publish a novel on the North American continent. Her novel Our Nig, or Sketches from the Life of a Free Black was published anonymously in 1859 in Boston, Massachusetts; and sunk into literary obscurity until 1983 when Henry Louis Gates republished the novel and documented it as the first African-American novel published in the United States. The novel’s discovery forced literary historians to restructure the chronology of Black literature, displacing William Wells Brown from his previously accepted position as the first African American novelist. His Clotel: or, The President’s Daughter: A Narrative of Slave Life in the United States was originally published in London in 1853, but did not appear in the United States until 1864 when it was published in Boston as Clotelle: A Tale of the Southern States. Also, the novel, The Bondwoman’s Narrative by Hannah Crafts, published for the first time in 2002, may have been written before Wilson’s book.

Born Harriet E. “Hattie” Adams in Milford, New Hampshire, Wilson was the mixed-race daughter of Margaret Ann (or Adams) Smith, a washerwoman of Irish ancestry, and Joshua Green, an African-American “hooper of barrels.” After her father died when she was young, her mother abandoned her at the farm of Nehemiah Hayward Jr., a well-to-do Milford farmer “connected to the Hutchinson Family Singers”. Wilson’s mother died aged twenty-seven in Boston, after a violent and intoxicated quarrel with her Black partner. As an orphan, Wilson was bound by the courts as an indentured servant to the Hayward family until the age of 18. They overworked her mercilessly and ruined her health.

Wilson struggled to make a living after gaining her freedom. She married twice and her only son died at age seven in the poor house, where she had placed him while trying to survive as a widow.

On October 6, 1851, Wilson married Thomas Wilson in Milford. Their son, George Mason Wilson, was likely born in May or June of 1852. George, who was probably their first and only child was born at Goffstown, New Hampshire. As Gates explained in his introduction to the second edition of Our Nig, “One of the letters appended to Our Nig states that, abandoned by her husband, the author…was forced…to go to the ‘County House,’ where she gave birth to a child.” After the death of her husband, Wilson married a French apothecary named John Gallatin Robinson, who was 18 years her junior.

Wilson wrote only one novel, Our Nig. On August 18, 1859, she copyrighted it and deposited a copy of the novel in the Office of the Clerk of the U.S. District Court of Massachusetts. On September 5, 1859, the novel was published anonymously by George C. Rand and Avery, a publishing firm in Boston. She wrote her novel in an attempt to raise enough money to be reunited with her child. In her preface, Wilson wrote, “In offering to the public the following pages, the writer confesses her inability to minister to the refined and cultivated, the pleasure supplied by abler pens. It is not for such these crude narrations appear. Deserted by kindred, disabled by failing health, I am forced to some experiment which shall aid me in maintaining myself and child without extinguishing this feeble life.” Toward that end, Wilson asked, “I sincerely appeal to my colored brethren universally for patronage, hoping that they will not condemn this attempt of their sister to be erudite, but rally around me a faithful band of supporters and defenders.”

Unfortunately, the hoped-for patronage did not materialize, and tragically, George died of fever less than six months after her novel was published.

By the 1860s, Wilson had come to be known as “the colored medium” and was available for seances and readings. She was associated with the Spiritualist church and was listed in the Banner of Light as a trance reader and lecturer. A newspaper reported her lecturing on the topic throughout New England, including the towns of Lynn, Stoughton, Stoneham, and Worcester, Massachusetts and Hartford, Connecticut. One report counts an audience of 2,500 at one of these gatherings. Wilson also delivered lectures on labor reform and children’s education. Although the texts of her talks have not survived, newspaper reports imply that she often spoke about her life experiences.

When she was not pursuing Spiritualistic activities, Wilson was employed as a nurse and healer (“clairvoyant physician”). For nearly 20 years from 1879 to 1897, she was the housekeeper of a boarding house in a two-story dwelling at 15 Village Street (near the present corner of Dover [now East Berkeley Street] and Tremont Streets in the South End.) She rented out rooms, collected rents and provided basic maintenance. Despite Wilson’s active and fruitful life after Our Nig, there is no evidence that she ever wrote anything else for publication.

On June 28, 1900, Hattie E. Wilson died in the Quincy Hospital in Quincy, Massachusetts. She was buried in the Cobb family plot in that town’s Mount Wollaston Cemetery. Her plot number is listed as 1337, “old section.”