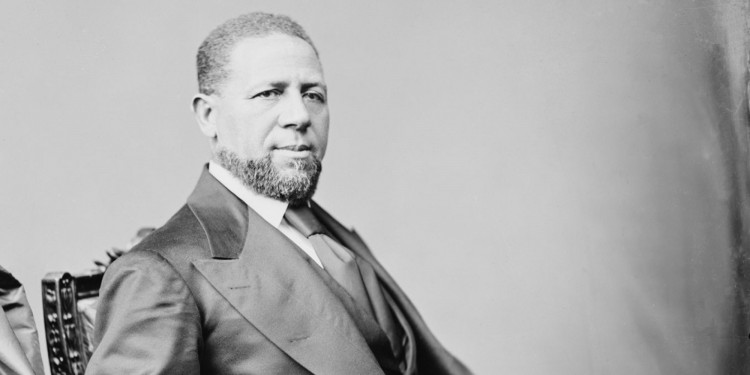 Hiram Rhodes Revels was the first African American to serve in the U.S. Congress. With his moderate political orientation and oratorical skills honed from years as a preacher, Revels filled a vacant seat in the United States Senate in 1870. Just before the Senate agreed to admit a black man to its ranks on February 25, Republican Senator Charles Sumner of Massachusetts sized up the importance of the moment: “All men are created equal, says the great Declaration,” Sumner roared, “and now a great act attests this verity. Today we make the Declaration a reality…. The Declaration was only half established by Independence. The greatest duty remained behind. In assuring the equal rights of all we complete the work.” 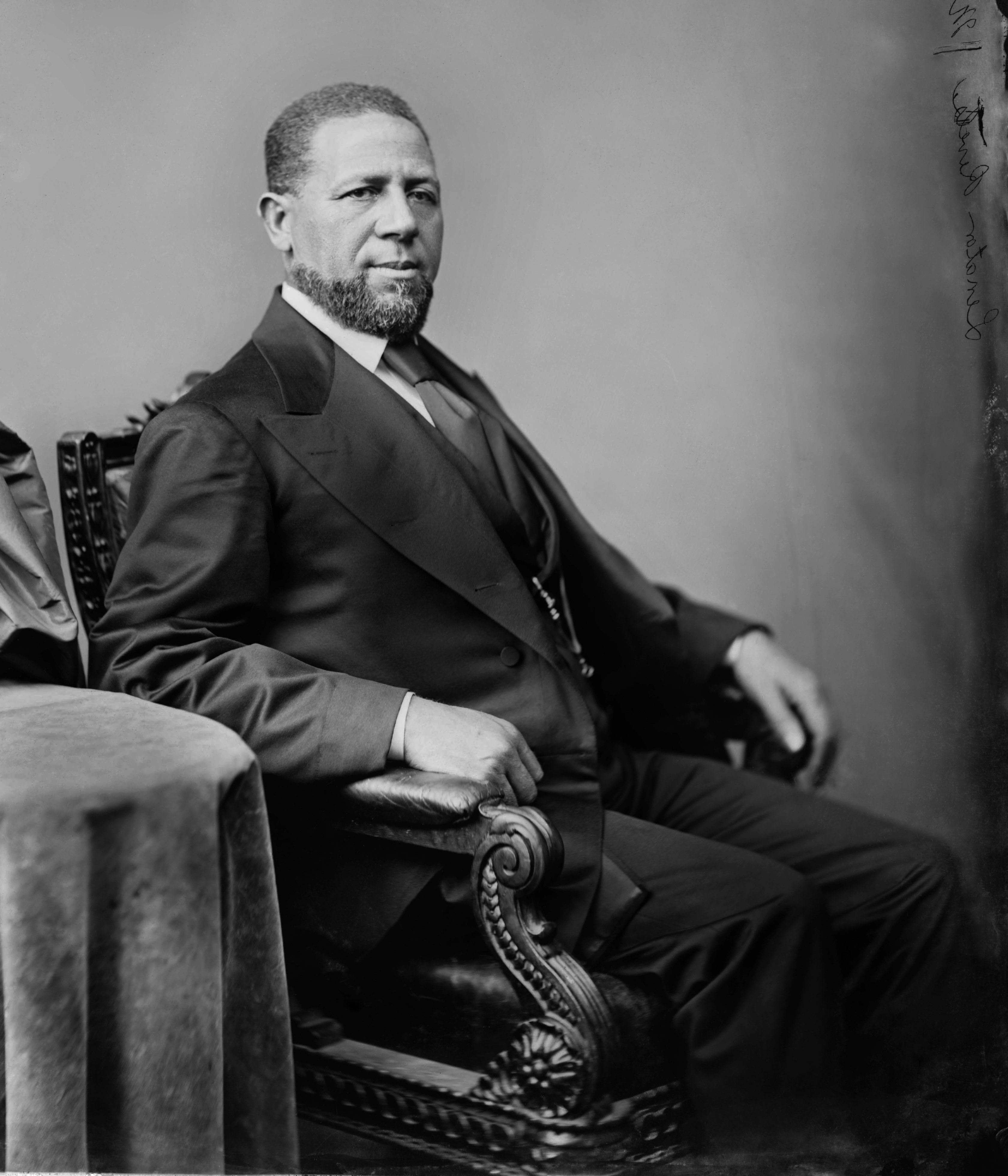 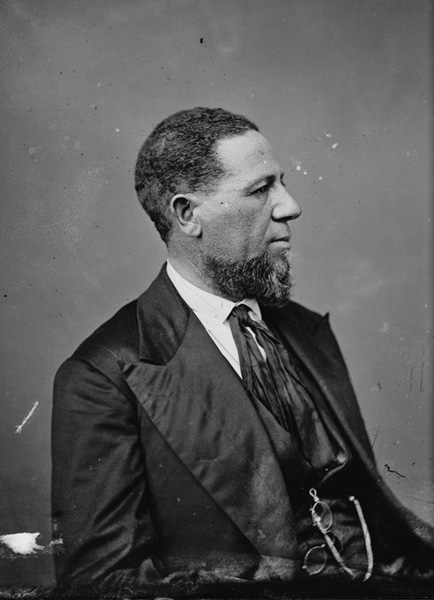 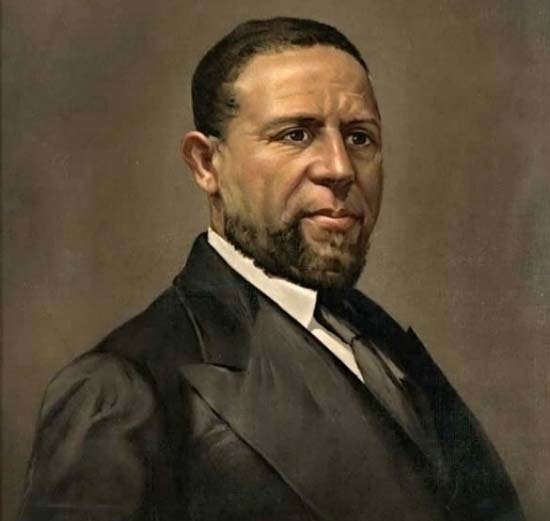 Born September 27, 1827 in Fayetteville, North Carolina, Hiram Revels was the son of free parents of mixed African American and Native American ancestry. Revels moved with his family to Lincolnton, North Carolina in 1842, where he became a barber. Two years later he left the South and enrolled at Beech Grove Seminary, a Quaker institution near Liberty, Indiana. In 1845 he entered Darke County (Ohio) Seminary for Negroes. The same year Revels was ordained a minister in a Baltimore African Methodist Episcopal (AME) Church. In the early 1850s he married Phoebe A. Bass of Zanesville, Ohio, and together they had six children.

Revels traveled throughout the country, carrying out religious work and educating fellow African Americans in Indiana, Illinois, Kansas, Kentucky, and Tennessee. Although Missouri forbade free blacks to live in the state for fear they would instigate uprisings, Revels took a pastorate at an AME Church in St. Louis in 1853, noting that the law was “seldom enforced.” However, Revels later revealed he had to be careful because of restrictions on his movements. “I sedulously refrained from doing anything that would incite slaves to run away from their masters,” he recalled. “It being understood that my object was to preach the gospel to them, and improve their moral and spiritual condition even slave holders were tolerant of me.”5 Despite his cautiousness, Revels was imprisoned for preaching to the black community in 1854. Upon his release, he accepted a position with the Presbyterian Church in Baltimore, Maryland, working alongside his brother, Willis Revels, also an AME pastor. Hiram Revels was the principal of a black school in Baltimore and subsequently attended Knox College in Galesburg, Illinois, on a scholarship from 1855 to 1857. He was one of the few black men in the United States with at least some college education.

When the Civil War broke out in 1861, Revels helped recruit two black regiments from Maryland. In 1862, when black soldiers were permitted to fight, he served as the chaplain for a black regiment in campaigns in Vicksburg and Jackson, Mississippi. In 1863, Revels returned to St. Louis, where he established a freedmen’s school. At the end of hostilities, Revels served in a church in Leavenworth, Kansas. While traveling in Kansas, Revels and his family were asked to sit in the smoking car rather than the car for first–class ticket holders. Revels protested that the language in the smoking car was too coarse for his wife and children, and the conductor finally relented. Revels served in churches in Louisville, Kentucky, and New Orleans, Louisiana, before settling in Natchez, Mississippi, in 1866.

Before the Civil War, fewer than 1,000 free black Mississippians had access to a basic education. Thus, leadership from freedmen such as Revels became vital to the Republican Party for rallying the new electorate in the postwar years.7 It was through his work in education that Revels became involved in politics, taking his first elected position as a Natchez alderman in 1868. He entered politics reluctantly, fearing racial friction and interference with his religious work, but he quickly won over blacks and whites with his moderate and compassionate political opinions. In 1869, encouraged to run by a friend, future Representative John Roy Lynch, Revels won a seat in the Mississippi state senate.8Under the newly installed Reconstruction government, Revels was one of more than 30 African Americans among the state’s 140 legislators. Upon his election, he wrote a friend in Leavenworth, Kansas: “We are in the midst of an exciting canvass…. I am working very hard in politics as well as in other matters. We are determined that Mississippi shall be settled on a basis of justice and political and legal equality.” A little–known politician, Revels attracted the attention of fellow legislators when he gave a moving prayer on the opening day of the session.

At the conclusion of the war, Revels settled in Natchez, Mississippi, and joined the African Methodist Episcopal Church. He continued his pastoral duties and founded new churches. In 1868, Revels was elected alderman. Struggling to keep his political and pastoral duties separate and to avoid racial conflict, Revels earned the respect of both whites and African Americans. His moderation and efforts at conciliation led to his election as a state senator from Adams County, Mississippi. In 1870 Revels was elected as the first African American member of the United States Senate. Revels took his seat in the Senate, after contentious debate, on February 25, 1870 and served through March 4, 1871.

Returning to Mississippi in 1871, Revels was named president of Alcorn College, the state’s first college for African American students. He was dismissed from the Alcorn presidency in 1874 by Governor Ames but returned to the position two years later. Revels retired from Alcorn in 1882. Aside from his duties at Alcorn College, Revels served as Secretary of State ad interim for Mississippi in 1873. Revels actively participated in the 1875 political campaign to oust the “carpet-bag” government of Mississippi. He defended his actions in a letter to President Ulysses Grant which was published in the Daily Times of Jackson, Mississippi, and widely reprinted (Read a portion of the letter here). The next year he became editor of the Southwestern Christian Advocate. While attending to these public activities, Revels actively continued his religious work. It was while attending a church conference in Aberdeen, Mississippi that Hiram Rhoades Revels died on January 16, 1901.