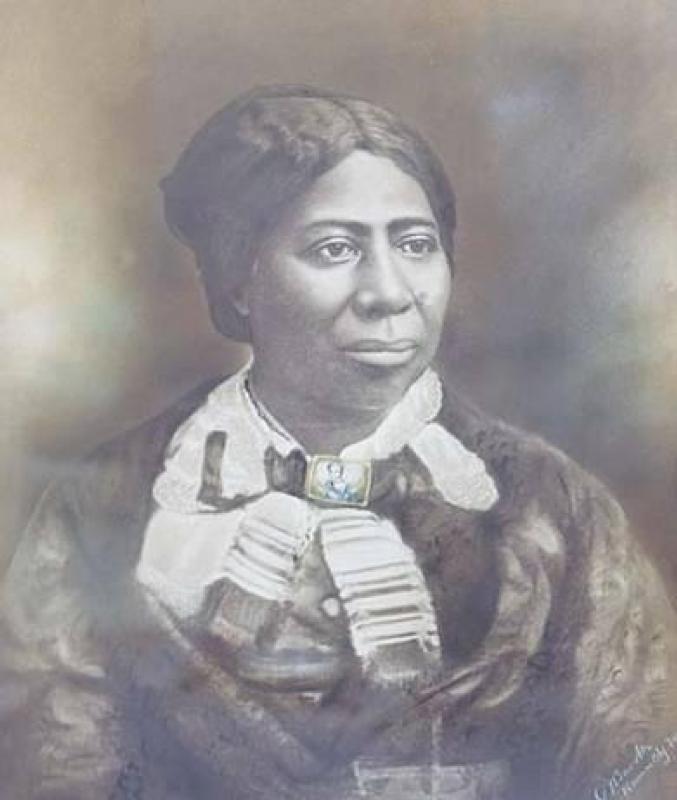 Born as a free Black in rural Maryland, her parents, Mary and Bambarra Murray, were manumitted shortly before her birth. She grew up in Baltimore, where by the age of 17 she had established herself as a laundress and housekeeper. Her laundry work took her to the docks, where she met a ship caulker six years her junior, Frederick Washington Bailey.

Murray’s freedom made Douglass believe in the possibility of his own. When he decided to escape the Maafa (slavery) in 1838, Murray encouraged and helped him by providing Douglass with some sailor’s clothing her laundry work gave her access to. She also gave him part of her savings, which she augmented by selling one of her feather beds by providing money for a train ticket.

After Douglass had made his way to Philadelphia and then New York, Murray followed him, bringing enough goods with her to be able to start a household. They were married on September 15, 1838. At first they took Johnson as their name, but adopted the surname Douglass when they moved to a Quaker community in New Bedford, Massachusetts.

While Frederick began his climb as an abolitionist orator, Anna cared for their five children, born within the first ten years of the marriage: Rosetta, Lewis, Frederick, Charles, and Annie. Murray helped support the family financially, working as a laundress and learning to make shoes, as Douglass’s income from his speeches was sporadic and the family was struggling. She also took an active role in the Boston Female Anti-Slavery Society and later prevailed upon her husband to train their sons as typesetters for his abolitionist newspaper, the North Star. After the family moved to Rochester, New York, she established a headquarters for the Underground Railroad from her home, providing food, board and clean linen for hundreds of fugitive slaves on their way to Canada.

A gulf between the couple widened over the years. Murray, who could barely read and write and was rarely a part of Douglass’s activist life and his growing circle of prominent whyte and black abolitionist colleagues. His long absences from home led to a degree of estrangement between them that was in marked contrast to their earlier closeness. Hurt by her husband’s liaisons with other women, she nevertheless remained loyal to Douglass’s public role; her daughter Rosetta reminded those who admired her father that his “was a story made possible by the unswerving loyalty of Anna Murray.”

After the death of their youngest child, Annie, in 1860, Anna’s health steadily deteriorated. She died of a stroke on August 4 1882 at the family home in Washington D.C. She was initially buried at Graceland Cemetery in Washington, D.C., but the cemetery closed in 1894 and on February 22, 1895, she was moved to Mount Hope Cemetery in Rochester, New York. Frederick Douglass, who died on February 20, 1895, was buried next to her.