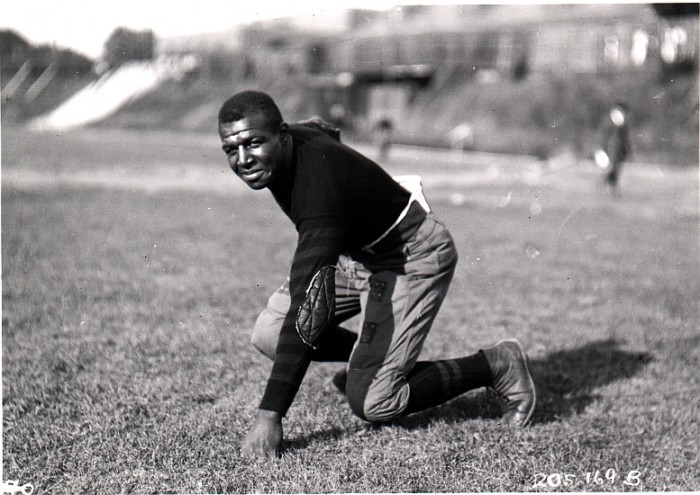 Fred “Duke” Slater was the greatest African American football player of the first half of the 20th century. But his pioneering influence extended beyond the gridiron. After retirement, he broke ground in the legal field as just the second black judge in Chicago history.

Duke Slater (December 9, 1898 – August 14, 1966) was born Frederick Wayman Slater in Normal, Illinois. Duke’s father would move his family to Clinton, Iowa, where he would serve as a pastor in the local Methodist church. Duke played high school football for Clinton. His senior season the Clinton team would meet West Des Moines High in the state final. West Des Moines, led by future teammates the Devine brothers, battled Clinton to a tie 13-13. 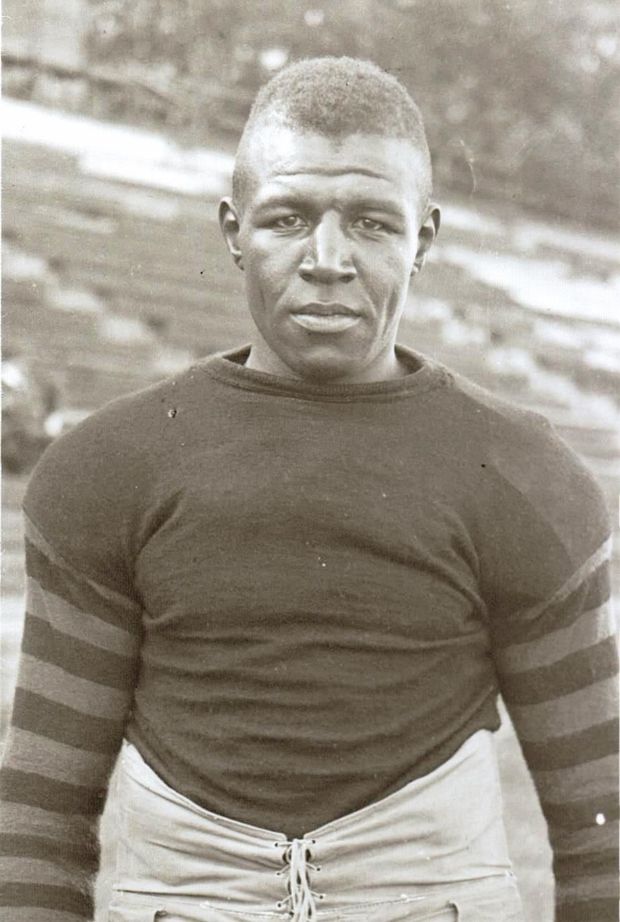 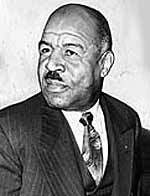 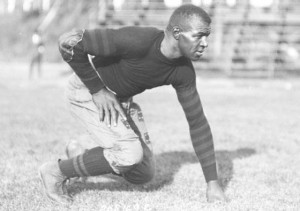 Slater’s father didn’t like the idea of his son playing football. Duke would begin his high school career without his father’s knowldege. Finally, he relented but when it came time to purchase a helmet and shoes Slater’s family only had money for one. Slater would play most of his football career without a helmet.

Slater played football his first year on the Iowa campus in 1918 because of World War I freshman eligibility rules temporarily changing allowing him to play. He’d earn honors his freshman football season. He was named to the all-Iowa team by the Des Moines Register.

Slater was an imposing figure in his time. Although it’s small today, at 6’2″ 215 pounds Slater was a force. Following Iowa’s defeat of Notre Dame in 1921, famous Fighting Irish do-everything player Hunk Anderson said of Slater,

“Duke repeatedly swept me out of the way by body-blocking me from the side. Frequently, I found myself sitting on the grass.”

“so powerful that one man cannot handle him and opposing elevens have found it necessary to send 2 men against him every time a play was sent off his side of the line.”

Duke Slater’s accomplishments are amazing considering the era. Jackie Robinson didn’t break the color barrier in professional baseball until 1947. Slater was one of the first, and for a time, the only African-American NFL football player (1927-29). (Slater’s teammate Fritz Pollard is officially the first African-American NFL player).

After Iowa he played professionally for the Rock Island Independents in 1921. His professional football career lasted 10 seasons. After four seasons with Rock Island he’d play for the Chicago Cardinals until 1931.

By 1927, Slater’s sixth year in the NFL, the owners had begun to discuss banning black players from the league, as major league baseball had already done. That year, eight of the nine African-American players in the league disappeared. Only one remained: Duke Slater. For all but two games, Slater was the only African-American player in the NFL between 1927-1929, the exception coming when he convinced the Cardinals to sign Harold Bradley, Sr. to play alongside him.

Bradley was cut after two games. Slater was named All-Pro in 1927 and 1929. It is believed he was omitted in 1928 because the financially-strapped Cardinals played just half a season that year.

Four other African-Americans played briefly between 1928 and 1933, when the ban went into full effect. It remained so until 1946, when the Rams’ move to the West Coast resulted in a political demand in Los Angeles that they employ black players. They hired two – Kenny Washington and Woody Strode – beating major league baseball integration by a year. But it was two more years before the Detroit Lions became the second team to sign two black players.

By the time of his retirement in 1931, Slater had achieved All-Pro status a total of six times. During his NFL career Slater never missed a game because of injury, starting in a total of 96 of the 99 games he played between the AFL and NFL. Slater was also instrumental in the movement to assemble all-star teams of African-American players. Slater would serve as head coach of the Chicago Negro All-Stars in 1933 and as coach of the semi-professional Chicago Brown Bombers in 1937, the Chicago Comets in 1939, and the Chicago Panthers in 1940.

Slater remains one of the best two-way lineman of his era, a six-time All-Pro at a time when there were barely six black players in all of pro football. Oddly, Duke Slater was a Hall-of-Fame finalist in 1970 and 1971 but did not gain enshrinement and slowly faded away.

Slater was named to the Iowa Sports Hall of Fame in ’51 with Kinnick and former teammate Aubrey Devine. His name is on one of Iowa’s residence halls. Slater Hall is the only residence hall named after a former athlete.