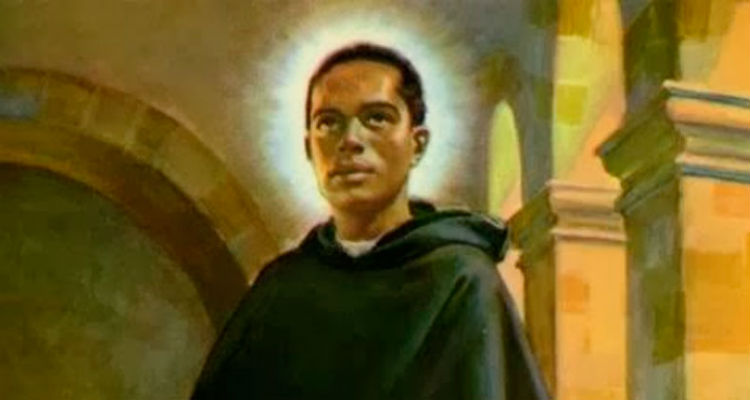 “Compassion, my dear Brothers, is preferable to cleanliness. Reflect that with a little soap I can easily clean my bed covers, but even with a torrent of tears I would never wash from my soul the stain that my harshness toward the unfortunate would create.”

Saint Juan Martin de Porres was a Dominican monk, who was canonized in 1962 by Pope John Paul XXIII. Saint Martin, recognized as Papa Candelo in Santería/Lucumi, is the patron saint of mixed race people, innkeepers, barbers, public health workers and all those seeking racial harmony.

Martin was born in Lima, Peru on December 9, 1579. His father was a Spanish conquistador named Don Juan de Porres, who refused to acknowledge his paternity until Martin was about eight years old. Martin’s mother, Ana Velázquez, was a freed Black woman from Panama, who supported her children by taking in laundry.

Stories of Martín’s remarkable generosity began in his childhood; sent to the local market by his mother, he would often give away the contents of his basket to homeless persons before reaching home. By the time he was 10 he was spending several hours of each day in prayer, a practice he maintained for the rest of his life. He once asked his landlady for the stumps of some candles she had discarded, and she later saw him using their meager light to behold a crucifix before which he knelt, weeping. Perhaps as a result of his spiritual accomplishments, Don Juan de Porres acknowledged that he was Martín’s father, a remarkable admission at the time. His father, however, would once again abandoned Martin and his mother, for good, after the birth of another daughter.

When Martín was 12, he was apprenticed to a barber—a profession that in sixteenth-century society involved much more than cutting hair. He learned the rudiments of surgery: administering herbal remedies, dressing wounds, and drawing blood—something that was thought to be curative at the time.

As Martin grew older, he experienced a great deal of ridicule for being mixed-race. In Peru, by law, all descendants of African or Indians were not allowed to become full members of religious orders. Martin, who spent long hours in prayer, found his only way into the community he longed for was to ask the Dominicans of Holy Rosary Priory in Lima to accept him as a volunteer who performed the most menial tasks in the monastery. In return, he would be allowed to wear the habit and live within the religious community. When Martin was 15, he asked for admission into the Dominican Convent of the Rosary in Lima and was received as a servant boy. During his time in the Convent, Martin took on his old trades of barbering and healing. He also worked in the kitchen, did laundry and cleaned. After eight more years with the Holy Rosary, Martin was granted the privilege to take his vows as a member of the Third Order of Saint Dominic by the prior Juan de Lorenzana who decided to disregard the racist law restricting Martin.

However, not all of the members in the Holy Rosary were as open-minded as Lorenzana; Martin was called horrible names and mocked for being illegitimate and descending from enslaved people. He suffered many incidents of harassment. The monks for whom he was cooking would hide the kitchen’s potholders, and one of the early stories surrounding Martin was that he could then pick up the pots with his bare hands and not be burned.

Martin grew to become a Dominican lay brother in 1603 at the age of 24. Ten years later, after he had been presented with the religious habit of a lay brother, Martin was assigned to the infirmary where he would remain in charge until his death. He became known for encompassing the virtues need to carefully and patiently care for the sick, even in the most difficult situations. He was praised for his unconditional care of all people, regardless of race or wealth. He took care of everyone from the Spanish nobles to enslaved African. He also did not care if the person was diseased or dirty, he would welcome them into his own bed.

Martin was instrumental in founding an orphanage for abandoned children; and took care of enslaved people. A formidable fundraiser, he obtained thousands of dollars for dowries of poor girls so that they could marry, or enter a convent. Martin was a spiritual director to many of his fellow religious brothers. He was also a good friend to a fellow Dominican, St. Rose of Lima.

Martin maintained an austere lifestyle, which included fasting and abstaining from meat. He subsisted for days on bread and water. It is said he had many extraordinary abilities, including levitation, bilocation, miraculous knowledge, instantaneous cures, and an ability to communicate with animals. He was said to be surrounded by a bright light when he prayed, and to be levitated off the floor of a chapel by sheer religious ecstasy. St Martín was said to be capable of bilocation (being in two places at once), and individuals from both Africa and Mexico swore that they had encountered him in their home villages even though he was never known to have left Lima. Patients under his care spoke on several occasions of him having walked through locked doors in order to render medical help.

When an epidemic struck Lima, there were in this single Convent of the Rosary 60 friars who were sick, many of them novices in a distant and locked section of the convent, separated from the professed. Martin is said to have passed through the locked doors to care for them, a phenomenon which was reported in the residence more than once. The professed, too, saw him suddenly beside them without the doors having been opened. Martin continued to transport the sick to the convent until the provincial superior, alarmed by the contagion threatening the friars, forbade him to continue to do so. His sister, who lived in the country, offered her house to lodge those whom the residence of the religious could not hold. One day he found on the street a poor Indian, bleeding to death from a dagger wound, and took him to his own room until he could transport him to his sister’s hospice. The prior, when he heard of this, reprimanded him for disobedience. He was extremely edified, however, by his reply: “Forgive my error, and please instruct me, for I did not know that the precept of obedience took precedence over that of charity.” The prior gave him liberty thereafter to follow his inspirations in the exercise of mercy.

Martin was said to have a supernatural rapport with the natural world. The most famous single story connected with him had to do with a group of mice (or rats) that infested the monastery’s collection of fine linen robes. Martín resisted the plans of the other monks to lay poison out for the mice. One day he caught a mouse and said, “Little brothers, why are you and your companions doing so much harm to the things belonging to the sick? Look; I shall not kill you, but you are to assemble all your friends and lead them to the far end of the garden. Everyday I will bring you food if you leave the wardrobe alone”—whereupon Martín lead a Pied Piper-like mouse parade toward a small new den. Both the mice and Martín kept their word, and the closet infestation was solved for good. Martín loved animals of all kinds and seemed to have unusual skills in communicating with them. He would apply his medical skills to the treatment of a wounded dog found wandering the streets with the same energy he would devote to a sick human. Paintings of Martín often depicted him with a mouse, dog, or cat—or sometimes with a broom, symbolizing his devotion to everyday tasks.

In January of 1639, when Martin was 60-years-old, he became very ill with chills, fevers and tremors causing him agonizing pain. He passed away on November 3, 1639.

By the time he died, he was widely known and accepted. Talks of his miracles in medicine and caring for the sick were everywhere. After his death, the miracles received when he was invoked in such greatness that when he was exhumed 25 years later, his body exhaled a splendid fragrance and he was still intact.

After his death in 1639, letters were sent to Rome pleading for his beatification. He was beatified by Pope Gregory XVI and canonized by Pope John XXIII on May 6, 1962.

His feast day is November 3.

Today, Saint Martin is commemorated by, among other things, a school building that houses the medical, nursing, and rehabilitation science schools of the Dominican University of Santo Tomas in the Philippines. A programme of work is also named after him at the Las Casas Institute at Blackfriars Hall, University of Oxford. He is also the titular saint of the parish of St. Martin de Porres in Poughkeepsie, NY; St. Martin de Porres Marianist elementary school in Uniondale, NY; and St. Martin de Porres Catholic elementary school in Scarborough, ON, Canada. A number of Catholic churches are named after him.

In the 1980 novel A Confederacy of Dunces, Ignatius Reilly contemplates praying to Saint Martin for aid in bringing social justice to the African-American workers at the New Orleans factory where he works. In music, the first track of jazz pianist Mary Lou Williams’s album Black Christ of the Andes is titled St. Martin De Porres.

There are several Spanish and Mexican works regarding his life in cinema and television, referring to his mixed-race origin, his miracles and his life of humilty. The most known movies are Fray Escoba (Friar Broom) (1963) and Un mulato llamado Martin (A mulatto called Martin) (1975).

In the Moone Boy episode Godfellas, the character Martin Moon is shown to be named by his grandfather after San Martin De Porres. Humorously, his grandfather is unable to actually remember any of San Martin’s accomplishments, and simply refers to him as “One of the Black ones” when asked about him.

The Art of Carl Owens