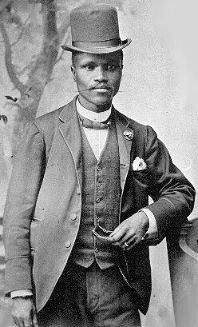 Sontonga, a Xhosa, was born in the city of Uitenhage in the Eastern Cape. He trained as a teacher at the Lovedale Training College after which he was sent to a Methodist mission school in Nancefield, near Johannesburg in 1896. He taught here for nearly eight years. Sontonga was the choirmaster at his school, as well as an amateur photographer. He married Diana Mgqibisa, the daughter of a minister in the African Methodist Episcopal Church, who passed away in 1929. They had a son.

The first verse and chorus of Nkosi Sikelel ‘iAfrika was composed in 1897 and it was originally intended to be a school anthem. He wrote the tune the same year. It was first sung in public in 1899 at the ordination of Reverend Mboweni who was the first Tsonga Methodist minister. Later, the well-known Xhosa poet, Samuel Mqhayi, wrote seven additional stanzas for the song.

The song started to be more well known after John Langalibalele Dube’s Ohlange Institute’s choir used it. They played it at the South African Native National Congress meeting in 1912. By 1925 Nkosi Sikelel ‘iAfrika had become the official song of the African National Congress (ANC) and was also sung during the British Royal visit in 1947. In 1994 Nkosi Sikelel ‘iAfrika and Die Stem van Suid Afrika, the old South African anthem, became South Africa’s national song.

Sontonga passed away on the 18th of April in 1905, at the age of 32. Imvo ZabaNtsundu, an IsiXhosa newspaper reported on the 27 June 1905, that “he was not sick that time. He however suffered at times from stomach ache to the extent that he would predict that these were his last day on this earth.” He was buried in the “non-whytes” section of the Braamfontein Cemetery in Johannesburg.

On 24 September 1996, Heritage Day, the grave of Enoch Sontonga was declared a national monument. Former President Nelson Mandela unveiled a memorial that was erected on the site. At the ceremony, President Nelson Mandela awarded the Order of Meritorious Service (Gold Category) posthumously to Sontonga for his service to our country. His granddaughter, Mrs Ida Rabotape, accepted the award.