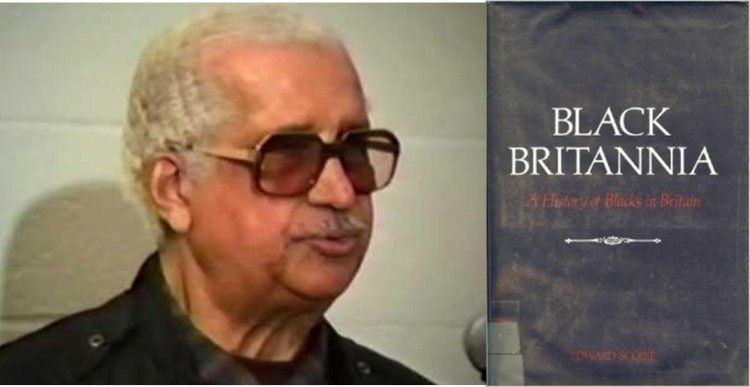 Dr. Edward Vivian Scobie, author of Black Britannia: The History of Blacks in Britain distinguished himself as an authority in tracing the history of Black people in Western Europe.

Dr. Scobie was born in Roseau, Dominica, a former British colony in 1918, and was educated at the Dominica Grammar School. An outstanding athlete, he represented the National teams in cricket and football. During World War II, he left Dominica for England to join the Royal Air Force and stayed on after demobilization until the mid- sixties.

During that time, he worked as a journalist in London where he assumed the name Scobie. He became a correspondent for the Chicago Defender and for Ebony and Jet magazines. He contributed to many London newspapers, magazines and the wire services, and became a frequent broadcaster and scriptwriter for radio and television including the British Broadcasting Services (BBC) Caribbean programs. From 1961 to 1963 he edited Flamingo, a monthly magazine published in London for African people in Britain, Africa and the Caribbean.

Through his various researches and writings, Dr. Scobie became a major authority on the Afrikan presence in early Western Europe. He authored numerous scholarly articles and historical essays on the subject, including a series of five articles for the Journal of African Civilizations. One of these articles, “African Popes,” discussed the lives of the three African pontiffs: St. Victor I (189-199), St. Miltiades (311-314) and St. Gelasius I (492-496). A second contribution was called “The Black in Western Europe.” In “The Chevalier de Saint-Georges,” Dr. Scobie documented the life of the remarkable composer, conductor, violinist, swordsman, equestrian and soldier of eighteenth century France. In “The Moors and Portugal’s Global Expansion,” Dr. Scobie noted that:

“Not only did the Moors in their European conquests leave their learning, their culture and their arts. Their blood, the blood of Africa, was to remain and flow in the veins of many a European, be he aristocrat or commoner. Finally, it is left now to investigate, in some detail, that culture which these Islamic sons of Africa left for the benefit of Europe, particularly Spain, and even more so, Portugal. It is this African cultural heritage which set in motion the expansion of Europe.”

Dr. Scobie returned to Dominica in the mid-1960s and quickly took over the editorship of the Dominica Herald from Phyllis Shand Allfrey who left to establish her own paper, The Star in 1965. Along with Stanley Boyd, editor of The Chronicle, they led a newspaper editor’s protest at the passing of the “Prohibited and Undesirable Publications Act” in July 1968. The protest also led to the formation of the Dominica Freedom Party. Dr. Scobie became vice president of the party, which would come to dominate Dominican politics during the eighties and early nineties.

As an active participant in local politics, he served twice as Mayor of Roseau. By 1972 however, Dr. Scobie had become weary of the narrow confines of local politics and the parochial attitudes in Dominica and moved to the United States to launch a new career in academia. He taught first as an Associate Professor in the African-American and Political Science Departments at, Rutgers, the State University of New Jersey. He also taught at Princeton University and the City University NY.

At the time of his death of acute myocardial infarction, on November 14, 1996, Dr. Edward Scobie was Professor Emeritus of History, Black Studies Department, City College of New York.