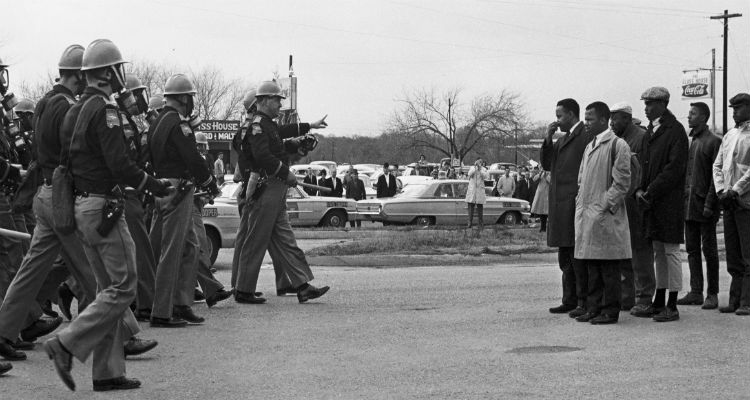 “They came with horses. They came with nightsticks. And I was standing, and people were running… I did not run, so he hit me at the base of my neck, and I became unconsious.” ~Amelia Boynton Robinson

A newspaper photo showing Amelia Boynton Robinson slumped unconscious on the side of a road, drew wide attention to the event, which took place on March 7, 1965 that became known as “Bloody Sunday.”

Between 1961 and 1964, the Student Nonviolent Coordinating Committee (SNCC) had led a voting registration campaign in Selma, the seat of Dallas County, Alabama, a small town with a record of consistent resistance to black voting. In Selma, African Americans made up almost half the population, but only two percent were registered voters.

On February 26, 1965, activist and deacon Jimmie Lee Jackson died after being mortally shot several days earlier by a state trooper during a peaceful march in nearby Marion, Alabama. To defuse and refocus the community’s outrage, James Bevel, the Director of Direct Action of the Southern Christian Leadership Conference (SCLC) called for a march of dramatic length, from Selma to the state capital of Montgomery. Bevel had been working on his Alabama Project for voting rights since late 1963.

Six hundred marchers assembled in Selma on Sunday, March 7, and, led by John Lewis and other SNCC and SCLC activists, crossed the Edmund Pettus Bridge over the Alabama River en route to Montgomery. Lewis and other leaders had asked the demonstrators not to fight back against anyone who committed violence against them during the peaceful protest. Just short of the bridge, they found their way blocked by Alabama State troopers and local police who ordered them to turn around. The marchers paused for a moment, then kept walking. The sheriff warned them that they had two minutes to break up the march. Just one minute and five seconds after a two-minute warning was announced, the statetroopers advanced, wielding clubs, bullwhips, and tear gas. The demonstrators were tear-gassed, clubbed, spat on, whipped, trampled by horses, and jeered by others for demanding the right to register to vote. John Lewis, who suffered a skull fracture, was one of fifty-eight people treated for injuries at the local hospital. Television and newspapers carried pictures of the event that became known as “Bloody Sunday.

The images sickened, outraged, and electrified people throughout the country. Within 48 hours, demonstrations in support of the marchers were held in 80 cities. Many of the nation’s religious and lay leaders, including Martin Luther King, flew to Selma. After one more failed attempt, King led a peaceful march from Selma to Montgomery. Congress responded to these events by enacting the Voting Rights Act of 1965.