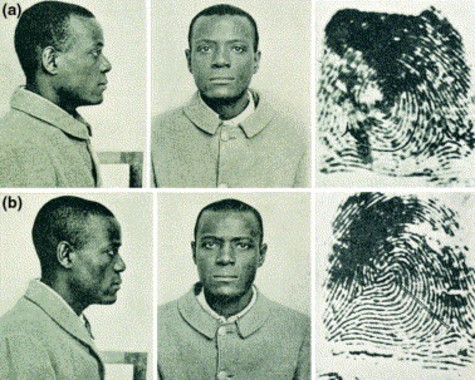 Will and William West were doppelgangers who shared the same name and were both sentenced to jail at Leavenworth Penitentiary in Kansas. Their remarkable case is believed to be part of the reason why fingerprinting became commonly used for identification in the USA.

At the turn of the 20th century, investigators had started using fingerprinting, but the technique was not widely used. In 1901, Scotland Yard had established its first Fingerprint Bureau, and the following year, fingerprints were presented as evidence for the first time in English courts. It was not until 1903, that the New York state prisons adopted the use of fingerprints, followed later by the FBI. To identify suspects, investigators relied on the much-trusted Bertillon system, which “measured dozens of features of a criminal’s face and body and recorded the series of precise numbers on a large card along with a photograph.”

However, in 1903 Will West was sent to Leavenworth federal prison in Kansas. As he was being processed, the admissions clerk, M.W. McClaughry thought he recognized West and asked if he’d ever been incarcerated there. Will replied that he certainly hadn’t. The clerk took Will’s Bertillon measurements, convinced that he had already been to the prison. He then looked up Will’s name in his filing system and found one William West – who looked identical to Will West in the photographs in every respect. They even shared the same Bertillon measurements.

But Will West insisted to McClaughry that it was not him: ‘That’s my picture, but I don’t know where you got it, for I know I have never been here before.’

To McClaughry’s shock, he was absolutely right, too. William West was a different person altogether and in fact had been admitted to the prison two years previously serving a life sentence for murder.

To be sure, officials checked Will’s fingerprints against William’s and this clearly showed they were not the same person.

The case highlighted the flaws in the Bertillon method and by 1904, the prison abandoned the Bertillon system and started fingerprinting all its inmates.