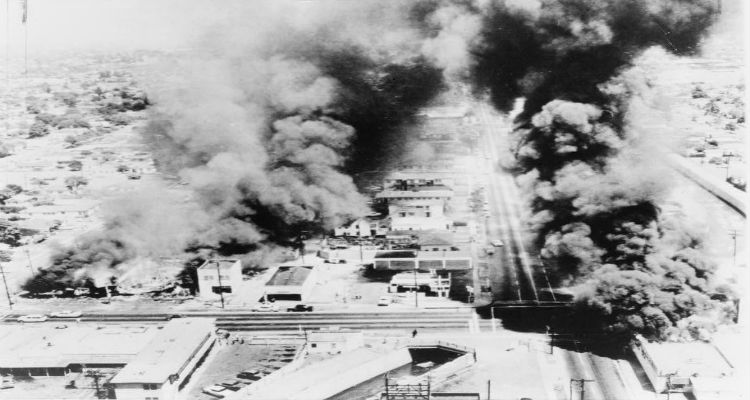 “A riot is the language of the unheard.” ~MLK

The Watts riots, which raged for six days, from August 11 to 17,  in the Watts neighborhood of Los Angeles, was both the largest and costliest urban rebellion of the Civil Rights era.  The six days of confrontation between local residents and “an oppressive system” left 34 dead, 1,032 injured, nearly 4,000 arrested, and $40 million worth of property destroyed. 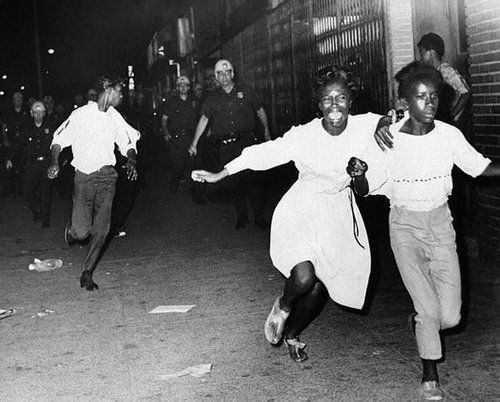 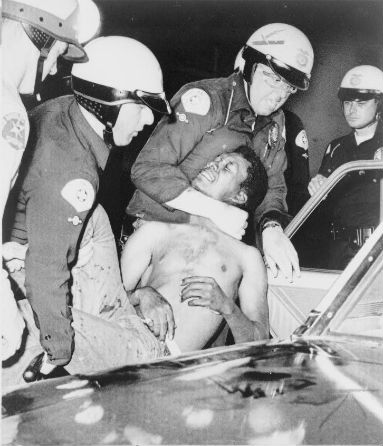 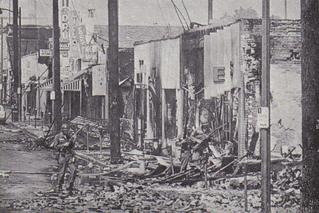 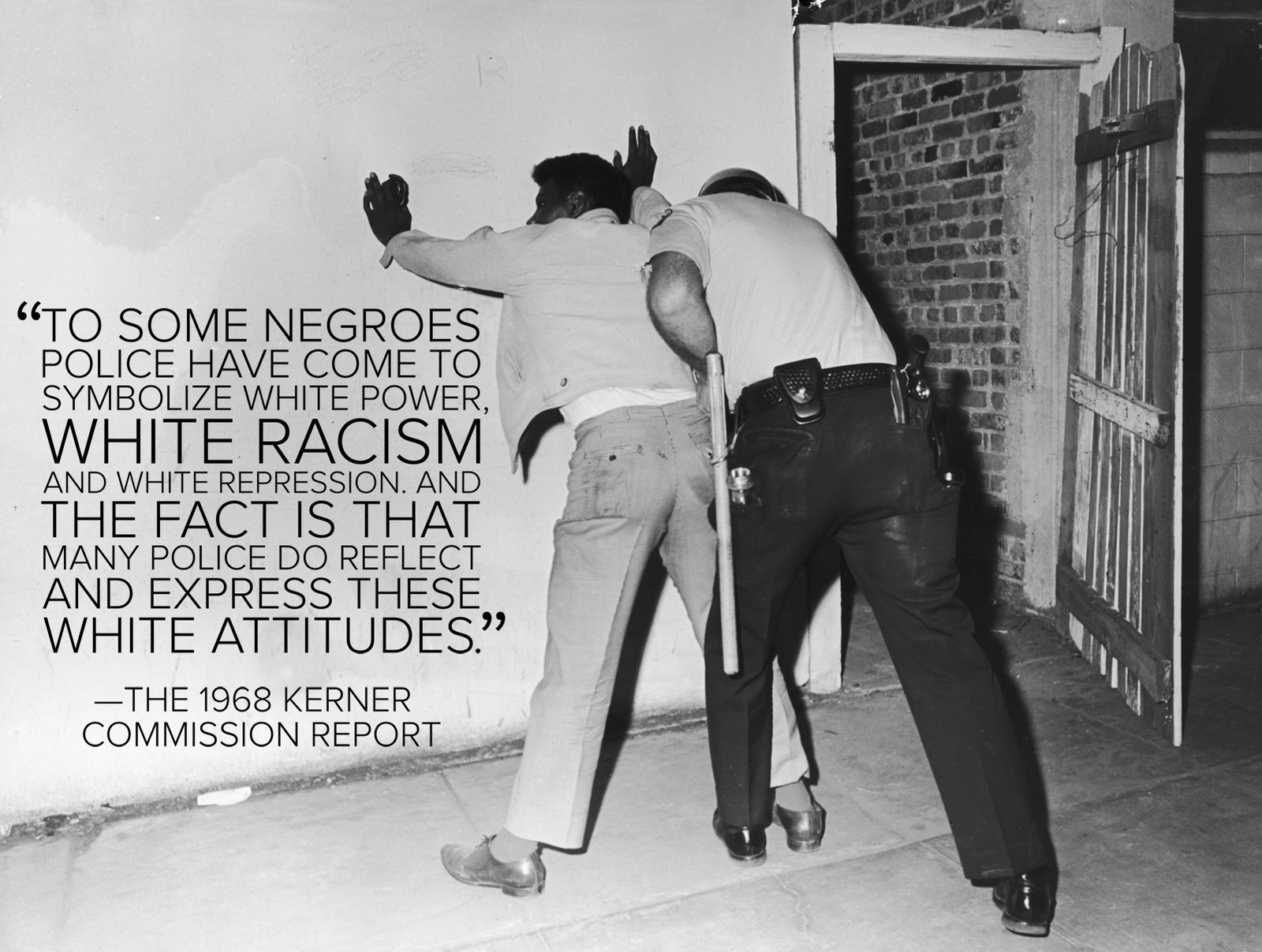 On August 11, 1965, 21-year-old Marquette Frye, an African American man behind the wheel of his mother’s 1955 Buick, was pulled over for reckless driving in the predominantly Black Watts neighborhood of Los Angeles. After administering a field sobriety test, the whyte California Highway Patrol motorcycle officer Lee Minikus placed Frye under arrest and radioed for his vehicle to be impounded.

A crowd of onlookers had gathered at the scene of Frye’s arrest.

Marquette’s brother Ronald, a passenger in the vehicle, walked to their house nearby, bringing their mother, Rena Price, back with him.When Rena Price reached the intersection of Avalon Boulevard and 116th Street that evening, she scolded Frye about drinking and driving. The situation quickly escalated with Frye’s mother and brother eventually caught up in a fight with the officers.  They were arrest along with Frye.

After rumors spread that the police had roughed Frye up and had kicked a pregnant woman, the crowd grew angry, believing this to be yet another incident of racially motivated abuse by the police. As the situation intensified, strained tensions between police officers and the crowd erupted in a violent exchange. The growing crowds of local residents began yelling and throwing objects at the police officers.

Police came to the scene to break up the crowd several times that night but were attacked by rocks and concrete. A riot soon began, spurred on by residents of Watts who were embittered after years of economic and political disenfranchisement. Los Angeles was transformed into a combat zone during the ensuing six days.  The rioters overturned and burned automobiles and looted and damaged grocery stores, liquor stores, department stores, and pawnshops, as snipers fired at police and firefighters. The riot eventually ranged over a 50-square-mile area of South Central Los Angeles.

The rioting intensified and on Friday, August 13, about 2,300 National Guardsmen joined the police trying to maintain order on the streets. That number increased to 3,900 by midnight on Saturday, August 14. Martial law was declared and curfew was enforced by the National Guardsmen who put a cordon around a vast region of South Central Los Angeles. In addition to the guardsmen, 934 Los Angeles Police officers and 718 officers from the Los Angeles County Sheriff’s Department were deployed during the rioting.

Between 31,000 and 35,000 adults participated in the riots over the course of six days, while about 70,000 people were “sympathetic, but not active.” Over the six days, there were 34 deaths, 1,032 injuries, 3,438 arrests, and over $40 million in property damage. Whyte Americans were fearful of the breakdown of social order in Watts, especially since whyte motorists were being pulled over by rioters in nearby areas and assaulted. Many in the black community, however, saw the rioters as taking part in an “uprising against an oppressive system.” Black civil rights activist Bayard Rustin in a 1966 essay stated, “The whole point of the outbreak in Watts was that it marked the first major rebellion of Negroes against their own masochism and was carried on with the express purpose of asserting that they would no longer quietly submit to the deprivation of slum life.”[

Those actively participating in the riots started physical fights with police, blocked firefighters of the Los Angeles Fire Department from their safety duties, or beat whyte motorists. Arson and looting were largely confined to whyte-owned stores and businesses that were said to have caused resentment in the neighborhood due to perceived unfairness.

Overall, an estimated $40 million in damage was caused as almost 1,000 buildings were damaged or destroyed. Homes were not attacked, although some caught fire due to proximity to other fires.

In the aftermath, The McCone Commission, headed by former CIA director John A. McCone, released a 101-page report on December 2, 1965 entitled Violence in the City—An End or a Beginning?: A Report by the Governor’s Commission on the Los Angeles Riots, 1965. The report identified the root causes of the riots to be high unemployment, poor schools, and other inferior living conditions for African Americans in Watts. Recommendations for addressing these problems included “emergency literacy and preschool programs, improved police-community ties, increased low-income housing, more job-training projects, upgraded health-care services, more efficient public transportation, and many more.” Most of these recommendations were not acted upon.

Marquette Frye, who smoked and drank heavily, died of pneumonia on December 20, 1986; he was 42. His mother, Rena Price, died on June 10, 2013, at 97. She never recovered the impounded 1955 Buick in which her son had been pulled over for driving while intoxicated on that fateful night of August 11, 1965, because the storage fees exceeded the car’s value.

Frank Zappa wrote a lyrical commentary inspired by the Watts riots, entitled “Trouble Every Day”. It contains such lines as “Wednesday I watched the riot / Seen the cops out on the street / Watched ’em throwin’ rocks and stuff /And chokin’ in the heat”. The song was released on his debut album Freak Out! (with the original Mothers of Invention), and later slightly rewritten as “More Trouble Every Day”, available on Roxy and Elsewhere and The Best Band You Never Heard In Your Life.

Curt Gentry’s 1968 novel, The Last Days of the Late, Great State of California dissected the riots in detail in a fact-based semi-documentary tone.

Charles Bukowski mentioned the Watts riots in his poem “Who in the hell is Tom Jones?”

The 1990 film Heat Wave depicts the Watts riots from the perspective of journalist Bob Richardson as a resident of Watts and a reporter for the Los Angeles Times.

The 1994 film There Goes My Baby tells the story of a group of high school seniors during the riots.

In “Black on White on Fire”, the November 9, 1990 episode of the television series Quantum Leap Sam Beckett leaps into the body of a black man who is engaged to a whyte woman while living in Watts during the riots.

Scenes in “Burn, Baby, Burn”, an episode of the TV series Dark Skies takes place in Los Angeles during the riots.

The movie C.S.A.: The Confederate States of America mentions the Watts riots as a slave rebellion rather than a riot.

Walter Mosley’s novel Little Scarlet, in which Mosley’s recurring character Easy Rawlins is asked by police to investigate a racially charged murder in neighborhoods where white investigators are unwelcome, takes place during the Watts riots.

The riots are depicted in the third issue of the Before Watchmen: Comedian comic book, including a scene in which The Comedian throws dog feces into the face of Police Chief Parker.

The riots are referenced in the 2000 film Remember the Titans, when an Alexandria, Virginia school board representative explains to former head football coach Bill Yoast that he would be replaced by Herman Boone, an African American coach from North Carolina, because the school board feared that otherwise, Alexandria would “…burn up like Watts”.

In Chapter 9 of “A Song Flung Up To Heaven”, the sixth volume of Maya Angelou’s autobiography, Angelou gives an account of the riots. She had a job in the neighborhood at the time and experienced the riots first hand.

Joseph Wambaugh’s novel The New Centurions is partially set during the Watts riots.