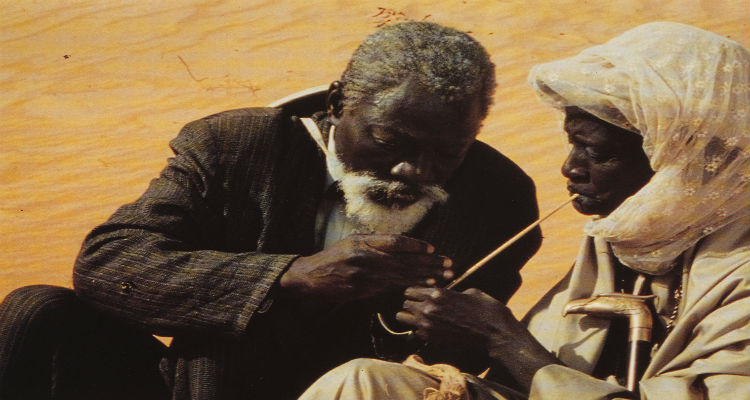 Djibril Diop Mambety was a Senegalese film director, actor, orator, composer, and poet.  Mambety was considered a highly talented and creative filmmaker of exceptional insight and perception because although he made only two feature films and five short films, they received international acclaim for their original and experimental cinematic technique and non-linear, unconventional narrative style

Mambety’s quotes shared below are concern with his film making but also his vision of Afrika and were taken from an interview he did with N. Frank Ukadike, entitled: The Hyena’s Last Laugh: A conversation with Djibril Diop Mambety. A few quotes were also taken via Wikipedia.

1. “Cinema is magic in the service of dreams.”

2. “The word griot…is the word for what I do and the role that the filmmaker has in society… The griot is a messenger of one’s time, a visionary and the creator of the future.”

3. “One has to choose between engaging in stylistic research or the mere recording of facts. I feel that a filmmaker must go beyond the recording of facts. Moreover, I believe that Africans, in particular, must reinvent cinema. It will be a difficult task because our viewing audience is used to a specific film language, but a choice has to be made: either one is very popular and one talks to people in a simple and plain manner, or else one searches for an African film language that would exclude chattering and focus more on how to make use of visuals and sounds.”

4. “Birds know what god is like. They are nearer than Hyenas to god. They are like some kind of elephant whose wings flow in the wind, and African Filmmakers can be birds for reinventing the seventh art. We are perhaps poor in money but so rich by situation and hope”.

5. “I am interested in marginalized people because I believe that they do more for the evolution of a community than the conformists. Marginalized people bring a community into contact with a wider world… Their dreams are not those of ordinary people… Perhaps a marginal person can give you an accurate vision of a society because [they] vary from its norms.”

6. “When a story ends–or “falls into the ocean,” as we say–it creates dreams. It has energy and direction. I hope that all my stories finish by presenting a lesson for society, but there is also great freedom in my way of seeing and treating things. I do the audience justice: they have the freedom to enter or not to enter into my stories. They are free to take their own path, to enter or to leave. In one word, “liberty” is what characterizes what I am doing.”

7. “…My task was to identify the enemy of humankind: money, the International Monetary Fund, and the World Bank. I think my target is clear.”

8. ” I…wanted to pay homage to the beauty of Africa when I made the film (Hyènes). For me, part of that beauty is the fact that it is not very difficult to make a film in Africa. I have a great desire to demystify cinema–especially the financial aspect of cinema. Africa is rich in cinema, in images. Hollywood could not have made this film, no matter how much money they spent. The future belongs to images. Making a film is a matter of love, not money.”

9. “I like the wind very much. Wind is music, just as music is wind. Wind, like music, is the breath of movement and life.”

10. “I do not have a grand explanation of power and madness. I think that the power of madness is one thing, and the madness of power is another thing. Together, they are too heavy for human beings. That is not an explanation or an ideology. In these matters, humans are mere toys.”

The Art of Norman W. Lewis