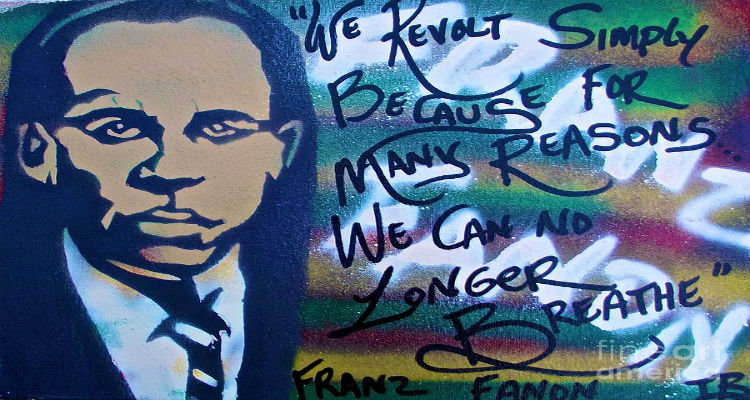 Frantz Fanon was a revolutionary political thinker, originally from Martinique. His book The Wretched of the Earth (1961) is seen as the “bible of Third Worldism.” In addition, his 1952 book, Black Skin, White Masks, offered a penetrating psychological analysis of racism and of the ways in which it is internalized by its victims.

“I am Black; I am in total fusion with the world, in sympathetic affinity with the earth, losing my id in the heart of the cosmos — and the [whyte] man, however intelligent he may be, is incapable of understanding Louis Armstrong or songs from the Congo. I am Black, not because of a curse, but because my skin has been able to capture all the cosmic effluvia. I am truly a drop of sun under the earth.”

“The oppressed will always believe the worst about themselves.”

“Sometimes people hold a core belief that is very strong. When they are presented with evidence that works against that belief, the new evidence cannot be accepted. It would create a feeling that is extremely uncomfortable, called cognitive dissonance. And because it is so important to protect the core belief, they will rationalize, ignore and even deny anything that doesn’t fit in with the core belief.”

“Imperialism leaves behind germs of rot which we must clinically detect and remove from our land but from our minds as well.”

“Two centuries ago, a former European colony decided to catch up with Europe. It succeeded so well that the United States of America became a monster, in which the taints, the sickness and the inhumanity of Europe have grown to appalling dimensions.”

“When we revolt it’s not for a particular culture. We revolt simply because, for many reasons, we can no longer breathe.”

“Each generation must, out of relative obscurity, discover its mission, fulfill it, or betray it.”

“At the level of individuals, violence is a cleansing force. It frees the native from his inferiority complex and from his despair and inaction; it makes him fearless and restores his self-respect… Violence is man re-creating himself.”

“Fervor is the weapon of choice of the impotent.”

“He who is reluctant to recognize me opposes me.”

When I read those inspiring words, I feel a love for my heritage. Africa, live up.