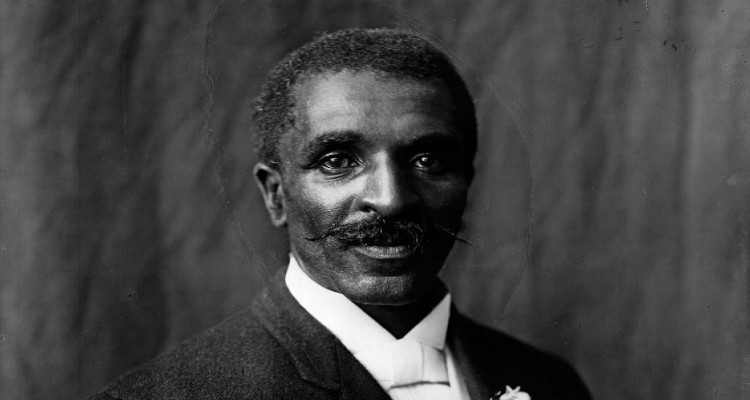 George Washington Carver (1864 – January 5, 1943) was an African American scientist, botanist, educator, and inventor, who produced more than four hundred different products from the peanut, potato, and pecan. The exact day and year of his birth are unknown; he is believed to have been born into the Maafa/Atlantic slavery in Missouri in January 1864. In 1894, he became the first African-American to graduate form Iowa State College. He joined the faculty of Tuskegee Institute in 1896, where he learned to developed a program of research in soil conservation and crop diversification. His scientific work improved the quality of life for millions of people and enhanced agriculture in the South, as Carver would take his mule-drawn ‘movable school’ on weekend visits to impoverished farmlands to teach poor farmers to raise, improve and preserve foods.

Carver is the first African-American scientist memoralized by a federal monument in the United States. On July 14, 1953, the United State Congress authorized the establishment of the George Washington Carver National Monument. It was erected on his birth site near Diamond, Missouri.

1. “How far you go in life depends on your being tender with the young, compassionate with the aged, sympathetic with the striving and tolerant of the weak and strong. Because someday in your life you will have been all of these.”

2. “No individual has any right to come into the world and go out of it without leaving behind him distinct and legitimate reasons for having passed through it.”

3.”Education is the key to unlock the golden door of freedom.”

4. “There is no short cut to achievement. Life requires thorough preparation – veneer isn’t worth anything.”

5. “Whatever you loves opens its secret to you…”

6. “Start where you are, with what you have. Make something of it and never be satisfied.”

7. “Ninety-nine percent of the failures come from people who have the habit of making excuses.”

8. “It is better to be alone than in bad company.”

9. “When you can do the common things of life in an uncommon way, you will command the attention of the world.”

10. “Most people search high and wide for the key to success. If they only knew, the key to their dreams lies within.”

100 Afrikan Proverbs to be guided by…

Say it loud, “I am Black and I am Proud” Quotes