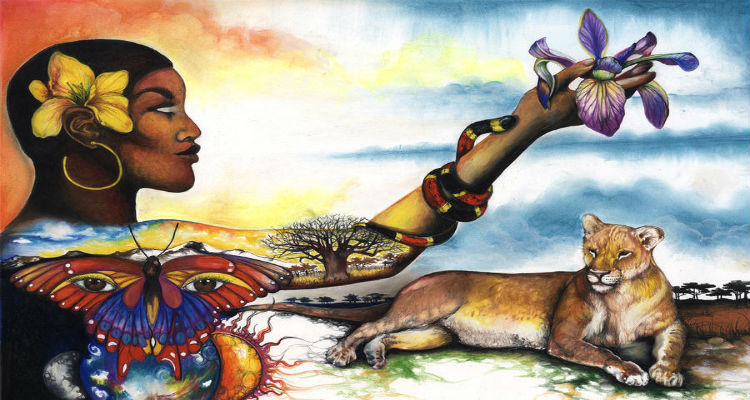 100 Afrikan Proverbs to be guided by…

“We are not a people of yesterday. Do they ask how many single seasons we have flowed from our beginnings till now? We shall point them to the proper beginning of counting. On a clear night when the light of the moon has blighted the ancient woman and her seven children, on such a night tell them to go alone into the world. There have them count first the one, then the seven and after the seven all the other stars visible to their eyes alone. After that beginning they will be ready for the sand. Let them seek the sealine. They will not have to ponder where to start. Have them count the sand. Let them count it grain from single grain. And after they have reached the end of that counting we shall not ask them to number the raindrops in the ocean. But with the wisdom of the aftermath have them ask us again how many seasons have flowed by since our people were unborn.” ~from two thousand seasons by Ayi Kwei Armah

“Afrika — the second largest continent in the world with an area of twelve million square miles — stands at the very beginning of the origin of humanity.” People have lived on the continent longer than anywhere else on the earth. The history of Afrika was already old when other nations were born. For hundreds of thousands of years, Afrika’s people have produced an abundance of proverbs to offer guidance and inspiration. Some of the proverbs have self-evident meaning requiring no explanation; while others are like riddles requiring reflection, or maturity for understanding. Proverbs are assigned such great importance in Afrikan cultures, that those who are able to use proverbs effectively in speech and conversation are held in high esteem in Afrikan societies. “Indeed, it may be said that without a proverb, Afrikans are rarely considered eloquent.” According to the Yoruba of Nigeria, “a wise man who knows proverbs reconciles difficulties.” Also, according to Chinua Achebe, “Proverbs are the palm oil with which words are eaten.”

Let these Afrikan Proverbs inspire you.

1. Where there is love, there is no darkness. ~Burundian

2. There are three friends in life: courage, sense and insight. ~Hausa

3. Beauty is half a God-given favour; intelligence a whole one. ~Fulani

4. Don’t be afraid to look at your faults. ~Yoruba

5. If you do not know where you are going, any road will take you there. ~Uganda

6. Dine with a stranger but save your love for your family. ~ Ethiopian

8. The creator has created lands with lakes and rivers for man to live. And the desert so that he can find his soul. ~Tuareg

9. When a man is stung, he doesn’t destroy all beehives. ~Kenyan

10. The big game often appears when the hunter has given up the hunt for the day. ~Igbo

11. A fully grown up tree cannot be bent into a walking stick. ~Kenyan

12. Anticipate the good so that you may enjoy it. ~Ethiopian

13. May the creator preserve us from ‘If I had known’! ~Hausa

14. Before healing others, heal yourself. ~Wolof

15. Haste has no blessing. ~Swahili

16. Even as the archer loves the arrow that flies, so too he loves the bow that remains constant in his hands. ~Nigerian

17. Silence is also a speech. ~Fulani

18. Around a flowering tree there are many insects. ~Guinean

19. One who rides the horse of greed at a gallop will pull it up at the door of shame. ~Fulani

21. Wisdom is like hair, everyone has their own.” ~Swahili

22. One does not rub backs with a porcupine. (Don’t get involved with someone who can hurt you.) ~Ashanti

23. No matter how hot your anger is it cannot cook yams. ~Nigeria

25. Be it wickedness or be it goodness, neither goes unrequited. ~Yoruba

26. Even if you dance in water, your enemies will accuse you of causing dust. ~Zambian

27. One does not escape fate by running. ~Ibo

28. A friend is someone you share the path with. ~Afrikan

30. We share the same sun but not our homes. ~Kenyan (Advise on taking care of one’s own business.)

31. One who damages the character of another damages his own. ~Yoruba

32. You can outdistance that which is running after you but not what is running inside you. ~Rwandan

33. Two rams cannot drink from the same bucket at the same time. ~Yoruba

34. You must live within your sacred truth. ~Hausa

35. You must eat the elephant one bite at a time. ~Twi

36. Eat when the food is ready, speak when the time is right. ~Ethiopian

37. One cannot stop sleeping because of a fear of bad dreams. ~Ethiopian

38. If you think you have someone eating out of your hands, it is a good idea to count your fingers. ~ Nigerian Proverb

39. By trying often the monkey learns to jump from the tree. ~Cameroon

40. If you plant turnips, you will not harvest grapes. ~Akan

41. The Elephant never gets tired of carrying his tusks. ~Liberia proverb on supporting your own people

42. When you stand with the blessings of your mother and the creator, it matters not who stands against you. ~Yoruba

43. The hands that make mistakes belong to those who work. ~Sesotho

45. The family is like the forest, if you are outside it is dense, if you are inside you see that each tree has its own position. ~Akan

46. Where you sit when you are old show where you stood in youth. ~Yoruba

47. The hunter in pursuit of an elephant does not stop to throw stones at birds. ~Uganda

48. You must be willing to die in order to live. ~Yoruba

49. Before shooting. One must aim. ~Nigerian

50. The one who asks questions doesn’t lose his way. Akan

51. Only a fool tests the depth of a river with both feet. (Don’t leap into a situation without first thinking about the consequences.)

52. By going and coming, a bird weaves its nest. ~Ashanti

53. Strategy is better than strength. ~Hausa

54. You know who you love; you cannot know who loves you. ~Yoruba

56. To love someone who does not love you, is like shaking a tree to make the dew drops fall. ~Congo

57. Although the snake does not fly it has caught the bird whose home is in the sky. ~Akan

58. One should keep one’s eyes on one’s destination, not on where one stumbled. ~Yoruba

59. People are a person’s medicine. ~Wolof

60. A tree does not move unless there is wind. ~ Nigerian

62. If we stand tall it is because we stand on the back so those who came before us. ~Yoruba

63. A student doesn’t know about masterhood but a master knows about studenthood.(A master was once a student and cannot be fooled easily.) ~Mandinka

65. Having a good discussion is like having riches. ~Kenya

66. No matter how good you are to a goat it will still eat your yam. ~Nigerian

67. Lack of knowledge is darker than night. ~Hausa

68. With your hands you make your success, with you hands you destroy success. ~Yoruba

69. There is no medicine to cure hatred. ~Ashanti

70. It is the grass that suffers when elephants fight. ~Kenyan

72. If you want someone more knowledgeable than yourself to identify a bird, you do not first remove the feathers. (When you want an advised judgement on something, do not withhold important facts. ~Ashanti

73. Do a thing at its time and peace follows it. ~Mandinka

74. A lie can annihilate a thousand truths. ~Ashanti

75. The rain does not recognize anyone as a friend it drenches all equally. ~ Ibo

76. The most beautiful fig may contain a worm. ~Zulu

77. Rain beats the leopard’s skin but it does not wash out the spots. ~Ghanaian

79. You do not teach the paths of the forest to an old gorilla. (Respect and listen to your elders) ~Congo

80. Wisdom is like a baobab tree; no one individual can embrace it. ~Ewe

81. However much it rains on you, no wild banana tree will grow on your head. ~ Kenyan

82. Confiding a secret to an unworthy person is like carrying grain in a bag with a hole. ~Nilotic

83. You cannot climb to the mountain top without crushing some weeds with your feet. ~Ugandan

84. A brave man dies once, a coward a thousand times. ~ Somali

85. One arrow can knock down an elephant. ~Kenyan

86. Crying a lot does not give you peace of mind. ~Burundian

87. Not everyone who chased the zebra caught it, but he who caught it, chased it. ~South Africa

88. Whatever is painful does not last, and whoever perseveres smiles. ~Wolof

89. A habit conquers the mind. ~Xhosa

90. No sensible person leaves a stream to drink from a pool. ~Ashanti

91. Do not call the forest that shelters you a jungle. (Do not disrespect or insult someone who shares your burdens and responsibilities or who takes care of you.) ~Ashanti

92. What is unknown to you about a person’s origins will be revealed in his character. ~Wolof

93. Obstinacy does not redeem anyone. ~ Malawian

96. If you are on a road to nowhere, find another road. ~Ashanti

97. The brother or sister who does not respect the traditions of the elders will not be allowed to eat with the elders. ~Ga People of Ghana

98. If your mouth turns into a knife, it will cut off your lips. ~ Rwandan

99. Little by little the bird builds its nest. ~Nigerian

100. Do not follow the path. Go where there is no path to begin the trail. ~Ashanti

If we have missed any of your favourite proverbs, we would appreciate you sharing your proverb below.

Ten Jamaican proverbs you should know

Beautiful words to live by!

I give THANKS to Rachel Jones for sharing this post of African Pearls of Wisdom with us. As you read all 100 (One Hundred) you will find how they touch your Soul. I am an African Man and during this Gregorian Calendar Year ‘2020’ I will set foot on the soil of My Motherland — AFRIKA — This is my Destiny. I give Thanks to Our Creator for placing me on this Journey. I give Thanks to The Ancestors for Guiding me these past 86 years. I am still learning. I find that I have an entirely new approach to Living and I go about this with Love for my Brothers and Sisters.

I now live life by the Forty-two (42) Precepts of Ma’at. Oh how this has shed Light on My Journey. Blessings to All.