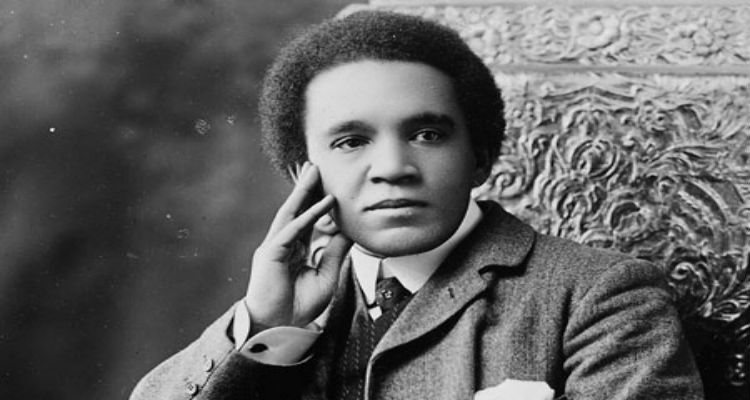 “Samuel Coleridge-Taylor is today all but forgotten in the country of his birth. The works of this talented composer are now out of fashion; and little of his music is available in printed form.”

Samuel Coleridge-Taylor was one of Britain’s outstanding young composers. He called himself an Anglo-African and fought against racial prejudice all his short life. He incorporated black traditional music with concert music, with such compositions as African Suite, African Romances, and Twenty Four Negro Melodies.

Coleridge-Taylor was born in Holborn, London on 15th August 1875. His father, whom he never knew, was a doctor from Sierra Leone; his mother was an Englishwoman. At age 15, he entered the Royal College of Music (RCM) as a violinist, but showing great potential in composition, he swapped violin studies for composition. His career at the RCM was prodigious and productive, and he won the Lesley Alexander composition prize two years running (1895 and 1896). He wrote a number of substantial chamber works including the Nonet (1894) and Clarinet Quintet (1895). When the Clarinet Quintet was revived in 1973, the New York Times critic called it ‘something of an eye-opener…an assured piece of writing in the post-Romantic tradition…sweetly melodic.’

In 1896, he met the African American poet Paul Laurence Dunbar and set some of his poems to music (African Romances), and in 1897 the two men gave joint performances. He also met Frederick J Loudin, former director of the Fisk Jubilee Singers, the choir that introduced African American spirituals to British audiences in 1873. By 1898 Elgar, then England’s leading living composer was describing Coleridge-Taylor as ‘far and away the cleverest fellow amongst the young men.’ A few weeks later came the triumphant Hiawatha’s Wedding Feast, which captivated the public, and established him as one of Britain’s outstanding young composers. Hiawatha was widely performed and became an iconic work for the all-Black Coleridge-Taylor Choral Society of Washington, DC, who invited the composer to America to conduct them in 1904, 1906, and 1910.

However, despite its enthusiastic reception, Coleridge-Taylor personally reaped very little reward for this great work. In order to live, he conducted and taught. From 1903 to his death in 1912, he was a professor of composition at the Trinity College of Music in London, as well as the conductor of the Handel Society, the Rochester Choral Society, and conducted many provincial orchestras.

He visited America on several occasions, at a time when it was still extremely hard, if not impossible for talented Black Americans to fulfill their cultural aspirations, and was therefore seen as a champion for their cause. He met Booker T Washington and President Theodore Roosevelt invited him to the White House. He was received in America much more warmly than in England, where he suffered intense racism. He was, and remained till his death, an ardent supporter of the Pan African Movement.

In 1912, he contracted double pneumonia. On 28 August, Coleridge-Taylor collapsed at West Croydon station while waiting for a train. He died a few days later of acute pneumonia at his home, Aldwick, St Leonard’s Road, Croydon, on 1 September 1912, at the age of 37. Overwork seems to have a contributing factor. At the time he was improving his German, in anticipation of visiting that country.

Coleridge-Taylor was buried in Band on Hill Cemetery, and his funeral became a major public event. A memorial concert produced £1440 for the family: a tidy sum given that Coleridge-Taylor’s income in the year of his death has been estimated at less than £200. The Guildhall School of Music arranged bursaries for both of his children, and they went on to become professional musicians themselves. King George V granted his widow Jessie Coleridge-Taylor, an annual pension of £100, evidence of the high regard in which the composer was held.

Also, after his death, the music world was shocked by the fact that Coleridge-Taylor and his family were not to receive any royalties from the fabulously commercial Hiawatha’s Wedding, one of the most successful and popular works written in the previous 50 years. His case contributed to the formation of the Performing Rights Society, an effort to gain revenues for musicians through performance as well as publication and distribution of music.