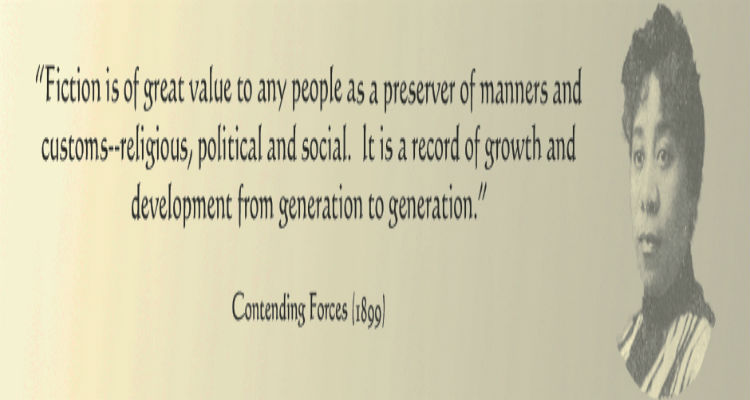 [dropcap size=small]P[/dropcap]auline Elizabeth Hopkins (1859 – August 13, 1930) was a prominent African-American novelist, journalist, playwright, historian, and editor. Hopkins was one of the first writers to introduce racial and social theme – notably the advancement of Blacks – into 19th century romance novels. She believed fiction has great significance for Black people and wrote in the preface of her first novel:

“It is a record of growth and development from generation to generation. No one will do this for us: we must ourselves develop the men and women who will faithfully portray the innermost thoughts and the feelings of the [Black] with all the fire and romance which lies dormant in our history.” 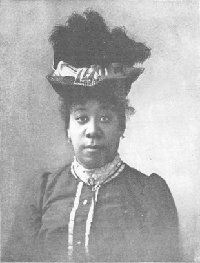 Born in Portland, Maine, Hopkins was taken to Boston while young and graduated from Boston Girls High School. She had her first writing success at fifteen, winning a prize for best essay on Evils of Intemperance and Their Remedy, in a contest among Black students in local schools. She became a playwright in 1879, when the Hopkins Colored troubadours (including her and her family) performed her musical drama called Escape from Slavery later renamed Peculiar Sam.

Her short story Talma Gordon, published in 1900, is often named as the first African-American mystery story. Her most noted novel, Contending Forces: A Romance Illustrative of Negro Life North and South, published in 1900, traces the fortunes of a racially mixed family from 1790 Bermuda to late nineteenth century Boston. Hopkins used her first novel, to explored the difficulties faced by African-Americans amid the racist violence of post-Civil War America, and to impart her ideas about the importance of coupling economic advancement with polictical power and liberal education.

Hopkins began to achieve recognition as a fiction writer in her forties, through her association with the Colored American Magazine (1902-04). She authored serialized novels (some under the name Sarah A. Allen), short stories and dramas, many of which were published in the magazine. When the magazine changed hands in may 1903, she was appointed literary editor; under her editorship its circulation rose to 15,000. Among wwriters the journal published were Frances E. W. Harper and Angelina Weld Grimke.

Hopkins travelled and lectured throughout the USA seeking support for the Colored American and she was a founder of the Colored American League, which tried to gain subsciptions and business for the magazine. Eventually the magazine was sold and moved to New York; Hopkins was initially assistant editor but resigned some months later. She continued to write and edited the short-lived New Era. Hopkins spent the remainder of her years working as a stenographer at the Massachusetts Institute of Technology.

She died in Cambridge, Massachusetts, from burns sustained in a house fire.

In 1988, Oxford University Press released The Schomburg Library of Nineteenth-Century Black Women Writers with Professor Henry Louis Gates as the general editor of the series. Hopkins’s novel Contending Forces: A Romance Illustrative of Negro Life North and South (with an introduction by Richard Yarborough) was reprinted as a part of this series. Hopkins’s magazine novels (with an introduction by Hazel Carby) were also reprinted as a part of this series.

Of One Blood: Or, The Hidden Self is the last of four novels written by Pauline Hopkins. She is considered by some to be the most prolific African-American woman writer and the most influential literary editor of the first decade of the twentieth century, though she is lesser known than many literary figures of the Harlem Renaissance.

Of One Blood: Or, The Hidden Self first appeared in serial form in The Colored American Magazine in the November and December 1902 and the January 1903 issues of the publication, during the four-year period in which Hopkins served as its editor. Elements of the work have been compared to Goethe’s Faust.

Of One Blood: Or, The Hidden Self tells the story of Reuel Briggs, a medical student who does not care about being black or appreciating African history but finds himself in Ethiopia on an archaeological trip. His motive is to raid the country of lost treasures, which he does find. However, he discovers much more than he expected: the painful truth about blood, race, and the half of his history that was never told. Hopkins wrote the novel intending, in her own words, to “raise the stigma of degradation from [the Black] race.” The title, Of One Blood, refers to the biological kinship of all human beings.