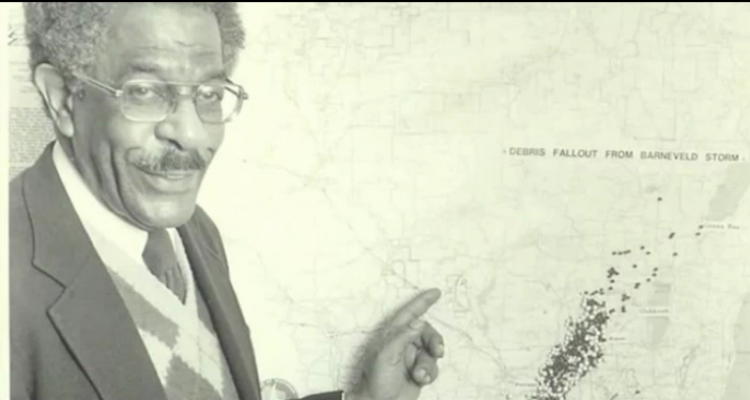 Charles E. Anderson is the first African American to receive a Ph.D. in Meteorology, and to earn national acclaim as an expert on severe storms and tornadoes.

Anderson was born on a farm in University City, near St. Louis, Missouri, on August 13, 1919. His mother and father were from Mississippi. He graduated as valedictorian from Sumner High School in 1937. Anderson received his bachelor’s degree from the Lincoln University, Missouri in 1941, and received high accolades as he graduated third in his class. Lincoln University was also the place where he met his wife-to-be, Marjorie Anderson.

Upon graduating, World War II had begun and Anderson enlisted in U.S. Army Air Forces and was assigned to the meteorology division.  The Army sent him, along with 150 other cadets to the University of Chicago to study meteorology. While there along with an exceptionally heavy academic course load, Anderson also underwent physical training, weapons training, and specific training in military intelligence. In 1943, he received his master’s degree from the University of Chicago, which certified him in meteorology. Anderson also earned a Master of Science in Chemistry in 1948 from the Polytechnic Institute of Brooklyn, New York. He worked at the Air Force Cambridge Research Center in Massachusetts from 1948 to 1961. In 1960, Anderson earned a Ph.D. in Meteorology from Massachusetts Institute of Technology, Boston, Massachusetts. He was the first African American to earn a Ph.D. in Meteorology.

During World War II, Anderson was a captain in the U.S. Air Force . He was stationed in Tuskegee, Alabama where he was assigned as a weather officer for the 332nd Fighter Group now known as the Tuskegee Airmen. After his service in Tuskegee, Anderson became a squadron weather officer and trained fighter pilots across the country. After the war, he held a number of other positions, serving with the U.S. Department of Commerce and with the University of Wisconsin, where he was a professor of meteorology. In 1970, he was appointed professor of Afro-American studies and chair of the meteorology department, and in 1978 he became associate dean of the university. He moved to North Carolina State University in Raleigh as professor in the Department of Marine, Earth and Atmospheric Sciences, where he remained from 1987 until he retired in 1990.

Anderson was a major contributor to a program at the university that has received national recognition for its forecasting of severe storms. In addition to his dissertation for MIT, he did pioneering work in reducing contrails of high-altitude jet aircraft as well as work focused on cloud and aerosol physics and meteorology of other planets.