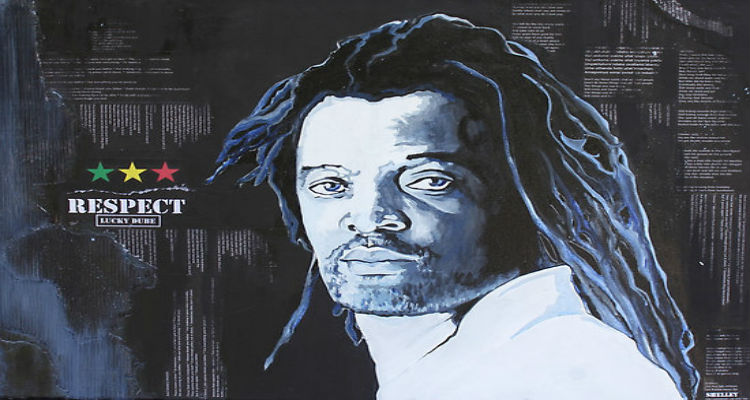 “Musicians have always educated people through music, you know even though now a days a lot of music just talks about sex, women, and drugs. Music I think should be teaching and talking to people about important things in life.”

Lucky Dube was a South African reggae musician and Rastafarian. His song “Together as One” was the first song by a Black artist to be played on a whyte radio station in South Africa. He recorded 22 albums in Zulu, English and Afrikaans. His two most popular albums, Prisoner and Slave, are among the most renowned and best-selling in South Africa’s history. Dube was murdered in the Johannesburg suburb of Rosettenville on the evening of 18 October 2007. 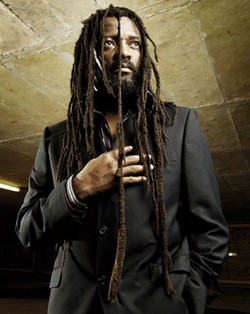 Lucky Dube was born Ermelo Dube (pronounced “doo bay”) on 3 August 1964. His parents separated before his birth and he was raised by his mother who named him Lucky because he was born in poor health, and the doctors thought he would die. His mother also considered his birth fortunate after a number of failed pregnancies. Along with his two siblings, Thandi and Patrick, Dube spent much of his childhood with his grandmother, Sarah, while his mother relocated to work. In a 1999 interview, he described his grandmother as “his greatest love” who “multiplied many things to bring up this responsible individual that I am today.”

As a child Dube worked as a gardener but, as he matured, realizing that he wasn’t earning enough to feed his family, he began to attend school. There he joined a choir and eventually formed a band with some friends, but they could not afford to purchase instruments. Lucky wrote a play which he and his bandmates performed, earning enough money to buy a guitar. Their band was then called Skyway, playing Zulu pop music known as mbaqanga.

While at school he discovered the Rastafari movement. At the age of 18 Dube joined his cousin’s band, The Love Brothers, whilst working as a security guard at the car auctions in Midrand. The band signed with Teal Record Company, under Richard Siluma (Teal was later incorporated into Gallo Record Company). Though Dube was still at school, the band recorded material in Johannesburg during his school holidays. The resultant album was released under the name Lucky Dube and the Supersoul. The second album was released soon afterwards, and this time Dube wrote some of the lyrics in addition to singing. It was around this same time when he began to learn English.

On the release of his fifth Mbaqanga album, Dave Segal (who became Dube’s sound engineer) encouraged him to drop the “Supersoul” element of the name. All subsequent albums were recorded as Lucky Dube. At this time Dube began to note fans were responding positively to some reggae songs he played during live concerts. Drawing inspiration from Jimmy Cliff and Peter Tosh, he felt the socio-political messages associated with Jamaican reggae were relevant to a South African audience in an institutionally racist society.

In 1984, he moved to reggae in his quest to express his anger against the oppression of apartheid. He released the mini album Rastas Never Die, but the record sold poorly – around 4000 units – in comparison to the 30,000 units his mbaqanga records would sell. The apartheid regime also banned the album from airplay in 1985, because of its critical lyrics, for instance in the song War and Crime. However, he was not discouraged and continued to perform the reggae tracks live and wrote and produced a second reggae album, Think About The Children (1985). It achieved platinum sales status and established Dube as a popular reggae artist in South Africa, in addition to attracting attention outside his homeland.

Dube continued to release commercially successful albums. His third reggae album, Slave, sold more than five hundred thousand copies. In 1989 he won four OKTV Awards for Prisoner, won another for Captured Live the following year and yet another two for House of Exile the year after. His 1993 album, Victims sold over one million copies worldwide. In 1995 he earned a worldwide recording contract with Motown. His album Trinity was the first release on Tabu Records after Motown’s acquisition of the label.

In 1996 he released a compilation album, Serious Reggae Business, which led to him being named the “Best Selling African Recording Artist” at the World Music Awards and the “International Artist of the Year” at the Ghana Music Awards. His next three albums each won South African Music Awards. His most recent album, Respect, earned a European release through a deal with Warner Music. Dube toured internationally, sharing stages with artists such as Sinéad O’Connor, Peter Gabriel and Sting. He appeared at the 1991 Reggae Sunsplash (uniquely that year, was invited back on stage for a 25-minute-long encore) and the 2005 Live 8 event in Johannesburg.

In addition to performing music Dube was a sometime actor, appearing in the feature films Voice in the Dark, Getting Lucky and Lucky Strikes Back.

Lucky Dube is considered to be especially remarkable as a Dub Artist due to his lack of a diasporic cultural base. This was particularly due to the nature of Reggae and Dub being a platform for expression of displacement from the homeland. In Prisoner, the South African artist makes the genre his own by applying themes of apartheid and internal displacement. In the song and music video, he is found disturbing the bounds of the genre by highlighting the toils of his own homeland. He was revolutionary in so far as he introduced a competing version to Reggae’s constant tendency of romanticizing the utopian homeland of Africa.

On 18 October 2007, Lucky Dube was killed in the Johannesburg suburb of Rosettenville shortly after dropping two of his seven children off at their uncle’s house. Dube was driving his Chrysler 300C, which the assailants were after. Police reports suggest he was shot dead by carjackers who did not recognize him and believed that he was Nigerian. Five men were arrested in connection with the murder; three were tried and found guilty on 31 March 2009. Two of the men attempted to escape and were caught. The men were sentenced to life in prison. Until his death he was a Christian and refrained from smoking or drinking alcohol in order to set an example for his children and others who looked up to him.

On 21 October 2008, Rykodisc released a compilation album entitled Retrospective, which featured many of Dube’s most influential songs as well as previously unreleased tracks in the United States. The album celebrated Dube’s music and honored the contributions he made to South Africa.