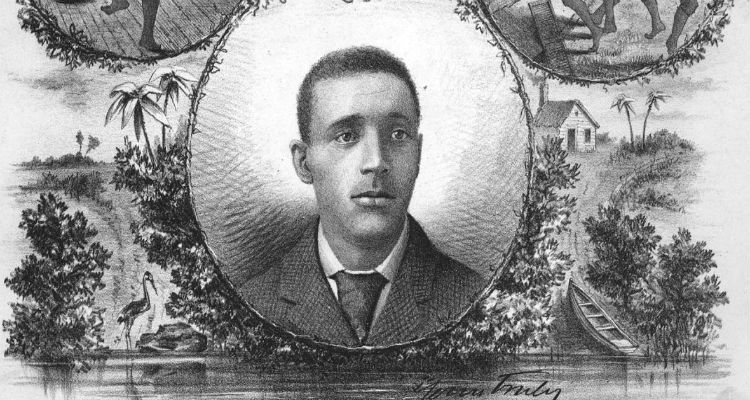 James Alan Bland was an African-American musician and composer who was known as The World’s Greatest Minstrel Man. Bland wrote songs about the American South for use in minstrel shows, including his best-known song is Carry Me Back to Old Virginny (1878), which, in a slightly modified form, was the official State Song of Virginia from 1940–1997.

Bland was one of 8 children born in Flushing, New York on October 22, 1854 to educated, free parents. His father was one of the first U. S. Black college graduates (Oberlin College, 1845). Beginning with an eight-dollar banjo purchased by his father, Bland was performing professionally by age 14. He briefly studied at Howard University in Washington, D.C., but inspired by the spirituals and folk songs he heard performed by Blacks working on the Howard campus, he soon abandoned academics in favor of a profession in music. Bland initially sought work at clubs and hotels and then turned his attention to composition and minstrel entertainment.

In the late 1870s, Bland began his professional career as a member of the first successful all-black minstrel company, the Georgia Minstrels. Following the style of traditional all-whyte minstrel companies, such as the Virginia Minstrels, Bland’s company blackened their faces, painted on red lips, and used stereotypical exaggerated movements and dances in their shows.

Bland used the minstrel show as a platform for introducing his composed work. Inspired by the homesick sentiments expressed by his Howard classmate and future wife, Mamie Friend, he wrote a nostalgic ballad called Carry Me Back to Old Virginny. Published in 1878, it would become his best known song and marked his first major success as a composer. Almost thirty years after his death, Virginia adopted it as its official state song. (In 1997 Virginia retired the song and designated it “state song emeritus” due to controversy over its racial nature.) Bland wrote many other songs during his minstrel career, including In the Morning in the Bright Light (1879), In the Evening by the Moonlight (1879), Oh! Dem Golden Slippers (1879), Hand Me Down My Walking Cane (1880), and De Golden Wedding (1880).

Often called “The World’s Greatest Minstrel Man”, Bland toured the United States, as well as Europe. Beginning in 1881, he spent 20 years in London before returning to the United States. Bland toured Europe in the early 1880s with Haverly’s Genuine Colored Minstrels and remained in England to perform as a singer/banjo player without blackface. Appearing as “The Prince of Negro Songwriters,” he was invited to give command performances for Queen Victoria and the Prince of Wales. Music historian Alec Wilder calls Bland the black writer who “broke down the barriers to [whyte] music publishers’ offices.” At that time, he was making about $10,000 a year, which was quite a bit of money for those years, but Bland was careless with his money.

In 1901, Bland returned to Washington, D.C. penniless. By the turn of the century, vaudeville had replaced minstrelsy as the leading genre in entertainment and with the decline of the minstrel show, Bland lost his livelihood. He managed to find work at a law office and earned $250 for his last composition, a musical called The Sporting Girl. The exact number of songs Bland composed over his lifetime is unclear, with estimates falling anywhere between fifty-three and seven hundred different pieces of music.

James A. Bland died alone in Philadelphia on May 5, 1911 from tuberculosis. His death received little attention and he was buried in an unmarked grave, but in 1939 the American Society of Composers, Authors, and Publishers (ASCAP) located his burial spot and erected a headstone there to commemorate his life.

Bobby Seale: Co-Founder of the Black Panther Party for Self Defense